KARRI MUINONEN: “Asteroid mining for valuable minerals is another good reason to carry out research on these objects” 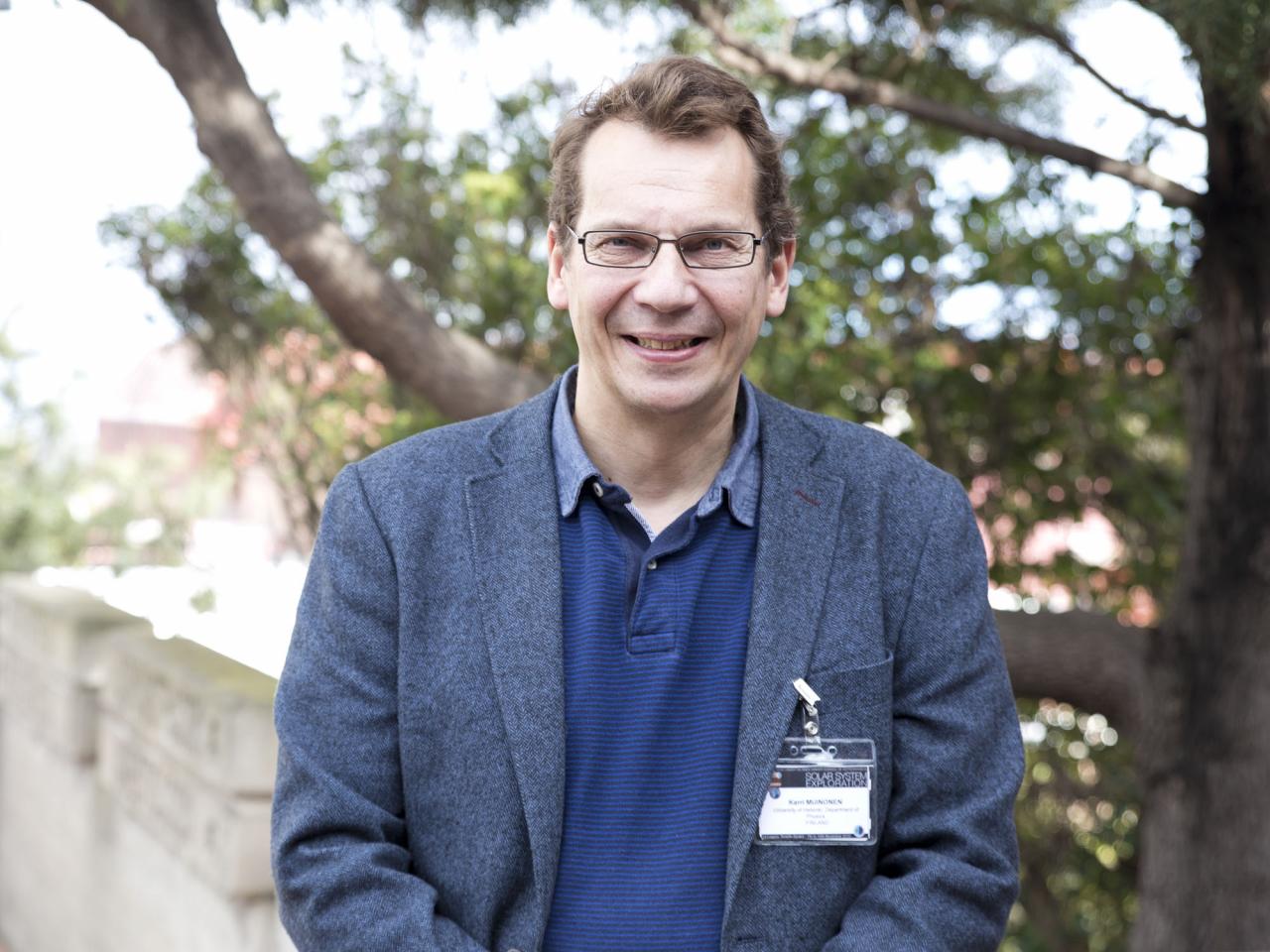 If asteroids do not emit light, a source of primordial information in Astrophysics, how are their properties studied? Karri Muinonen, professor of astronomy at the University of Helsinki (Finland), is precisely a specialist in the physical characterization of these small bodies, key to know the origin and evolution of the Solar System. For this reason, at the XXVIII Canary Islands Winter School of Astrophysics, organized by the Instituto de Astrofísica de Canarias (IAC), this researcher will explain how they are analyzed, both from Earth and from space.

“Near-Earth asteroids pose an impact risk for the future of the human civilization.”

“Small Solar System bodies can have been the carriers of life to the Earth, although this is somewhat controversial, via their impacts on our planet”

“The scientific breakthrough in the interpretation of the polarization characteristics is yet to be made.”

Question: In general, what are the properties of asteroids? Do they have a specific superficial composition or does the composition vary a lot from one asteroid to another? Why is it important study them?

Answer: Asteroids are small Solar System bodies composed of highly varying constituent materials. They reside primarily in the so-called main asteroid belt between Mars and Jupiter. There are, however, large numbers of asteroids in the two Jupiter Trojan clouds, and some asteroids revolve around the Sun in planet-crossing orbits (e.g., near-Earth asteroids).

Asteroids have heterogeneous compositions: there are carbonaceous, stony, and metal-rich asteroids, and even volatiles can be present in the surfaces.

Primitive asteroids are a key to Solar System evolution. Asteroid mining for valuable minerals is becoming a formidable future exploitation opportunity. Last but not least, near-Earth asteroids pose an impact risk for the future of the human civilization.

Q: How can we study the surface of an asteroid from the Earth? And from space? Which properties can we analyze in each case?

A: Ground-based astronomical observations provide a way to study the entire population of asteroids in the Solar System. The astrometric observations allow for the derivation of an asteroid’s orbital elements, whereas the photometric lightcurves enable the derivation of its rotation period, rotational pole orientation, and moderate-resolution shape. Spectroscopic, photometric, and polarimetric observations allow for the physical characterization of an asteroid’s surface properties. Active groundbased radar measurements can reduce the uncertainties in the orbital elements as well as in the rotation state and shape by several orders of magnitude. These measurements further shed light on the structure and composition just below the surface.

Space missions to asteroids can be divided into roughly four categories: fly-by, rendezvous, landing, and sample-return categories. Fly-bys typically provide partial disk-resolved surface imaging data with or without the spectroscopic and/or polarimetric capability. They can also provide estimates on the mass of the asteroid, from the gravitational perturbations on the spacecraft. Rendezvous missions can provide full imaging coverage on the asteroid with an accurate mass estimate together with constraints on the gravitational field by the asteroid and, subsequently, its interior structure. Landing facilitate in situ studies of an asteroid’s surface as well as its interior with a multitude of instruments. Sample return allows for an extensive and detailed physical and chemical study of asteroid surface materials in ground-based laboratories.

Q: What techniques are used to study the composition of asteroid surfaces?

A: Groundbased spectroscopic observations within the UV-Vis-NIR wavelength range is the most common technique to study the composition of asteroid surfaces. Such observations can provide quantitative information about the mineral composition as well as the existence of ices in the surface. Thermal infrared observations further constrain the surface structure: low thermal conductivity normally speaks for a porous, probably particulate structure of the surface, that is, the so-called regolith, a surface layer of loose material composed of particles with varying sizes. For near-Earth asteroids, it is possible to utilize X-ray spectrometers to measure the fluorescence spectra and thereby to map the elemental composition of the surface.

Q: An asteroid does not emit light as a star, so how do we study its spectrum? What can we learn in each part of it? (UV, visible, IR…)

A: Asteroids both reflect the light emitted by the Sun and thermally emit, at longer wavelengths, the light they have absorbed. The UV part of the spectrum gives information about the iron and iron-bearing minerals in the regolith. The visible and near-infrared parts pinpoint to the carbon, pyroxene, olivine, and metal compositions as well as to water and water-bearing compounds in the regolith.

Q: Recently, the OSIRIS-REx NASA probe was launched to study Bennu and learn more about how the Solar System and life on Earth formed. Is this the major purpose for which asteroids are studied or there are more equally important reasons?

A: Studying the formation and evolution of the Solar System is indeed a central argument for the studies of asteroids. On one hand, small Solar System bodies can have been the carriers of life to the Earth, although this is somewhat controversial, via their impacts on the Earth. On the other hand, the future impact hazard is an important reason to study the physical and chemical characteristics of asteroids. Asteroid mining for valuable minerals is yet another good reason to carry out research on asteroids.

Q: After the research carried out on the Solar System, and of all the results obtained, which do you think have been the more unexpected? What result was found and it was a major scientific breakthrough?

A: One of the breakthrough results was obtained by the Apollo missions to the Moon: the lunar craters were shown to be impact craters instead of having a volcanic origin. That result underscores the significance of small Solar System bodies. A different breakthrough was obtained through ground-based polarimetric observations some 80 years ago: atmosphereless Solar System objects were observed to show negative linear polarization near opposition, that is, linear polarization predominantly within the scattering plane, contrary to the well-known positive polarization from Rayleigh scattering and Fresnel reflection. The scientific breakthrough in the interpretation of the polarization characteristics is yet to be made.