Representatives of the Cabildo of La Palma, the Instituto de Astrofísica de Canarias, and the Town Council of Garafía met yesterday at the Roque de los Muchachos to maintain the work needed to set up this important tourist and science outreach infrastructure. Previously they had visited the building to check on the progress of the work which is under way.

The highest point on the island of La Palma was host yesterday to a meeting of the Governing Committee of the Roque de los Muchachos visitor centre. This committee is charged with monitoring the way the project is proceeding, and is composed of three members, one from each of the promoting entities: the President of the Cabildo of La Palma, Mariano Zapata, the Deputy Director of the Instituto de Astrofísica de Canarias (IAC) , Casiana Muñoz-Tuñón, and the Mayor of the Corporation of the Town of Garafía, Yeray Rodríguez.

As well as these three representative, others who participated in the meeting were the Vice-president of the Cabildo of La Palma, José Ádrián Hernández, the Councillor for Tourism of the Cabildo of La Palma, Raúl Camacho, the administrator of the Roque de Los Muchachos Observatory, Juan Carlos Pérez Arencibia, and the Councillor for Public works and Infrastructures of the Town Council of Garafía, José Ángel Sánchez Rodríguez.

After visiting the facilities, the President of the Cabildo of La Palma, Mariano Zapata, gave a positive assessment of the state of the project: “We are pleased because we can see an advance and because we think that it can be completed in the established time-frame”. Zapata reaffirmed the commitment that the centre will be ready before the end of 2021, and stated that 2 million euros will be destined to the exhibits in addition to the 3 million euros for the building. “We are very positive, and really want to see that at last we will have an infrastructure for the island which is so needed, a tourist infrastructure which we have been talking about for far too long.”

For Casiana Muñoz-Tuñón the Visitor Centre “is a tourist centre, but also a centre for general education, both for adults and for children who are just starting to learn, or for those who want to set out on a professional career and are deciding what to study”. To obtain this objective the Deputy Director of the IAC emphasized the necessity to renew periodically the material in the centre. “Our idea is that not only tourists should come, but that all those living in La Palma, and the inhabitants of other islands should be able to find here sufficiently new information that it will be worth their while to make a visit every year; a museum like this cannot be closed and static”, she said “This is one of the missions of our Governing Committee, ensure that there are proposals for renovation and to look for sources of funding to make the renovation viable."

The Mayor of Garafía, Yeray Rodríguez was satisfied with the present state of the project: “We are now looking to the future, seeing how the centre will be run, and fare reaching agreements very easily, which is very satisfactory for all those involved”. For the Mayor, in spite of the delay “seeing it now assuming reality, and having a planned opening date is an achievement of all the participating institutions” he stressed. 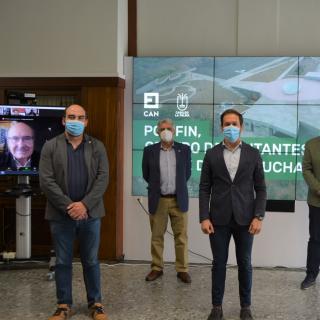 The Cabildo of La Palma, the Town Council of Garafía, and the Instituto de Astrofísica de Canarias (IAC), joined via a videoconference, signed an agreement to collaborate in the management of the future tourist centre which will be devoted to the popularization of Astronomy, and of the natural and cultural heritage of the highest point on the Island of La Palma, were the Roque de los Muchachos Observatory is sited. The President of the Cabildo of La Palma, Mariano Zapata, the Mayor of Garafía, Yeray Rodríguez, and the Director of the IAC Rafael Rebolo participated in the signing. Also 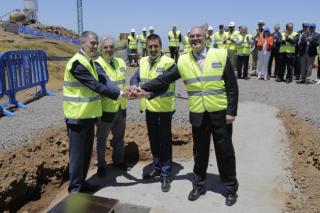 The installations, when built, will serve to boost the island of La Palma as a tourist destination for those interested in the Science and the Astronomy developed in the Archipelago by the IAC and the Canary Observatories