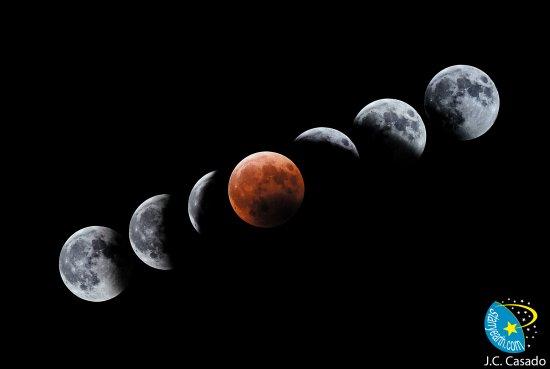 Progress of the total eclipse of the Moon of 4 May, 2004 (Pico Viejo, Mount Teide, Tenerife, Spain). Note the red hue of the Moon (centre image) during totality. ( Photo credit: J.C. Casado - tierrayestrellas.com)
Advertised on
07/04/2014

Could there be a more fascinating site from which to observe an astronomical event than the land of the Incas? The pre-Columbian civilization devoted a great deal of time to the study of the sky and worshipped the Sun god Inti. Charting the movements of the Sun and stars was of prime importance to them, both for religious reasons and because these movements are related to seasonal changes that are crucial for agriculture. The famous Sun Temple (Coricancha) in Cuzco bears the marks of forty-one directions, some of them corresponding to astronomical alignments, such as sunrise and sunset on the June and December solstices.

Lunar eclipses occur when the Moon passes into the shadow of the Earth. This doesn’t happen every month because the Moon’s orbit is inclined at an angle to the Earth’s orbit. Unlike solar eclipses, lunar eclipses are visible from any part of the world if the Moon happens to be above the horizon at the time of eclipse.

On 15 April there will be an eclipse of the Moon that will be visible from the entire American continent and the Atlantic Ocean. If you live in Europe, depending on your location, you’ll be able to catch the Moon’s entry into the penumbra of Earth’s shadow at 06:53 Central European Summer Time (CEST = UT + 2) on 15 April. However, the Moon’s brightness will change very little during this phase, which will last roughly one hour, and will be hardly noticeable. From 09:06 CEST, when the Moon enters the darkest part of Earth’s shadow (the ‘umbra’), the Moon will have set for the greater part of Europe. In fact, the partial phase of the lunar eclipse will only be visible from the Canaries, from 6:58 local time until the Moonset.

‘It’ll be a special eclipse for several reasons,’ says IAC astronomer and leader of the expedition to Peru, Miquel Serra-Ricart. ‘First of all the site, the walls of Saksaywaman, are sacred to the Inca culture. Secondly, the eclipse will form part of a tetrad of total eclipses that will occur within an interval of eighteen months and end with a total eclipse of the Moon on 28 September, 2015, the only one that will be visible from Europe.

A GLORIA team of astronomers will webcast the astronomical spectacle live from the Saksaywaman Inca enclave, a walled temple on the northern periphery of the city of Cuzco in Peru. During totality, internauts will be able to see that the Moon does not entirely disappear from view, but instead takes on a reddish tone. Earth’s atmosphere, which extends 80 km above sea level, acts as a lens, bending the Sun’s light while, at the same time effectively filtering out the blue component and allowing through only red light to the Moon’s surface, hence giving our satellite a coppery hue typical of lunar eclipses (see Figure 1)

GLORA will also observe the event from the peak of Mount Teide. Located on the island of Tenerife, its height is 3750 metres, offering a perfect vantage point for celestial observation. If we view a total eclipse of the Moon from this site at sunrise or sunset, the shadow of the volcano will be perfectly aligned with the eclipsed Moon (see Figure 2). This unique and spectacular phenomenon will be observable during the eclipse of 15 April and will be webcast live.

The images of the webcast will serve to carry out various Educational Activities aimed at secondary-level students (further information at astroaula.net). One activity to underline is the calculation of the size of the Earth’s shadow from images of the lunar eclipse. Each day, images and videos of the various Inca sites visited, together with comments from archaeoastronomy expert and IAC researcher Juan Antonio Belmonte will be uploaded. For information on transmission times and other GLORIA activities, please go to:  gloria-project.eu.

The Canary Islands Headquarters of the Spanish Army (Ministry of Defence)  will collaborate in satellite retransmission from Peru.

The Teleférico del Teide (Teide Cablecar) and SECAT (Tenerife Astronomical Society) will particpate in observing the eclipse from the Summit of Mount Teide (Tenerife).

See also: Live coverage announcement of the total eclipse of the Moon (15 April 2014)