Allande Stars: beyond the stars, closer to our culture

The proyect moved around a part of the zone of Allande, and visited the villages of Berducedo, Monón, Fonteta, and Pola de Allande. Credit: Raquel González Cuesta.
Advertised on
28/08/2020
Authors
SCIENCE COMMUNICATION AND OUTREACH UNIT

The Allande Stars project, funded and supported by the Instituto de Astrofísica de Canarias (IAC), is bringing Astronomy to more than 300 people to the zone of Allande, in Asturias, under the strictest safety measures, and in a spirit of unity under the same sky.

Last weekend saw the activities in the Allande Stars project (www.allandestars.com), an initiative in itinerant science outreach whose aim is to bring Science and in particular Astronomy closer to the rural villages in the south west of Asturias, who in general have less access to museums, cultural lectures, and other similar educational opportunities.

During the 21st to 23rd of August, the inhabitants of the zone of Allande could enjoy activities which were attractive and motivating in which they could learn about the Sun, the planets and the solar system, the space missions which have visited them so far, as well as finding out about the origin of gold, a locally important element as there are lodes of gold in the region.

Both young and old people participated in the activities which made them scientists for a day, and they took a cosmic journey which started on Earth and reached the limits of the known universe. During the journey, the families built their own solar system, faithfully reproducing the sizes and distances to scale, so that they could understand how much space there is between the planets. They also built a gold disc, like the one on the Voyager Missions, describing the qualities and characteristics of their villages, such as their nature, tranquility, hospitality, gastronomy… and the importance of looking after their rural communities and conserving their traditions. In this way, Astronomy was used as a tool for sharing and valuing the local culture and heritage, and to bring home the importance of preserving our planet and its riches. These educational activities were based on the handbook of activities of the Astronomy outreach project GalileoMobile (www.galileomobile.org).

The sky above the zone of Allande has very high quality because of the low level of light pollution. For this reason, at nightfall the participants could enjoy an interpretation of the sky, and the narration of some legends about the more important costellations, as well as observing through telescopes the Moon, Jupiter, Saturn, the Hercules cluster, and the Andromeda galaxy.

As well as giving the population of the zone an incentive to look at the sky, stimulating their curiosity about the universe and encouraging critical thinking, the project’s aim was to give the young girls and boys role models in science, showing them that a scientific career offers them a possible future.

This project, coordinated by Lucía González Cuesta, a predoctoral researcher at the IAC, and winner of the latest edition of the scientific outreach competition “We are men and women scientists” (organized in collaboration with F E C Y T · Ciencia e Innovación ·, MSC en España - Marine Stewardship Council and the CSIC), also included participation by the outreach astrophysicist of the IAC Sandra Benítez Herrera, the coordinator of the educational projects Cosmolab - El Sistema Solar como Laboratorio en el Aula, and Amanar, with experience in itinerant educational projects in rural areas, through the programme GalileoMobile.

The rural council and the cultural associations of the Allande zone took an active part in the organization of the activities, the mobilization of the local people, and the organization of the spaces and classrooms to guarantee the strict conformity with the preventative measures required in the present situation of COVID-19. In the night-time observations the project received the unpayed help of the Cielos Despejados association of Oviedo (http://cielosdespejados.es).

Various types of educational material were donated to each of the schools in the Allande region by the collaborating institutions. We should pick out the Rotary Club La Laguna of District 2201 of the Rotary organization, which donated a telescope, and inflatable solar system, and several books on Astronomy and Astrophysics. In addition, the IAC donated two collections of posters of the educational exhibition “100 Square Moons” and magazines about Astronomy, as well as some IAC tee-shirts and caps to the collaborators in the villages.

In the words of one of the participants in the activities: “It is a privilege to be able to participate in an event like this, more so in a place far from the capital such as Allande. It was attractive for a wide-ranging public, with different sets of ages and prior knowledge about the subject. It is, as well, very inspiring for young people to think that they can make their lives, growing up in this area. One point not to be dismissed is that the people in charge were all female, which goes well and contradicts the concepts which the general public usually have about who is professionally involved in Science”. 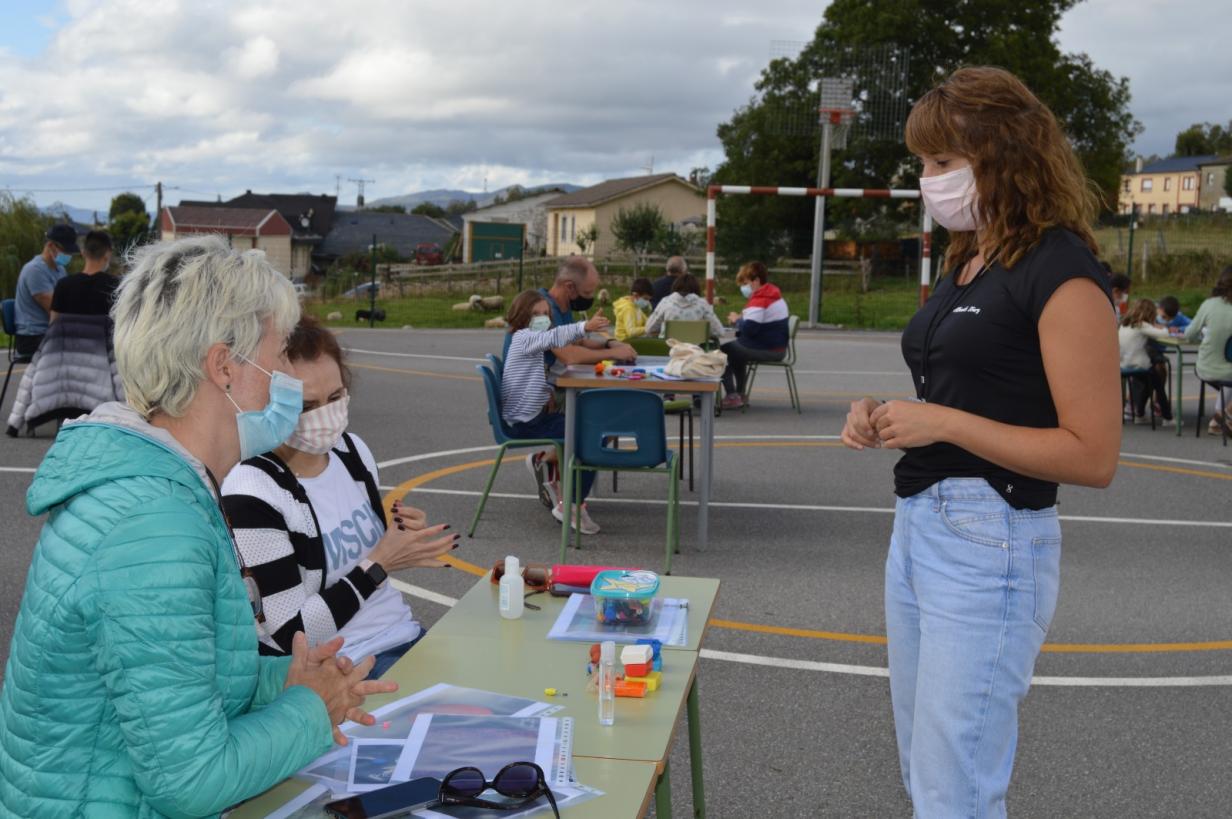