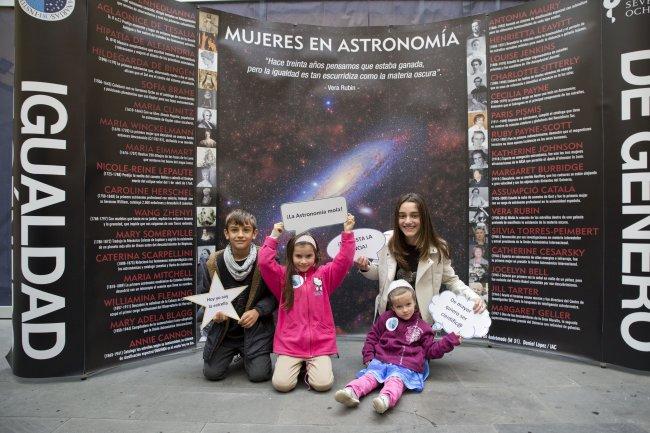 The wind and rain warning in the Canaries last Saturday did not prevent the public, both children and adults, from participating in the International Day of Women and Girls in Science. Families, passers-by who were curious, and many girls and boys made a success of the initiative “HABLA CON ELLAS, mujeres in Astronomía” (“Talk to them: women in Astronomy”) organized by the Instituto de Astrofísica de Canarias with the collaboration of the City Council of San Cristobal de La Laguna and of Wehbe, who gave the use of their covered site in which the activity could be carried out.

Those who came enjoyed a morning full of activities where they could chat with and get to know around 30 women from the IAC, astronomers and engineers in the majority, who organized and participated in this intiative. Meanwhile in the chidren’s corner the youngsters, girls and boys, had a good time discovering and painting constellations and planets and learning how we obtain information about the universe using light. In addition, there was a panel with a summary of the project “No-Nancies” by the astrophysicist and Fine Arts student Pilar Montañés, depicting the lack of gender equality in science and technology using documentary photographs, and also astronomical images and videos. One part of the site was dedicated to the recording of a special sesion of the radio programme dealing with current science “Coffee Break: Señal y Ruido” hosted by the astrophysicist from the IAC Marian Martínez. Finally, members of the public were invited to be photographed in a “photocall” with a picture of the Andromeda galaxy taken with the “Fotomatón cósmico” of the IAC, with material dedicated to 33 women who played significant roles in the history of astronomy.

This activity, organized in the framework of the International Day of Women and Girls in Science, an activity begun in 2016 by the United Nations Organization as a part of its fight to achieve gender equality, was aimed at spreading information about the work performed by the women astronomers and engineers at the IAC, and at stimulating an interest in taking up careers in science and technology, showing that science and technoloy are not only subjects for men.