The GTC finds a mysterious microquasar in the galaxy M81 This object could host a very “special” black hole, according to the authors of the study, advertised in today’s edition of the prestigious journal Nature. 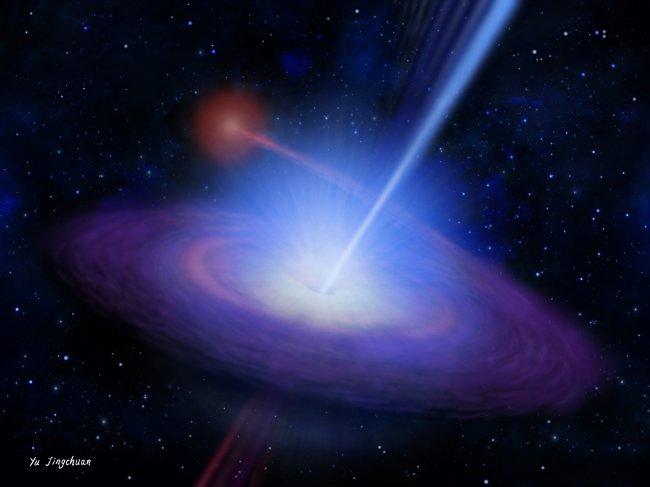 Microquasars are compact binary stars (a normal very massive star and a compact object), which have an accretion disk around the compact object and an intense and variable radio emission, normally as bipolar jets (symmetric jets of matter in opposite directions). The unusual characteristic of the discovered microquasar is that the speed of the ejected material is close to the speed of light (that is known as relativistic jets). M81 ULS-1 is the second microquasar discovered in which emission of relativistic jets has been detected. In this study there has been an attempt to determine whether M81 ULS-1 compact object is a white dwarf or an intermediate mass black hole

The first source with similar characteristics, called SS433, was found in 1979 within the Milky Way. It was found to be an X-ray binary with a period of thirteen days: a very massive star transfers some of its mass to a black hole, from which jets made up of hydrogen stream out in opposing directions at almost one third of the speed of light, in a pattern which is repeated every six months.

From then onwards astrophysicists have looked for similar sources. The object in M81 could be a second SS433, which is why this find is interesting. It is possible to define a type of compact object using its escape velocity. For M81 ULS-1 the measured velocity is 17% that of light, which suggests that it could be a black hole. If it is, this would be a challenge, because the rest of its properties, above all a surprisingly soft X-ray spectrum (soft X-rays are those with higher wavelength or less frequency), would put it in the category of the white dwarfs which we observe in the Milky Way. However it cannot in fact be a white dwarf, because they can generate jets at velocities ten times smaller than those found in M81 ULS-1. It should not really be categorized as an intermediate mass black hole, because its very soft X-ray spectrum indicates a thermal state in which the observed jets could not be produced.

The first author of the article, J-Feng Liu, an astronomer at the National Astronomical Observatory of China and a professor at the University of Chinese Academy of Sciences, explains that “The observations of this microquasar: high luminosities, relativistic baryonic jets at up to 30% of the speed of light, and its supersoft X-ray appearance, all point to a black hole accreting at rates far exceeding the critical rate” (there is a theoretical limit to the accretion rate, known as the Eddington limit). Liu adds that “This type of black holes “disguise” themselves as supersoft X-ray sources that are normally thought as white dwarfs” and that “the discovery shows observationally what happens if a black hole devours way too much”.

The scientists who have made this study propose that it is a stellar mass black hole with relativistic jets: a microquasar, but with peculiar properties, because the other known microquasars emit hard X-rays, not very soft X-rays as this one does (X-rays with energies below one thousand electron volts are termed soft, and with higher energies are termed hard), they accrete at a rate below the Eddington limit, and its jets are highly relativistic, but not baryonic. Stated in another way, the scientists are suggesting a black hole with supercritical accretion (above the Eddington limit). The possible existence of this type of “superaccreting” black hole had been a source of speculation and research for years.

To arrive at these conclusions the identification of a “mysterious” line in the spectrum of M81 ULS-1, which had worried the researchers for five years (2010-2015), was decisive.  The new observations with the Gran Telescopio CANARIAS (GTC) revealed it to be a hydrogen line: the blue-shifted H-alpha line. These observations were made thanks to “Director’s Time” a regime of observations with the GTC which allows observations considered of great interest to be carried out at very short notice. The article in Nature is one more of the over two hundred articles published with data obtained with this telescope, at the Observatorio del Roque de los Muchachos (ORM) on the Island of La Palma.

M81, where the ultraluminous source M81 ULS-1 is situated, is a spiral galaxy not far from the Milky Way, some 13 million light years away from us, and is a seventh magnitude object, sufficiently bright to be observed with binoculars.

Compact objects, with large masses and small diameters, (neutron stars and black holes) emit more energy the more mass they pull in from their surroundings. This is true until they reach the Eddington limit, where the pressure of their radiation stops the accretion. If the object is to be more luminous it has to be bigger. The type of radiation detected from M81 ULS-1 is associated with black holes with ten to twenty solar masses.

A white dwarf is much bigger than a neutron star, and than the event horizon of a black hole. It size is similar to that of the Earth, some 10,000 km. If a white dwarf accretes matter from a companion star the material, hydrogen and helium, accumulates on its surface. If the temperature and density are sufficiently big, nuclear fusion takes place: a huge explosion, a nova, a “bomb” on the surface of the white dwarf. The Sun’s nuclear fusion takes place at its centre. For white dwarfs in suitable conditions, nuclear fusion can occur on the surface if, and only if, sufficient matter is transferred from the donor star so that it “ignites” a stable nuclear process on the surface. This process explains the luminosity which is detected in some cases.

There are several luminous super-soft sources in the Milky Way and in the Magellanic Clouds, two satellites of our Galaxy. At first it was considered that they could not be white dwarfs because this type of luminosity corresponds preferentially to a neutron star or a black hole. However this study has revealed some unusual properties. Now it is thought that they are accreting white dwarfs.

M81-ULS1 was classified as a supersoft source, with a luminosity slightly bigger than that found in the Magellanic clouds. What was surprising was to find high velocity lines, which indicate the presence of relativistic jets, at velocities unattainable for a white dwarf. In other words researchers do not currently believe that a white dwarf can accelerate jets to these velocities. In the article published in Nature it is pointed out that these are velocities which would be expected from a black hole. At the end of the article it is suggested that a black hole accreting at a sufficiently high rate could produce this kind of spectrum. This is speculative, because nothing like it has been seen so far. This is why the system is so interesting.

Not only has a second SS433 been found, but the new source is currently in an unusual state where it emits supersoft X-rays, which is usually attributed to white dwarfs.