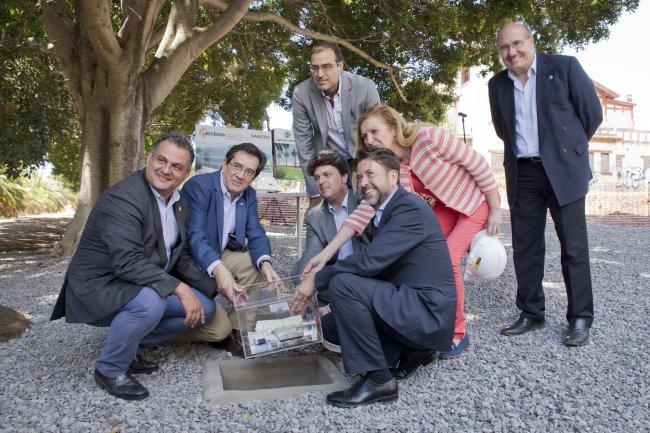 Today the Cabildo of Tenerife celebrated the act of laying the First Stone of the Science and Technology Area which will be constructed in the Science and Technology Park of Tenerife (PCTT) in which IACTec, a centre connected to the Instituto de Astrofísica de Canarias (IAC) will be sited. This installation, with an area of 3,700 m2 will direct its activities to the transfer of technology in the context of large telescopes, microsatellites for space application, and biomedical applications of light. It will also allow cooperation between the public and private sectors both in terms of technology and commercial production, and in this way will contribute to the industrial development and the commercialization of products with high added value in the Canaries.

Following addresses by the various authorities linked to the project a formal document was signed, and this was put into a time capsule, to which the IAC contributed a cube of metal and glass as a metaphor of technology, projection and the future, enhanced with a symbol identifying the IAC as the research centre driving advanced technology transfer.

Rafael Rebolo, Director of the IAC offered thanks for the “very firm support” of the Cabildo Insular of Tenerife, of the City Council of La Laguna, and of the University of La Laguna for finally bringing this project to fruition. “We are a centre” he said “proud of its engineering team, which not only supports the science of the Institute, but also transfers technology to the private sector”. He added that “A team of engineers and scientists is ready to act when this project finishes on December 31st 2017”

The PCTT is situated on the estate called Hogar Gomero, in La Laguna. Its main objective is to stimulate activities in R+D+I, and to promote the creation and consolidation of companies in the field of technology and innovation. It will comprise two buildings and an urban park in which will be included two specialized units: IACTec and Nanotec. These infrastructures are part of the Tenerife 2030 initiative and will be the headquarters for research projects linked to astrophysics, nanoscience, and sustainability, as well as technological development and innovation.