IAU Symposium: Professional and Amateur astronomers, united in the same cause

“When Aleix sent us the first set of images and we opened the second of them there was a huge patch of light in the middle of the image” remembers Raúl Infate-Sáinz, a researcher at the Instituto de Astrofísica de Canarias (IAC) and one of the local organizers of the IAU Symposium The Realm of the Low Surface Brightness Universe organized by the IAC in the Lecture Theatre Complex of the Guajara Campus of the University of La Laguna. “We asked him to repeat it because it wasn’t valid. Five minutes afterwards we received an image in which we saw that he had cut away half of the chimney of his house. He thought that some sort of light source was being reflected from the chimney and had entred the camera. So he just cut off the chimney”

Aleix Roig is one of the driving forces behind the Parc Astronòmic de la Muntanyes de Prades (PAP) and the amateur astronomer who had taken images of the galaxy M101 during a period of six months, to verify the capacity of telescopes which are not professional in performing frontier science. This collaboration started via the scientific outreach podcast Coffee Break: Señal y Ruido which broadcast the proposal made by the IAC researcher Ignacio Trujillo during a talk to the Astronomical Group of Gran Canaria last January.

“This galaxy was observable for only a few hours per night” explains Roig, “and the nights were really good. We were very upset that we were losing 30 to 40 minutes per night because the galaxy was behind a chimney. It was the perfect excuse to obtain more minutes”

“The project” explains Infante-Sáinz, “consists in tested or checking the capacities of amateur telescopes to carry out front rank science in the field of low surface brightness objects observing M101 with the telescope, in this case, of Aleix Roig”

“My work” explains Roig “is to follow the indications of the research team which uses the images to obtain scientific data. The instructions are aimed, first and foremost at how to take the images, the frame I have to take, the rotations of the field needed for each image, and the sky conditions. The job of the team was to look carefully at the data which I was sending from home to ensure their validity”

“The observations lasted six months in all, including some 30 to 40 nights’ observing” explains Roig. “There were nights when we could only take 20 minutes of image because the Moon came out, or because of cloud. But there were also very good nights, when I could use 3 or 4 hours.

“We, for our part, took care of the data reduction and analysis using professional criteria” says Infante-Sáinz ”so that we could see what we could obtain from the observations in order to do first grade science at low surface brightness”

Collaboration between professional and amateur astronomers is by no means usual. “This is in general because of the amount of work needed” explains Infante-Sáinz”. “Amateur astronomers usually make simpler observations. They point their telescopes but do not take such detailed care of the observation, make the correct displacements and rotating the camera, which entails work in the reduction and analysis of the data, which in this case we are doing at the IAC”

But working with amateur astronomers has its advantages. “In this case” says Ignacio Trujillo, an IAC researcher and another of the conference organizers “the advantage of using small telescopes is that they can observe over a wide field. Professional telescopes observe very small areas of the sky. If you want to study nearby galaxies with the Gran Telescopio Canarias (GTC) you would take virtually more time than with a small telescope which could cover the whole field at one go:” He explains that “The diameter of Aleix’s telescope is only 8.5 centimetres, but it covers a field of some 2.24 x 1.7 degrees, which is the equivalent of 5 full moons across a diameter, while the field of the GTC has a diagonal a bit smaller than one third of that of the Moon. So that when you want to observe objects which are very near and need to cover a large

“The result we have obtained is that with a very careful and professional reduction of the data, we can reach the level of professional observatories in the quality of the image which we will then be able to analyse” summarized Infante-Sáinz, to which Trujillo adds “It has been a pilot study, to see how far amateur telescopes can go, and if they do the job, to make major use of them”

Infante-Sáinz and Trujillo are in agreement that the collaboration should continue, and Roig concludes by saying “It is very encouraging that the data, and the effort not only have been worthwhile, but that they open the door to a collaboration. I am now very motivated to keep on providing data with this telescope, or with other small diameter telescopes, if I have observing time at my disposal, which is the key to this work”

David Valls-Gabaud, of the Paris Observatory, and another of the organizers of the conference adds, in support: “Amateur astronomers can play an important role, so that it is good to break down the barriers that seem to exist between professionals and amateurs with more Pro-Am programmes in astronomical research”.

IAU Symposium 355: The Realm of the Low Surface Brightness Universe 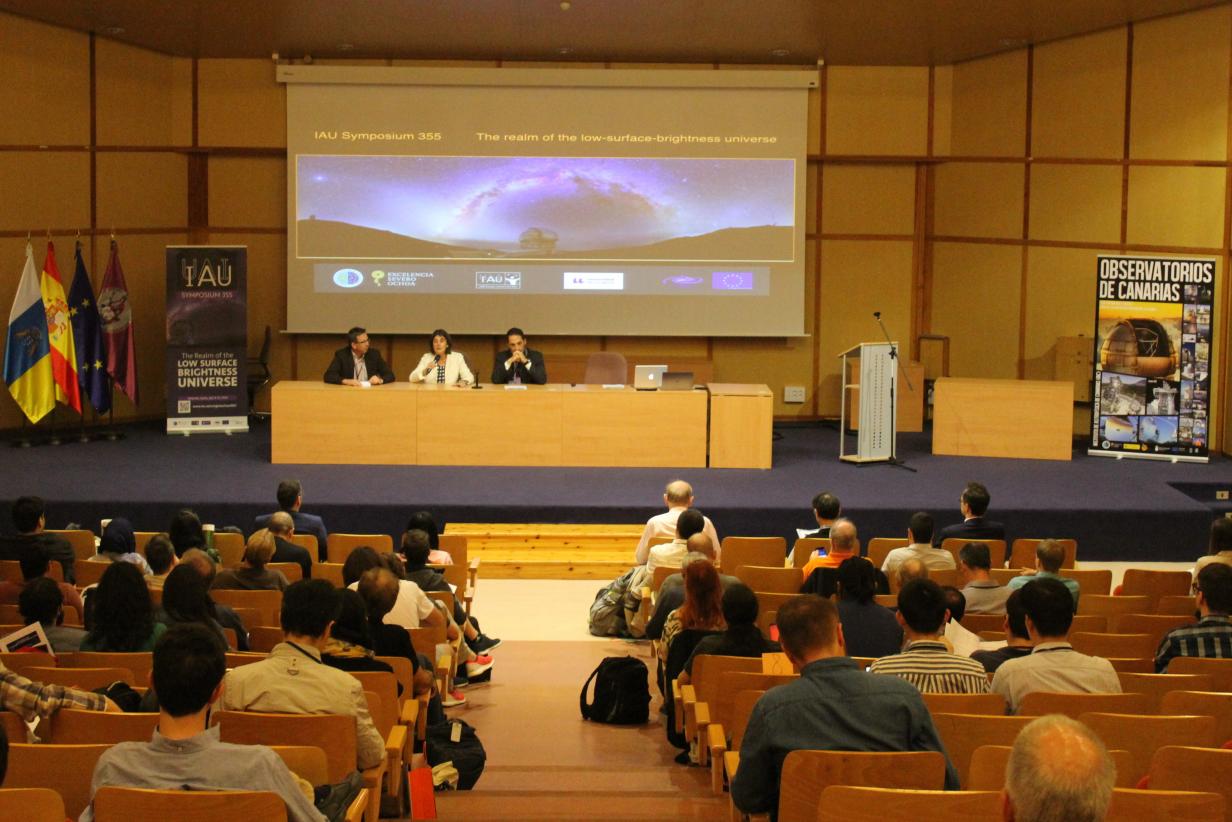