JUAN CRUZ: “The Canaries has to make a claim for itself as a place for science and technology" 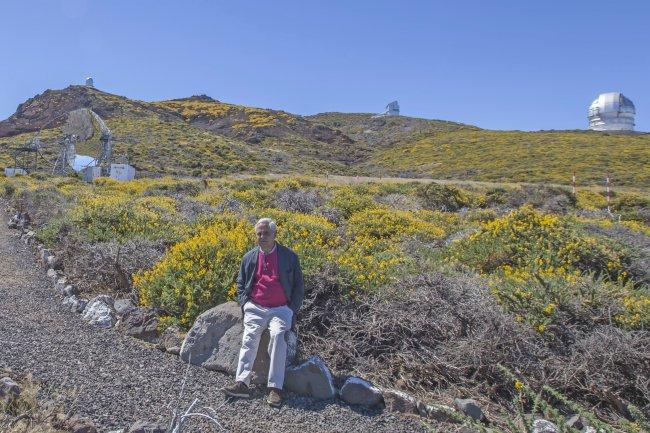 “Observing the Earth, the seas and the sky has always been a means of inspiration throughout history, and now, with everything that I have learned, I take away the impression that I am even smaller than before. If we really knew about these matters we would be more humble. I am fascinated by this sky”.

This was how Juan Cruz explained his positive experience in the Archiepelago after visiting the Instituto de Astrofísica de Canarias (IAC) and the Teide and Roque de los Muchachos Observatories. The journalist and writer is the third of a series of authors who are participating in the IAC’s multidisciplinary project “En un lugar del Universo…” which celebrates the IVth Centenary of the death of Miguel de Cervantes by merging Astronomy and Literature. The project invites them to set down their vision of astronomy, which they will put into a volume of short stories whose aim is to fund a project to help with Alzheimer’s disease.

The international scientific institutions at the Canary Island Observatories as well as the Museum of Science and the Cosmos, of Museums of Tenerife, are participating in the project, which is also supported by the Cervantes Institute and by funding from the Severo Ochoa Programme

The first stop for Juan Cruz was the Roque de los Muchachos Observatory in Garafía (La Palma). There he toured some of its installations, such as the Gran Telescopio CANARIAS (GTC) the Belgian Mercator Telescope, the telescopes of the Isaac Newton Group and the MAGIC telescopes, and he enjoyed a night time astronomical observation after sunset.” I am fascinated by this sky, its clouds and the sun, which hides and gives way to an extraordinary sky which makes the Canaries one of the great astronomical capitals of the world” said the writer. He also visited the Real Sociedad Cosmológica of Santa Cruz de la Palma, in an event organized by the Cabildo Insular of La Palma.

Yesterday, he visited the IAC headquarters in La Laguna, where as well as getting to know the Instrumentation Division, and technology projects, he met with scientists and engineers who told him about the activities at the IAC. Afterwards he went up to the Teide Observatory at Izaña (Tenerife) and saw some of the telescopes such as the QUIJOTE experiment, the solar laboratory, and the Optical Ground Station (OGS)

Finally this morning he visited the Museum of Science and the Cosmos, of Museums of Tenerife, where he could discover scinece in an attractive, interactive way, and where, together with the Vic-president of the Cabildo of Tenerife, Aurelio Abreu, he had a meeting with the media to share impressions about his experience in the Canaries, and the project “In a certain place in the Universe…”

The sky as a leitmotiv

If Juan Cruz picked out anything about his stay in the islands this week it was the passion with which the people he met carry out and explain their work. “Among them”, said Cruz “I find a huge enthusiasm for explaining and this has come through to me. If I manage to convey this, it would be fantastic”. The sky, the object of study by astrophysicists, was also an inspiration and an obsession for him during these days. “I have been asking everyone what the sky said to them, what it talked about”. And he stated that this would be the leitmotiv for his next literary creation “Why not use this vast treasure we have to bring people to feel and learn with curiosity?”.

However, he regretted that the institutions do not value sufficiently the scientific importance of “this place without limits which is the IAC and the Museum of Science and the Cosmo. It makes me angry that such an important place for scientific research is not sufficiently recognized. The Canaries has to make its claim as a place for science and technology, and we need to use it” he concluded.