JULIA DE LEÓN: “We know very well the orbits of over 90% of the asteroids which could cause a world-wide catastrophe if they impact on Earth” 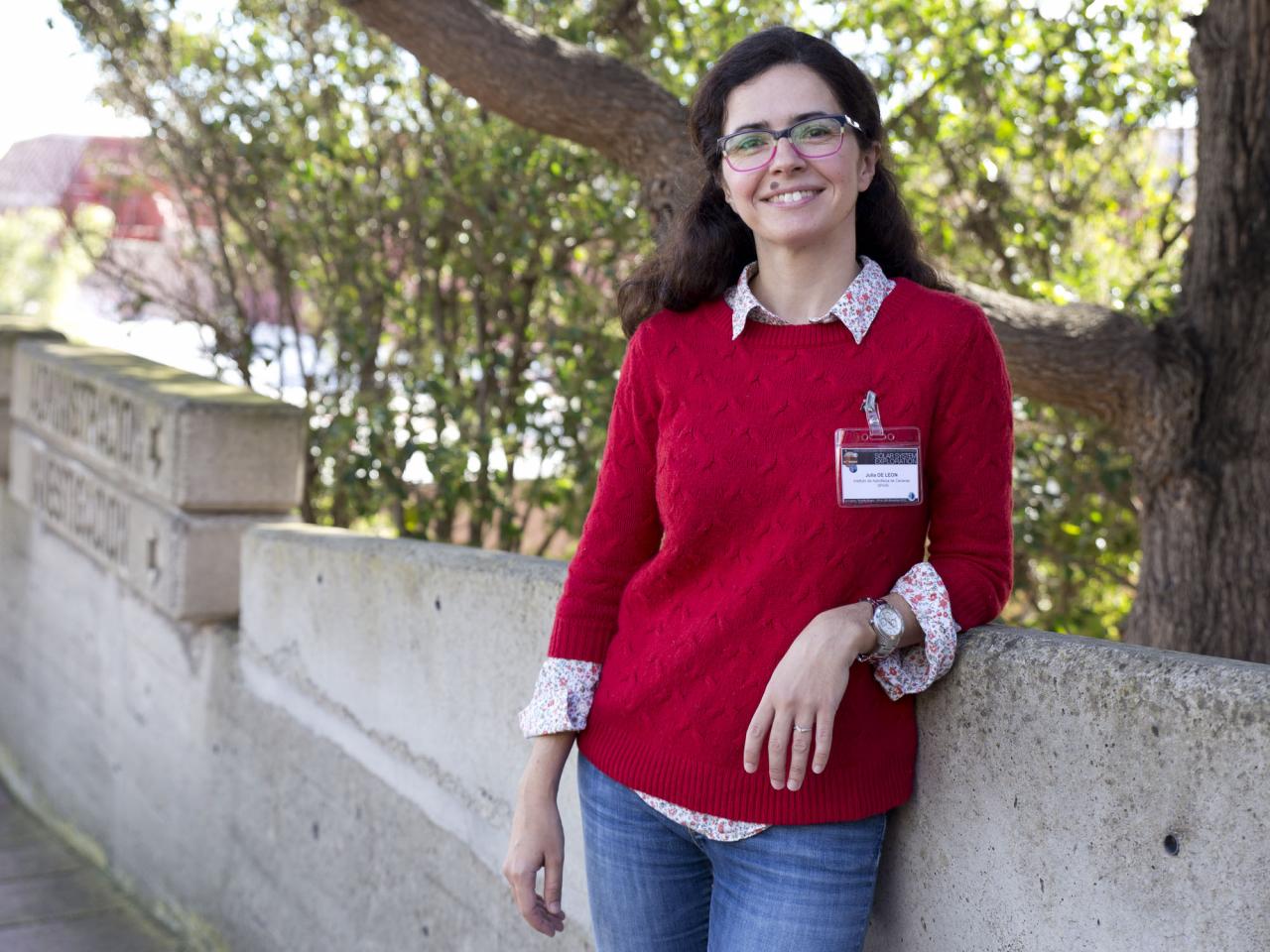 Between her stay at the Roque de los Muchachos Observatory, in Garafía (La Palma), where Julia de León was gathering data for her PhD thesis on over a hundred asteroids, and the NASA space missions in which she is now involved, there have been years of enormous effort and observations. In La Palma she began to specialize in the mineral composition of asteroids, and as the years have passed her research is still oriented towards discovering what is happening on objects which are a thousands of kilometres from us, to understand better what is happening here on Earth. Today this researcher at the Instituto de Astrofísica de Canarias (IAC) who has also worked at the Instituto de Astrofísica de Andalucía (IAA) and in the group of Planetary Science of the University of La Laguna (ULL) is one of the organizers of the XXVIII Canary Islands Winter School of Astrophysics, and will give one of the courses, on the processing of the images of planetary surfaces.

“We are at a peak of activity in Solar System exploration, and this year 2016, in particular has been very intense.”

"The loss of the Schiaparelli module only reveals the complexity of these missions. We have become used to succeed in everything we planned."

Question: At the present time what missions are there for studying the surfaces of asteroids and planets? What are their aims?

Answer: We are really at a peak of activity in our exploration of the Solar System, and in particular this year, 2016, has been very intense. Right now we have the NASA mission Dawn, which analyzed the surface of the asteroid Vesta, and which is completing a study of the dwarf planet CERES; the mission OSIRIS-REx, which has just been launched (8th September) and which will travel to the asteroid Bennu to bring back samples from its Surface, the missions to Mars, including the Rovers which are studying its surface (Curiosity and Opportunity); and the Juno mission, designed to study Jupiter, and which in July of this year went into orbit round that planet. In addition the Japanese Space Agency (JAXA) launched the mission Hayabusa 2 in 2014, to bring back samples from the asteroid Ryugu, and it should arrive at its destination around the middle of 2018. The European Space Agency (ESA) we should pick out the Rosetta mission, which finalized in September, and was an unprecedented success, and the mission ExoMars, for studying Mars, which a few weeks ago entered into orbit with the planet and whose loss of the Schiaparelli module only reveals the complexity of these missions. We have become used to succeed in everything we planned.

Q: What future missions are planned?

A: In January 2017 there is the planned launch of the BepiColombo mission, a collaboration between ESA and JAXA, to study Mercury. Not long ago, the Juice mission, also by ESA, was approved, to be launched in 2022, and which is aimed at the study of Jupiter and three of its moons (Ganymede, Callisto and Europa). We also have extended missions, such as Cassini-Huyghens (NASA-ESA) which flew past Pluto last year and will go on to explore the Kuiper belt.

Among the missions which have been proposed but not so far approved, there are various by NASA: The first, Europa, is to study this icy moon of Jupiter, and the second, the spectacular Asteroid Redirect Robotic Mission (ARRM), which should visit a near Earth asteroid (a “NEA”), collect a rock weighing several tons from its surface, and direct it to a stable lunar orbit, where it can be studied by astronauts.

Q: How do we study the surfaces of asteroids? Can we get to know the internal composition of an asteroid by studying its surface?

A: We study the surfaces of planets and asteroids by taking images with a high resolution camera. Then we analyze the morphology of the surfaces in great detail, and find a wide variety of geological structures: craters, mountains, valleys, rocks, and so on. Using a set of filters, or preferably using a spectrograph, we can also get information about the composition of these surfaces.

Although we cannot obtain information about the interiors of these bodies directly from surface diagnostics, we can infer it by studying the material from zones which have been exposed, as is the case for the craters, and by gathering information on the mass and the density of the object.

Q: To handle the huge quantities of information obtained by space missions, are there very sophisticated and powerful programmes which help with the analysis and the processing? How do these programmes work? What kind of information can you get out of these images?

A: We should not forget that the images we obtain from cameras on spacecraft are two-dimensional projections of a three-dimensional surface. So we need to correct effects which are simple, such as that the shadow projected by a raised piece of terrain can be confused as a darkening of material due to a different composition. For that reason, the programmes are complex  and incorporate a great deal of information form the sensors on the spacecraft, which are used for spatial reference, and help to map the surface and make a shape model, a 3D rendering which can eliminate this kind of errors.

Q: Is it essential to know how to use them?

A: Yes, if you want to work with images from space missions. In any case, these programmes use many formats which are standard, and known to astronomers who work in image analysis (the FITS format, for example), so that with specific it is relatively easy to learn to use these programmes to optimize the results obtained.

Q: At the present time you are a member of the science group of the OSIRIS-REx mission. What is your role, and what are the objectives?

A: I form a part of the Image Processing Working Group (IPWG) and among the jobs assigned is to prepare for when we begin to receive the images from the asteroid. Basically we are training on the use of the software (ISIS3), using images from past missions. We also have the task of making colour maps of the surface, which means studying its composition, and deciding on the best site for collecting the samples.

Q: Using catalogues such as SDSS, PRIMASS, VISTA VHA, J-PLUS, and the GAIA mission, many asteroids in the Solar System have been identified and characterized, and even though not al lot them orbit within the well-known Asteroid Belt, between the orbits of Mars and Jupiter, can we find the orbits of the "straying" objects, to calculate possible impacts with other bodies, or even with space vehicles? And if a close approach implying a possible collision is detected, what factors would enable this to be anticipated and even avoided?

A: The "straying" objects are none other than the so-called “Near Earth Objects” and the term “potentially harmful” (PHA) has recently been coined for those which are dangerously near. This is a particularly worrying phenomenon, and a lot of resources are being devoted to identify these objects, and obtain the best possible information about their orbits.

Fortunately, at the present time we have identified, and know very well, the orbits of over 90% of the asteroids with diameters greater than 1 km, which are those which would cause a world-wide catastrophe if they impacted the Earth. Nevertheless smaller ones, which could also cause serious problems if they collided with Earth, are more difficult to detect. So it is very important to monitor them continuously, because every time they pass close to the Earth its gravity causes a slight modification to their orbits, and the impact probability changes too. The best way to anticipate a possible collision is to devote resources to detecting them and to studying them continuously.