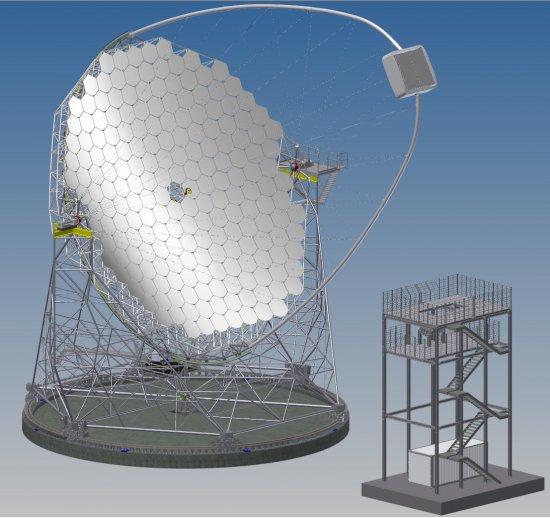 The ceremony will be performed in two parts. In the first, the principal investigator of the telescope, Masahiro Teshima (member of the ICRR Tokyo and director of the Max Planck Institute for Physics, Munich) and Manel Martínez (member of the IFAE) chair of the steering committee of the LST, will explain to the authorities the telescope’s structure and functions. In the second, a bakelite plaque will be unveiled on which there is a bas-relief representation of the telescope

After that there will be an address by Rafael Rebolo, director of the Astrophysics Institute of the Canary Islands (IAC), Takaaki Kajita, director of the Institute for Cosmic Ray Research (ICRR; Tokyo), Martín Taño, the Mayor of Garafía; Anselmo Pestana, President of the Cabildo of La Palma; Carmen Vela, Secretary of State for Research, Development and Innovation, and  Fernando Clavijo, President of the Autonomous Regional Government of the Canary Islands. Also present there will be representatives of the institutions which form the LST collaboration, members of the institutions which make use of the Roque de los Muchachos Observatory, and a big group of other authorities. It turns out that there is a welcome coincidence that yesterday it was announced that Takaaki Kajita had been awarded the Nobel Prize for Physics (along with Arthur B. McDonald) for the discovery of neutrino oscillations, which prove that they have mass.

The project of the prototype of the LST is led by Masahiro Teshima and the co-leader is Juan Cortina (member of the IFAE Institut de Física d’Altes Energies, Barcelona). Japan, Germany, and Spain are the main contributors to the LST consortium, in which further participants are France, Italy, Brazil, Sweden, India and Croatia. In Spain, the members of the collaboration are the Institut de Física d’Altes Energies (IFAE), the Institut de Ciències de l’Espai (ICE-CSIC-IEEC), the Centro de Investigaciones Medioambientales y Tecnológicas (CIEMAT), the Institut de Ciències del Cosmos (ICC-UB) and the Universidad Complutense de Madrid (High Energy Group, UCM-GAE, and Electronics, UCM-ELEC).

The dimensions of the LST are huge. As well as the large diameter of its mirror (23 metres), the camera which detects the light produced by the gamma rays has a diameter of 3 metres, and is one of the most complicated and rapid cameras in the world. This camera will be assembled and commissioned by the IFAE, with technology developed by all the Spanish groups which take part in the collaboration.

The prototype telescope LST, which will be used to validate the large sized telescopes of the CTA (Cherenkov Telescope Array) could become the first telescope of the array when the agreement between Spain and the CTA consortium, by which the CTA-North is installed in the island of La Palma, comes into force. The CTA will be a major scientific infrastructure comprising 100 telescopes divided between two observatories (North, and South). There are 30 countries participating, with some 1500 engineers and scientists. Its objective is to study the astrophysics of very high energy gamma rays, allowing us to further our knowledge of the most violent and “extreme” aspects of the universe.

The Cherenkov telescopes do not detect gamma rays directly, but measure the effects they cause on interaction with the molecules of the Earth’s atmosphere generating an electromagnetic cascade. This type of radiation lets us study those physical processes, which release the biggest quantities of energy in the universe, among them supernova explosions, black holes, “microquasars”, active galactic nuclei, and gamma ray bursters. CTA will also allow us to search for dark matter and to study the possible quantum structure of space-time.

Institutions of the LST consortium