Little Stars from the early Galaxy 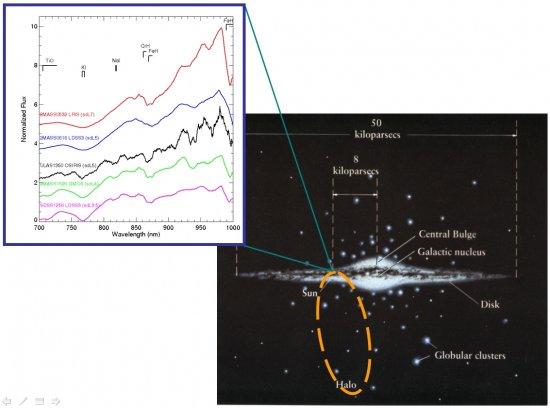 Left: comparison of ULAS1350 with the other four known L subdwarfs previously known. Right: Artist view of the orbit and position of ULAS1350 in our Galaxy. As it can be seen from the figure, subdwarfs are located in the halo of our Galaxy. Credits: Nicol
Advertised on
18/12/2009

A new object with an age of thousands of millions of years and a mass of one tenth of the Sun, placing it at the frontier between low-mass stars and brown dwarfs, has been discovered as the furthest of its class in Milky Way. Nicknamed ULAS1350, this subdwarf could become on of the key element to improve our knowledge on the first steps of the formation of our Galaxy.

The team of European astronomers responsible for the discovery, composed of members of the Instituto de Astrofisica de Canarias (IAC) and Centro de Astrobiología (CAB) needed only 35 minutes to analyse the source with the Gran Telescopio CANARIAS (GTC), located at the Observatory del Roque de Los Muchachos on the island of La Palma. This new discovery, published today in the Astrophysical Journal, constitutes the first scientific refereed publication using data obtained with the largest optical-infrared telescope in the world.

ULAS1350 has been classified as a subdwarf of type L and is the fifth of its class to be discovered to date and the first one confirmed by the GTC. These objects represent ideal candidates to search for extrasolar planets due to their small size and low mass, both closer to a giant planet than a solar-type star. "We concentrated our efforts on this class of old stars, not only because they are only four known to date but also because they are key objects to understand the formation of the Milky Way", says Nicolas Lodieu, lead author of the Letter appearing today in the specialized journal.

The stellar relic is located at a distance of 300 to 550 light years from the Sun, hundreds of light years further than its four counterparts. The most important features of this object could be observed at optical wavelengths thanks to the OSIRIS spectrograph currently installed on the GTC. "Its metal content may be as low as one tenth of the solar abundance", says Lodieu who adds that "we were also able to confirm its low luminosity and estimate its temperature between 1000 and 2000 degrees centigrade".

This cold star, whose temperature is up to five times lower than the surface of the Sun, was identified in the Large Area Survey of the UKIDSS (UKIRT Infrared Deep Sky Survey) catalogue, a large scale survey conducted in the near-infrared with the 3.8-m telescope located on the summit of the island of Hawaii. The relative dearth of metallic elements in the atmosphere of ULAS1350 compared to the Sun was confirmed with the help of complementary wide-field optical survey, the Sloan Digital Sky Survey. "We expect to identify new candidates thanks to the larger coverage that UKIDSS will provide in the coming years and open new prospects to characterise this type of objects with the availability of the GTC", points out the scientist.

According to the researchers, the existence of stars like ULAS1350 in the solar neighbourhood is "exotic and extremely rare". This discovery required the inspection of hundreds of millions of sources in various astronomical data bases. This study was made possible thanks to the Virtual Observatory, an international initiative coordinated within Spain by the Centro de Astrobiologia, whose main objective is offer efficient access and analysis to large volumes of astronomical datasets.

The team who made this discovery is composed of Nicolas Lodieu from the Astrofisica de Canarias (Tenerife, Spain) and María Rosa Zapatero Osorio, Eduardo Martín, Enrique Solano, and Miriam Aberasturi from the Centro de Astrobiología (CSIC-INTA; Madrid, Spain).