LST1: a new telescope that shines in the summit of La Palma

Around 200 people from the 10 countries which had collaborated in the construction of thte first LST telescope (Germany, Brazil, Croatia, Spain, France, India, Italy, Japan, Poland, and Sweden) this morning attended the inauguration of what is planned to be the first element of the largest high energy observatory in the northern hemisphere. The Cherenkov Telescope Array (CTA) will have one site in la Palma and the other in Chile (CTA-south). From these two sites it will observe the full celestial sphere, and will obtain information about the gamma ray universo, and help to penétrate the mystery of dark matter, among its objectives.

Important figures in international physics and politics were present. The ceremony was openedby the Director of the Instituto de Astrofísica de Canaris (IAC) Rafael Rebolo, who reminded us that the IAC is “firmly resolved to serve scientific advance, offering its Teide and Roque de los Muchachos Observatories, recognized to be among the best int the world, so that the scientific community can install the most advanced instruments for the exploration and study of the universe” He also stressed the importance of international scientific cooperation to carry out projects that a single country cannot do alone- “This spirit of collaboration which we experience day by day in our Observatories is essential to give an impulse to science, and to bring it closer to our society, to get to know each other in many ways, not only cientifically, and to contribute to the progress of humanity.

Next spoke Federico Ferrini Director General of the CTA Observatory, who underlined the scientific potential of the CTA array of telescopes, offering a fundamental basis for astroparticle science during many decades. “Personally I have been fascinated for many years” he said “ By multimessenger studies which gamma rays, gravitational waves and neutrino detectors can achieve simultaneously in the exploration of extreme environments, suchas the collapse of neutron star binaries. These joint observations will reveal the most energetic secrets of the universe”.

In the inauguration ceremony the Director of the Max Planck Institute for Physics Masahiro Teshima praised the contributions of the 200 young scientists and engineers who had really built this telescope. “Without these well motivated young people we would not have achieved it”, and added “This telescope is not just big,. It also incorporates front-line technology in optics, electronics, photodetectors and calibration techniques, in order to maximize the production of the telescopes and to gain more sensitivity that the current generation of telescopes”.

Takaaki Kajita, Director of the Institute for Cosmic Ray Research (ICRR) of the University of Tokyo and Nobel Laureate in Physics in 2015 said that he was “very happy that many Japanese researchers, engineers and students have played an important role in this broad international scientific collaboration and are working on the construction of the large size LST telescopes”. He also stated that during recent years the development of multimessenger astronomy had received an impulse, and that “The CTA will undoubtedly become one of the key players, together with observatories of neutrinos, gravitational waves and cosmic rays, in the discovery of the mysteries of the universo. “As you probably know, “ he pointed out “LIGO and VIRGO have successfully detected gravitational waves. We hope that soon we will detect gravitational waves and gamma rays from the same source”.Kajita who was also present in the stone-laying of the telescope in 2015, added that he hope to be in La Palma again to see the completed array of telescopes in the CTA north.

Along the same lines, the Vice-president of the University of Tokyo, Masashi Haneda commented “I am impressed that the cooperation between Spain and Japan in a scientific project on such a large scale can help to solve the mysteries of black holes, the evolution of the universo, and important questions about dark matter”.

In addition the consul general of Japan in the Canaries, Takeshi Nakajima stated that for him “It is a great honour to represent the Government of Japan at this inauguration, especially as this year in which we celebrate the 150th anniversary of the relations between Japan and Spain. He went on to say “As a Japanese I feel great pride in the work carried out by more than 100 Japanese researchers at the University fo Tokyo who have contributed to developing research at a world-leading level. I trust that this project will help encourage future cooperation between Japan and Spain via the joint work between different institutes and research centres.

The President of the Cabildo of La Palma, Anselmo Pestana reminded us of the words of the Nobel Laureate in Literature Mario Vargas Llosa after his visit to the Roque de los Muchachos Observatory, “I think that in the few days I spent here I have learned more than in any other journey in my life”. He pointed out that this Observatory is a place of unity and collaboration between countries and continents, which houses one of the most complete ranges of telescopes in the world. “I have no doubt that we are talking about a place which is essential for the scientists who visit us every year, working with the telescopes in search of precise data for their research, as well as to widen their field of study and open new paths with help us to understand the key questions about the universo. This is long term work wjhich has given rise to many achievements and discoveries with world-wide recognition.

“The present and the future of La Palma are linked to the present and the future of the Observatory” stated Nieves Lady Barreto, counsellor for Territorial Policy of the Canary Government.. “The growth of La Palma as the island we dream of depends to a large extent on the gowrth of this space, a privileged precinct in Europe for astronomical Science and Research.We would like to be a perfect partnership between privileged nature and advanced technology, a place where the natural resources, the earth the sea and the sky are our best heritage and the source of a better quality of life and an opportunity of the future for the men and women of La Palma, but also for those who want to come here and research from all parts of the world, and maybe put down roots”. She added that “Just today, October 10th, marks the end of World Space Week, an event picked out by the United Nations for international celebrations every year of the contribution of space science and technology to the improvement of the human condition. This year its motto is “Space related to the world’s peoples”. Here and now, at this very momento, at the Roque de los Muchachos Observatory, in front over representatives of countries which are so diverse but which have united in a project whose aim is to enhance human knowlede beyond its limits, this motto has complete and very real meaning”.

The Minister of Science, Innovation, and Universities, Pedro Duque completed the speeches insisting on the benefit which the Observatories give to the Canaries, and in general to all Spaniards, as well as the important role of the Law of the Sky in limiting light pollution to the lowest possible levels. “This was an initiative of enormous value” he said, “because not only has it allowed us to have all of these installations in Spain, but it has also allowed us to develop the science of astrophysics in the universities, and even a science industry, which are important goals for us, and Spain has learned to make installations and equipment of the highest precision. All of this we have done by making wise use of nature, as given by the sky of the Canaries” And he added that “As a layman I am impressed that Professor Kajita is present here. We can be sure that in physics the very small and the very large are always united. He studies the tiniest neutrinos using telescopes which measure the largest galaxies, the most massive phenomena, and the first seconds of the universo. This overview of the smallest and biggest scienceis what we must bear in mind here. I think that in Spain we have a very high level in astrophysics and in many other areas of science. We should congratulate ourselves for this”.

This inaugural act, moderated by the Manager of the Observatory Juan Carlos Pérez Arencíbia, ended with the ceremony of cutting the multiple ribbon, following a Japaniese ritual, preceded by the words of Manuel Martínez, the CTA coordinator in Spain, and president of the management committe of the LST who expressed his satisfaction as seeing “the collective dream of a team of people” fulfilled with this telescope. Those invited could then take a close look at the telescope. 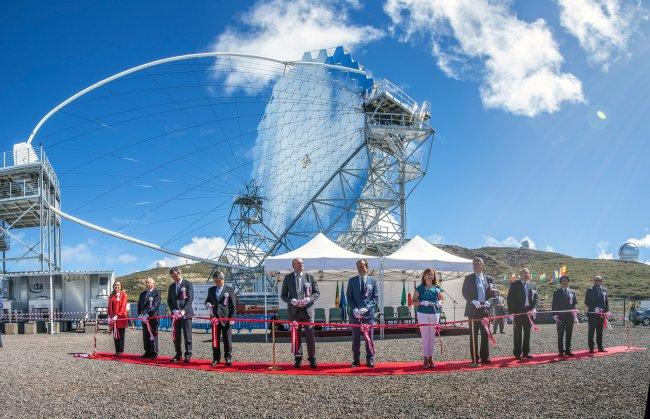