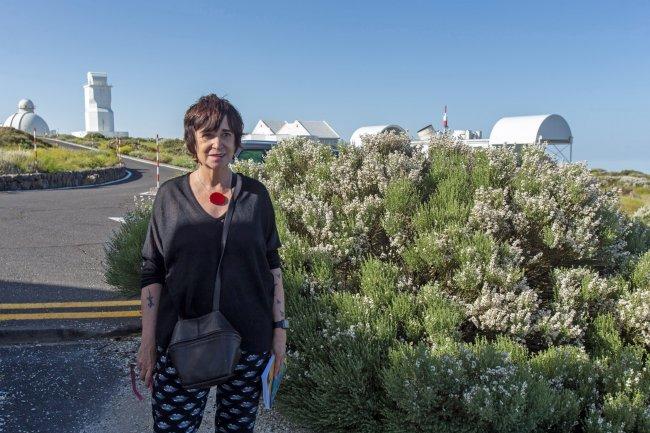 "This journey is a present and a privilege for me. I have always liked Astronomy, since I was a little girl I remember hanging on to my mother's hand one night in a street in Madrid filled with people looking up at the sky, watching a little star which was speeding across the dark sky. That star was Sputnik, the first Russian satellite. That night I decided that when I grew up I would be an astronaut, which obviously never happened. But, since then, I have always been fascinated by the sky, and have had a love of science, even though I studied humanities. For that reason, this initiative of the IAC to unite science and the humanities is marvellous for me".

With these words Rosa Montero showed her satisfaction for having been able to visit the Canary Island Observatories as part of the multidisciplinary project "En un lugar del Universo…". The author of books such as La hija del Canibal and La loca de la casa has, in the past few days, participated in this project which, by uniting literature and astronomy, has been celebrating the 4th centenary of the death of Miguel de Cervantes. The project invites well known writers in the Spanish language to celebrate their vision of astronomy in a book of short stories whose aim is to produce funds to support research in Alzheimer’s disease. The project "Enun lugar del Universo..." was initiated by the writer Elsa López,  and the writers Juan Cruz and Antonio Tabares will be the next to join in, followed by a number of others at later dates.

The International Institutions which participate in the Canary Island Observatories are participating in the project, as are the Museum of Science and the Cosmos, (Museums of Tenerife), and the Cervantes Institute, as well as the Severo Ochoa Programme which is helping to fund it.

During her stay in the Canaries, Rosa Montero could get to know at close quarters the scientific research which is being carried out at the IAC and in the Canary Observatories. She paid her first visit to the Teide Observatory, at Izaña (Tenerife), where she was shown around some of the telescopes, among them the Solar Laboratory the QUIJOTE  Experiment, the Optical Ground Station (OGS) and the IAC-80 telescope. She also made an observation of the sun with an Halpha telescope and could enjoy observing the night sky.

At the Roque de los Muchachos Observatory, in Garafía (La Palma), she visited some of the telescopes including those of the Isaac Newton Group of Telescopes: the William Herschel Telescope (WHT) and the Isaac Newton Telescope (INT), as well as the Italian National Galileo Telescope (TNG), the Swedish Solar Telescope (SST) the two MAGIC Telescopes and, of course, the Gran Telescopio CANARIAS (GTC) the largest optical-infrared telescope in the world.

She also thoroughly enjoyed the sunset and the starry night on the island, and made a guided night-time observation in the open air. She also visited the Real Sociedad Cosmológica of Santa Cruz de La Palma, in an event organized by the Cabildo of La Palma.

She finished her visit to the IAC with some final conversations with astrophyisists and engineers at the IAC Headquarters in La Laguna, with a guided tour of the workshops in the Instrument Division where she learned about the technological projects of the Institute.

Rosa Montero also visited the Museum of Science and the Cosmos (Museums of Tenerife), where she could enjoy the interactive educational modules, and where she made her final statements to the media about the "En un lugar del Universo..." project.

According to Rosa Montero, "bringing Science and the Humanities together is a most brilliant idea to try to educate society, and betting on science is a powerful way to obtain a better future". She made the criticism that our country "has a painful tradition of not supporting science, and that even a great thinker such as Unamuno managed to make the notorious statement “let the others invent…", in which he placed higher value on our mysticism than on the technology of foreginers. She added that, "as shown in a study by the BBVA foundation in 2012, 46% of Spaniards could not name a single scientist of any nationality or epoch; they did not even manage to name Einstien, who has the status of a rock-star. So this project by the IAC seems to me to be most opportune, and magnificent, although this is not really a surprise because the IAC is one of the most important centres of science in Spain".

The writer finished her visit by saying: "What a privilege, let me insist, to have been allowed to come here and visit the magnificent observatories of Teide and the Roque, to talk to scientists who are among the best in Europe, and to have had a peep at the huge beauty of the universe! I think that everybody should be obliged to visit the IAC at least once in their lives. Looking up at the sky makes us more human, more civilized, and less mean".