The splendour of the Seven Sisters

Image 1: Photo centered on the Pleiades star cluster in the constellation of Taurus, obtained with the Teide Astrograph of UC3 from the Teide Observatory (Izaña, Tenerife) which covers a wide field on the sky, equivalent to one hundred diameters of the mo
Advertised on
21/09/2017

“It happened that we were going by a place where there were seven kids, and by God and my soul, just as in my childhood I lived in a land of goats, so when I saw them I had an urge to play with them for a while, and if I didn’t do that I thought I would burst” Chapter XLI of the Second Part of Don Quijote de La Mancha in which Sancho describes the Pleiades during his imaginary journey to the sky with Don Quijote mounted on Clavileño.

These clusters are important to help us understand the universe, because the stars in a cluster have the same chemical composition the same age, and are closely grouped in position, so they are exceptional “laboratories” to test theories of stellar evolution, to determine distances in the universe, and to define many other physical parameters as precisely as possible.

The stars are spheroids of matter in equilibrium between two opposing forces: gravity (which tends to make them contract) and the energy of nuclear fusion (which tries to make them expand). During their lives the stars fuse light atoms (above all hydrogen) into heavier atoms (helium, carbon, nitrogen, oxygen) producing a large quantity of energy, at high temperature, which makes them shine. But the more massive stars burn up their fuel much more rapidly than the smaller stars, so they die more quickly. Using this principle, by finding the most massive star which still survives in a cluster we can estimate its age.

The Pleiades is one of the nearest star clusters, and one of the most easy to identify in the sky, situated in the constellation of Taurus, the Bull. It is also known as “the seven kids” or the Seven Sisters (M45) because in Greek mythology they are the seven daughters of Atlas and Pleione, converted by Zeus into doves and then into stars to escape the constant assault of Orion.

Although this clusters contains more than a thousand stars of all sizes, we can only pick out between seven and nine stars with the naked eye, depending on the visual acuity of the observer and the light pollution in the sky. The Pleiades are some eight times more massive than the Sun, and the brightness of each one is round a thousand times greater than that of our star. However using telescopes we can observe much fainter stars in the cluster because it is quite near (some 440 light years away), and including objects at the limit between a very small star and a giant planet. In 1995 the existence of this kind of object, a “brown dwarf” was verified for the first time from the Teide Observatory (Izaña, Tenerife) in the Pleiades, and was named Teide-1 in honor of the site from which it was discovered. Today we think that some 25% of stellar-like objects have these characteristics, even though they make up only 2% of the mass of all the stars. 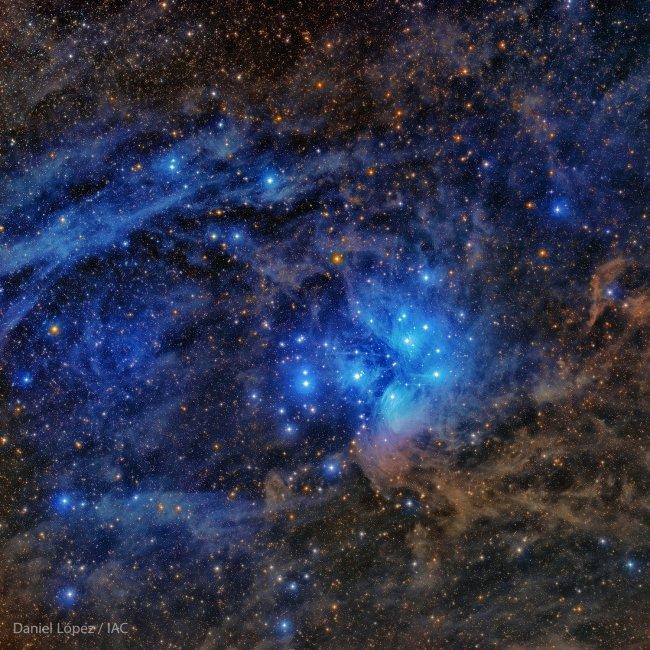