A Stellar Marriage Doomed to End in a Catastrophic Divorce 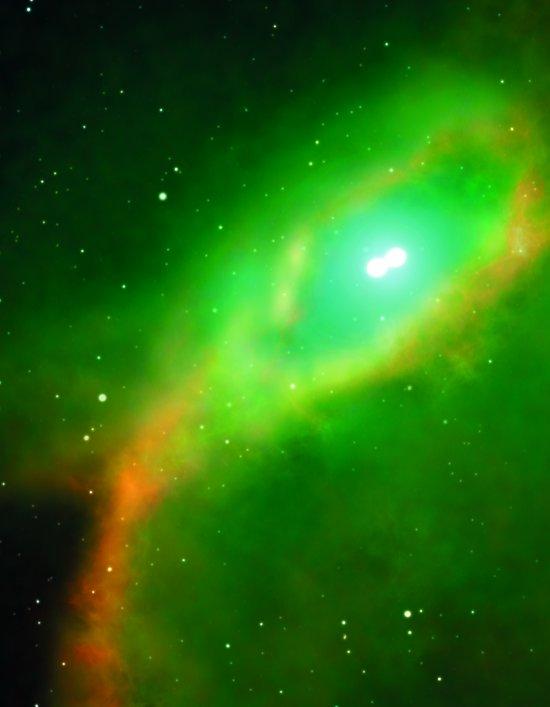 A team of astronomers, led by Spanish researchers including several based at the Instituto de Astrofisica de Canarias (IAC) and the Universidad de La Laguna (ULL), discovered that the star at the centre of the planetary nebula Henize 2-428 is not a single star but is, in fact, two white dwarfs which, having shed their outer layers to form the cloud of gas which surrounds them, will eventually merge in a stellar marriage doomed to end in a catastrophic divorce.  Within 700 million years, these inert stars, each about as massive as our own Sun, will collide and explode as a supernova.  This discovery confirms that supernovae type Ia might form from the merger of two dying stars, a possibility which, until now, was considered only in theoretical models. These supernovae, besides being one of the most energetic types of explosive events, act as "distance indicators", and have been a cornerstone in the discovery of the accelerating expansion of the Universe.

Stars like our own Sun, or a few times more massive, end their lives as planetary nebulae, throwing off their outer layers into space and forming a spectacular shell of gas, a planetary nebula, which glows by the light of the exposed, inert core. This core, known as a white dwarf, is no longer undergoing nuclear fusion, meaning that the only thing preventing it from collapsing under its enormous gravity is the degeneracy pressure of its own electrons, which are now ripped from the atoms that constitute the star.

It was, however, the beautiful nebula, roughly one light-year in size and with a pair of extended lobes taking the form of an hour-glass, which first drew the attention of the astronomers.

"We wanted to answer the, still unresolved, question of how a bipolar nebula can form from an essentially spherical star" says Miguel Santander of the Observatorio Astronómico Nacional (OAN)/Instituto de Ciencia de Materiales de Madrid (CSIC) and first author of the study. According to the most widely believed hypothesis, the presence of a second star can provide enough angular momentum for the outer envelope of the star to be ejected along preferred directions, giving the resulting nebula a highly symmetric appearance. The study of the periodic variation in brightness of the core of Henize 2-428 confirmed this hypothesis, revealing that the core was indeed two stars circling one another at high speed such that they complete one full orbit in just a little over 4 hours.

The observed variations in brightness had a further surprise to reveal. "The form of the light-curve suggested that both stars (not just one, as is the norm in these cases) were distorted by the gravitational pull of their companions" states Pablo Rodríguez Gil, researcher at IAC/ULL and second author of the study. Moreover, the spectra "indicated that the two stars were like twins, practically identical".

The next step was to measure the orbital velocities of both stars. A large telescope such as the Gran Telescopio CANARIAS (GTC), of the Observatorio del Roque de Los Muchachos on La Palma, was needed in order to make such precise measurements of these faint stars.

"The data from the GTC, along with the lightcurve, allowed us to determine the masses of both stars and their separation. This was when the biggest surprise was revealed", tells Romano Corradi, another of the study's authors and researcher at IAC/ULL. “Each of the stars has a mass more or less the same as that of the Sun, and they are sufficiently close to one another that, according to the Theory of General Relativity, they will grow closer and closer, spiralling in due to the emission of gravitational waves, before eventually merging into a single star in within the next 700 million years. The resulting star will be so massive that even the degeneracy pressure of its electrons won't be enough to prevent it from collapsing in on itself, and subsequently exploding as a supernova”. "Until now, the formation of type Ia supernovae by the merging of two white dwarfs was purely theoretical" explains David Jones, coauthor of the article and also researcher at IAC/ULL.

"It's an extremely enigmatic system", concludes Santander, "which will have important repercussions for the study of type Ia supernovae, widely used to measure astronomical distances and the key to the discovery that the expansion of the Universe is accelerating due to dark energy".

In addition to the spectra obtained with the OSIRIS instrument on the GTC, observations with the William Herschel Telescope (WHT, 4.2 m), the Isaac Newton Telescope (INT, 2.5 m) and Mercator (1.2 m), all installed in the Observatorio del Roque de los Muchachos, in La Palma, have also been important for this study; as well as observations with the VLT (8.2 m, Chile) and the South African Astronomical Observatory (SAAO, 1 m, in South Africa).