Takaaki Kajita, Nobel Laureate in Physics 2015 participated in the stone-laying ceremony for the prototype telescope of the LST 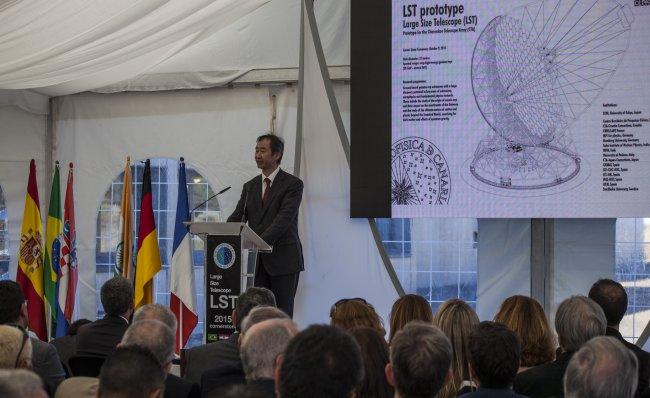 Takaaki Kajita, Director of the Institute for Cosmic Ray Research (ICRR Tokio), during his speech at the ceremony of the stone-laying for the prototype LST.Credits: Antonio González/IAC
Advertised on
10/10/2015

The ceremony took place at the Observatorio Roque de los Muchachos (ORM) on the island of La Palma. During the presentation Fernando Clavijo, President of the Canary Autonomous Regional Government, unveiled a commemorative plaque showing the design and main characteristics of the telescope. During the ceremony there were speeches by Rafael Rebolo, Director of the Instituto de Astrofísica de Canarias (IAC), Takaaki Kajita, Director of the Institute for Cosmic Ray Research (ICRR, Tokyo), Martín Taño, the Mayor of Garafia, Anselmo Pestana, President of the Cabildo of La Palma, Carmen Vela, Secretary of State for Research, Development and Innovation, and Kazuhiko Koshikawa, the Ambassador of Japan.

Takaaki Kajita, Nobel Laureate in Physics, 2015, stated the CTA (Cherenkov Telescope Array) "will be a really key scientific project in the field of high energy and cosmic ray astrophysics, and it must be completed with a common effort"

The prototype LST will be the first telescope of the CTA network when the agreement between Spain and the CTA consortium for the installation of the CTA-North at the Observatorio Roque de los Muchachos (La Palma) is completed.

Please, use the logo of the IAC.