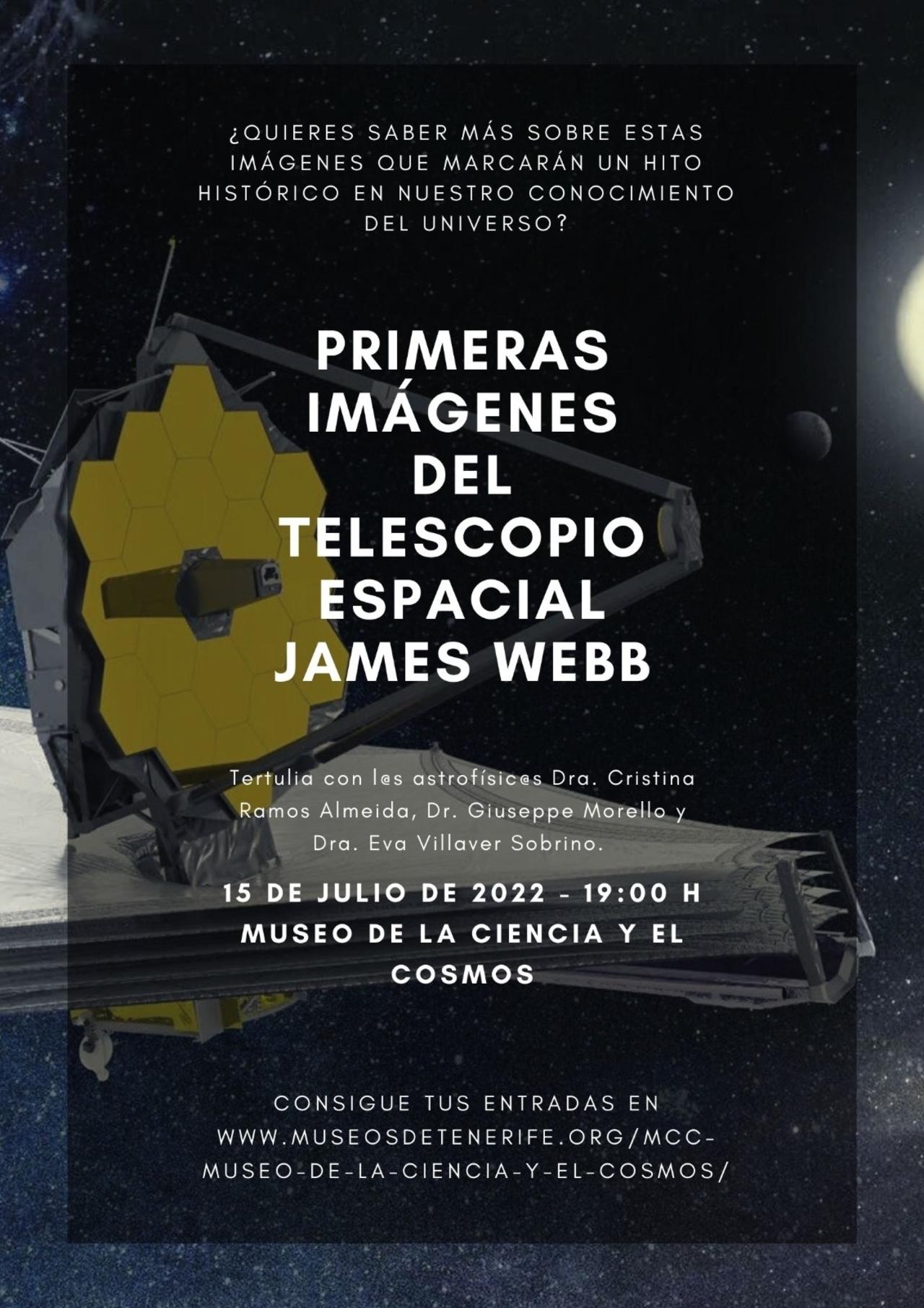 On Friday July 15th at 19.00 h, in the hall of the Museum of Science and the Cosmos (MCC) of Tenerife, there will be a presentation of the first set of full colour images obtained with the largest and most complex observatory ever flown in space, the James Webb Space Telescope (JWST).

The James Webb Space Telescope is a collaboration between NASA, the European Space Agency (ESA), and the Canadian Space Agency (CSA). It was launched into space on 25th December 2021 and since then has moved to its position at a “Lagrane Pint” one and half million kilometres from the Earth. Now, after some months of adjustments and tests it is ready to offer the world its first full colour images.

The first set of images and data will be published next Tuesday, July 12th in a direct broadcast followed by a session of information from NASA’s Goddard Space Flight Center. All the images will also be published at the same time on social media, as well as on the websites of the three space agencies.

The first images of the JWST will pick out the scientific themes which inspired the mssion and which will be central to its work, the early universe, the evolution of galaxies with time, the life ciclos of the stars, and other worlds. These observations not only mark the beginning of the general scientific operation of the telescope, but the beginning of an incredibly exciting period of discovery about our Universse.

To help celebrate this important launch, ESA/Webb invited organizations, institutions and groups throughout Europe to present proposals in order to maximize the reach and the impact of these images with special events in their communities

The Instituto de Astrofísica de Canarias (IAC) together with the MCC of Museos de Tenerife are two of the Spanish institutions which have joined this collaboration, organizing a public act in which research staff at the IAC will present each of the images of the JWST related to his or her field.

The even will take place on Friday July 15th in the main hall of the MCC, and will have the format of a discussion moderated by the astrophysicist and director of the Museum, Hector Socas Navarro. The discussion has been organized by the outreach astrophysicist of the Unit of Communication and Scientific Culture of the IAC, Irene Puerto, and the following speakers will take part:

- Cristina Ramos Almeida, an IAC researcher, coordinator of the research line “Formation and Evolution of the Galaxies”. She is a participant in the international collaboration Galactic Activity, Torus and Outflow Survey (GATOS) which has observation time on the JWST.

- Giuseppe Morello, an IAC researcher, expert in exoplanets, who is a particpant in the international collaboration The Transiting Exoplanet Community Early Release Science Program  with observation time on the JWST.

- Eva Villaver Sobrino, university professor and an IAC researcher, expert in the life cycles of the stars an in astrobiology. She has worked for NASA at the Space Telescope Science Institute (STScI) which is in charge of the scientific operations of the JWST as well as of the Hubble

NASA archive for the first images of the JWST

List of the events to be seen in Europe

The Webb Telescope, the next flagship astrophisical mission from NASA, ESA and the CSA, will be launch on December 18th 2021. With a 6.5 m primary mirror, it harbors 4 state-of-the-art instruments with powerful spectroscopic, imaging and coronagraphic capabilities. During Cycle 1 more than 10000 hours of observing time have been allocated to 400