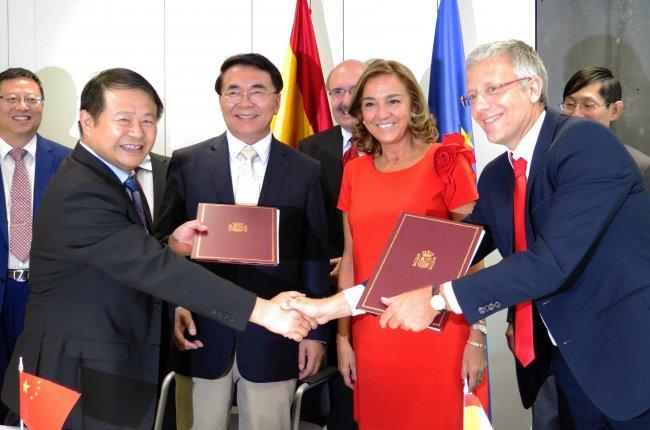 Romano Corradi, and the Director General of the National Astronomical Observatories of China (NAOC), Jun Yan, during the sign of the agreement for scientific and technological collaboration at the Office of the Secretary of State for R+D+I in Madrid. The
Advertised on
05/09/2016

Today, Monday 5th September, the Director of the Gran Telescopio CANARIAS (GTC), Romano Corradi, and the Director General of the National Astronomical Observatories of China (NAOC), Jun Yan, signed an agreement for scientific and technological collaboration at the Office of the Secretary of State for R+D+I in Madrid. The signing was presided over by Carmen Vela, Secretary of State for R+D+I, and the President of the Chinese Academy of Sciences (CAS), Bai Chunli.

The objective of the agreement between the GTC and the NAOC, promoted by the Instituto de Astrofísica de Canarias (IAC) is to strengthen the collaboration between the two institutions, and includes the provision by the NAOC of an advanced instrument for the GTC, and the possible access to 5% of observing time on the telescope. This could lead to the NAOC becoming a full member of the international user community of the GTC.

As well as the above mentioned agreement, the IAC and the NAOC are also collaborating in the SONG Stellar Observations Network Group, network, which at the present time comprised a Danish telescope -the Hertzsprung SONG telescope- at the Teide Observatory, Izaña, (Tenerife) and a similar Chinese telescope at the Delingha Observatory, Qinghai (China).  These two 1m telescopes are making observations of stellar oscillations and of other variable objects. In addition, the NAOC is one of the collaborating institutions in the future giant TMT (Thirty Meter Telescope) which could eventually be installed on La Palma if the proposal to install it on Hawaii cannot go forward.

On the days before today's agreement, a delegation from the NAOC and Bai Chunli visited the IAC headquarters. During the Saturday visit and meeting at the IAC, was also present the President of the Government of the Canaries, Fernando Clavijo, accompanied by the Presidentof the Cabildo of Tenerife, Carlos Alonso. The next day, the Chinese delegation visited the Roque de los Muchachos Observatory, in Garafía (La Palma), to get to know the telescopes there, and to meet with the President of the Cabildo of La Palma, Anselmo Pestana.

This visit is occurring after a visit made by the Director of the IAC, Rafael Rebolo, and the director of the GTC, Romano Corradi, to the NAOC in May, where the IAC signed a memorandum of scientific and technical collaboration to promote the joint development of instrumentation.

The Chinese Academy of Sciences, with its Headquarters in Beijing, comprises 124 entities, including research institutes, universities and other related centres, which employ more than 70,000 researchers who are developing more than 30,000 research projects in natural and applied science. One of its institutions is the National Astronomical Observatories of China, which was founded in 2001 by the merging of four observatories, three observing stations, and one research centre. The NAOC carries out frontier studies in astronomy, operates the main national observing facilities, and develops key new technologies.