A team of astronomers of the CARMENES consortium, with participants form the Institutode Astrofísica de Canarias, has discovered a planetary system aroiund the red dwarf star GJ 3512, at some 30 light years from Earth, with an unusual gas giant planet whose excentric orbit could imply the presence of another massive planets. In the study the 40 cm telescope of the Las Cumbres Observatory (LCO) at the Teide Observatory, was used. This discovery is published today in the journal Science.

A study by the CARMENES consortium, headed by the Institue of Space Studies of Catalonia (IEEC) in the Space Sciences Institute (ICE, CSIC) and with participation by the Instituto de Astrofísica de Canarias (IAC) has discovered a gas giant planet orbiting the nearby red dwarf star GJ 3512, 30 light years away from the Earth.

With onlh 10% of the mass of the Sun, GJ 3512 is almost identical to Proxima Centauri, and is only a little more massive than the Teegarden star and to TRAPPIST-1 , which have terrestrial planets in temperate orbits, but no gas giants. The presence of this type of planets around a star with such a low mass does not agree with any of the current models of planet formation.

The researchers think that the planet probably formed from the división into several fragments of an unstable disc of material around the star when it was still young. This contrasts with the way in which it is though that the majority of giant planets have been formed, in which they grow slowly while the gas falls onto a solid nucleus.

To make this discovery the astronomers used the Doppler technique which measures the motion of toing and froing of a planet when it has one or more planets orbiting it. However GJ 3512 was on the point of not being on the list of objects to observe. “ Initially this star was not included in our observing list because it was too faint” explains Ignasi Ribas, a scientist on the CARMENES project, who is director of the IEEC, “ but we realized that we did not have enough small stars in the sample, and at the last mintue we added some. We were lucky to do this becasue otherwise we would not have made this discovery.

However this was not the only surprise. After some initial observations the star drew the attention of the scientific community which gave rise to further observations. “ The star very quickly showed quite strange behaviour. Its velocity changed very quickly, indicating the presence of a massive companion, which is not usual for a red dwarf” explains Juan Carlos Morales, a researcher at the IEEC/ICE who led the study. This giant planet might have been expelled from the system in the past, and is now a wandering body in galactic space.

A model to complete

After this discovery researchers from the IEEC, the Max Planck Institute for Astronomy (MPIA) and other institutes of the CARMENES consortium established a collaboration with the Lund Observatory (Sweden) and the University of Bern (Switzerland),world leadeers in the theory of planet formation, to study plausible scenarios for this system.

Until now the “nuclear accretion model” for the formation of planets was considered sufficient to explain Jupiter and Saturn in our solar system, and many other gas giant planets discovered around other stars. This model assumes that these planets form in two phases: first rocky nuclei are formed, of size a few Earth masses, within the protoplanetary disc, and then when they reach a critical mass they start to accumulate and retain large quantities of gas until they reach a size equal to or greater than that of Jupiter.

However low mass stars should have proportionally lighter discs, so that the quantity of matter available in the disc to form planets should also be much lower. “After performing multiple simulations to try to explain the system we conclude that our current models couild never explain the formtion of a single giant planet, and even less of two “ explains Alexander Mustill, the principal investigator of Lund Observatory.

A possible alternative scenario is the “model of disc instability which maintains that some or maybe all gas giant planets can be formed directly by accumulation due to the self-gravity of the gas and dust, instead of needing a nucleus to act as a “seed”. Although this new scentario is plausible it has been ignored until now because it does not explain some other trens observed in the population of gas giant planets. This new discovery by CARMENES is destined to change this situation.

“It intrigues me how a single anomalous observation is able to induce a change in the paradigm of our thinking, in something so essential as palent formation, and therefore in the general panorama of how our own solar system came into existence” stresses Morales.

The signal from the observed exoplanet was detected clearly in both arms, visible and infrared, of the planet hunting spectrograph CARMENES, on the 3.5m telescope of the Calar Alto Observatory (Almeria),. This instrument, which has been working since 2016, was built in collaboration with 11 research institutions in Spain and Germany. Its infrared arm was the main contribution of the Spanish institutes to the consortium. With this recent discovery, CARMENES has obtained the first detection of an exoplanet using only a new generation high resolution near infrared spectrograph.

“Despite the fact that optical high-resolution and stabilised spectrographs have existed for a while, near-infrared ones represent a new technology”, explains Ansgar Reiners of the Astrophysics Institute in Göttingen, Germany. "“As their name indicates, red dwarfs emit most of their light in the red and near infrared parts of the spectrum, so CARMENES has been essencial in this finding", the researcher notes.

In this discover the CARMENES consortium also used other telescopes, such as the Joan Oró (TJO) telescope of the IEEC at the Montsec Observatoryu, the installations of the Sierra Nevada Observatory (IAA, CSIC) abd the 40 cm telescopes of the Las Cumbres Observator (LCO) at the Teide Observatory (Tenerife). According to Lucía González Cuesta, a doctoral student at the IAC who has participated in this study, these latter telescopes “played a special role in the discovery, allowing us to determine the period of rotation of the star, and confirm that the signal is due to a planet and not to stellar activity”

The CARMENES consortium continues to monitor the star to try to confirm the existence of a second object, maybe an object similar to Neptune, with an orbital period which is longer. In addition the scientists have not ruled out the presence of terrestrial planets in temperate orbits arouind GJ 3512, so that it may be a small scale Solar System. 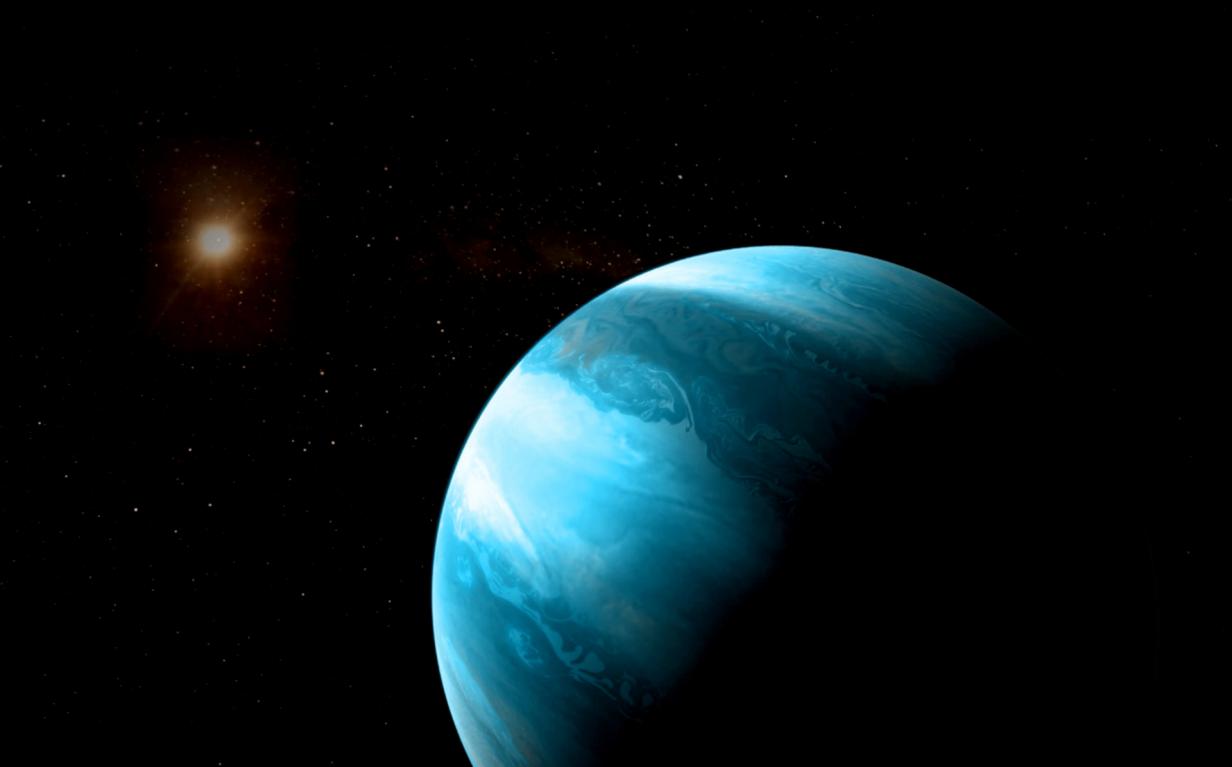