Battle of the Titans: Two Black Holes in ActionScience with the GTC 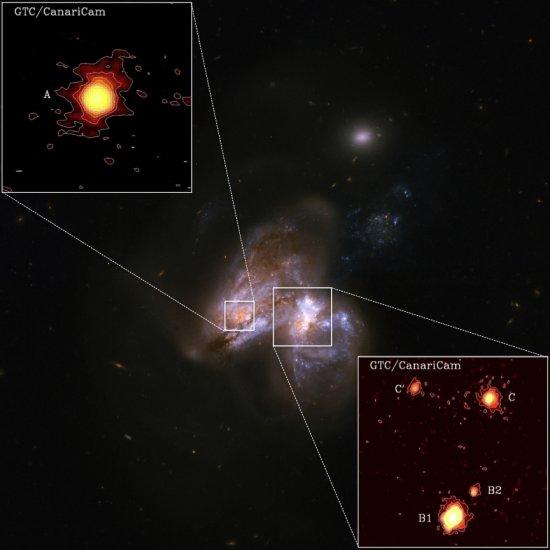 The background image is taken with the ACS instrument on the Hubble Space Telescope (HST) in the visible wavelength range combining two filters. It basically traces emission from young and evolved stars (blue) and regions of high dust content (red, in the
Advertised on
19/12/2013

Arp 299 is the name given to two galaxies (NGC3690 + IC694) in collision. This interacting system is at a relatively early stage in its chance encounter. Both galaxies have an active nucleus (called Active Galactic Nuclei – AGN) that host black holes in their interiors. Now, for the first time, it has been possible to isolate the mid-infrared emission from the two simultaneously emitting interacting nuclei.

But penetrating the heart of these dense regions is complicated since they are largely surrounded by a torus of gas and dust that block the emission from the black holes, quite apart from the gas and dust of the surrounding host galaxies. With instruments such as CanariCam and the large light-collecting capacity of the GTC we are able to delve into the inner parts of these dense regions to see what is happening beyond the torus.

The interaction currently taking place in Arp 299 began at least 750 million years ago, but the system has not yet become completely merged. It is a so-called Luminous Infrared Galaxy (LIRG) system, and the primary cause of its intense emission is the intense star formation activity taking place in the system; that is to say, in the nuclear regions, the spiral arms and also the collisional interface between the two galaxies.

‘Previous studies have indicated the presence of nuclear activity in both galaxies,’ explains Almudena Alonso Herrero, who is heading the study, ‘but with the high angular resolution of the spectroscopic data obtained with GTC/CanariCam, our observations have improved by a factor ten over previous mid-infrared observations of this system. Our data reveal the presence of activity at the heart of both nuclei.’

Mid-infrared emission from the nucleus of NGC 3690 (the westernmost galaxy of the pair) can be explained in terms of re-emission by the dust in the clumpy torus that has been heated by the AGN. For its part, the nuclear spectrum of IC 694 (the eastern component of the pair) shows bright polycyclic aromatic carbon (PAH) emission originating in an embedded region and indicating the presence of intense star formation activity in this region, as well as evidence of AGN-heated dust.

In conclusion, for the first time it has been possible, using spectroscopic data, to detect and differentiate mid-infrared emission from two interacting AGN in Arp 299 that emit simultaneously. According to predictions of theoretical models, activity from both AGN would occur simultaneously for only 10% of the duration of the interaction, especially during the separation of the two nuclei of Arp 299.

Scientific article: Uncovering the deeply embedded AGN activity in the nuclear regions of the interacting galaxy Arp299, by Alonso-Herrero et al. 2013; published in the journal ApJ Letters. This is the first article to be published using data from the CanariCam instrument.

The CanariCam observations used in this study are part of the Guaranteed Time Programme, led by Professor C. Telesco of the University of Florida (USA), who is also a coauthor of this article.