Ending of the course for teachers “Get close to the Cosmos”

For the fourth successive year the Instituto de Astrofísica de Canarias and the National Institute for Educational Technology and Teacher Training (INTEF), in collaboration with the International Menéndez Pelayo University (UIMP) has given teachers of secondary and pre-university education the opportunity to get to know the latest discoveries in astrophysics in a course given by professionals, thereby acquiring the tools for using them afterwards in the classroom.

Today saw the end of the fourth edition of the course “Get close to the Cosmos” for training  teachers of secondary and pre-university education in astrophysics, organized by the Instituto de Astrofísica de Canarias (IAC), the National Institute for Educational Technology and Teacher Training (INTEF) (which is the unit in the Ministry of Education and Professional Training responsible for the integration of science and technology in the various stages of education) and the International Menéndez Pelayo University (UIMP). The course involved five days of training whose aim was to bring 52 teachers up to date on the new discoveries in the field of astrophysics and to offer them the tools and the stimulus they will need in order to incorporate astronomy-related content into school curricula.

The course, which was held in Tenerife from 8th to 12th July, directed and coordinated by Rafael Rebolo, the Director of the IAC, Alfred Rosenberg, outreach astrophysicist at the IAC, and Alberto Martín, technical adviser to INTEF, had a total duration of 50 hours (50 in real time, 20 on line) and included several lectures per day from staff members of the IAC which covered a range of ares within astrophysics. In addition, as in previous years, the participants also visited the Museum of Science and the Cosmos, (of Museums of Tenerife), and the Teide Observatory.

The search for life in the universe

Before the closure of the course there was a panel discussion about “The Search for Life in the Universe”, chaired by the Director of the IAC, Rafael Rebolo, with the participation of the astrophysicists Patricia Chinchilla, José Alberto Rubiño Martín, and Antonio Eff-Darwich. The debate was focused on four aspects related to extra-solar planets: habitability, biomarkers, extremophiles, and the search for intelligent life. To define the conditions of habitability needed for a planet, the following were listed: the temperature, the presence of an atmosphere, a magnetic field, the size of the planet and the age of the star, as the main ítems. To summarize, a planet needs a solid surface, to be expected for planets of up to twice the radius of the Earth. As far as we know the number of planets in our galaxy should be at least equal to the number of stars, which would imply 10,000 million planets with a solid crust, and planets really like the Earth could number 1,000 million. However we still cannot estimate what fraction of these might have water, or an atmosphere.

To determine the frequency of Earth-like planets with an atmosphere and which are affected by biological activity, certain biomarkers have been identified, including the presence of water, oxygen, ozone, methane and carbon dioxide. It was also suggested that we might well need to refer to a “biopack” resulting from the combination of all of them. The next generation of telescopes is being designed to have greater detectivity of these markers.

The third point discussed was the different types of extremophiles, organisms which on Earth live in extreme conditions (very high or very low temperatures, extreme acidity of their surroundings, a poisonous environment, and very high intensity of radiation) such as lichens, bacteria, and tardigrades.

Finally the panel discussed the markers proposed to detect technological civilizations “technomarkers” which we would need in order to determine if there is intelligent life elsewhere in the universe. A number of hypotheses were presented, from the absence of any civilization more advanced than ours, because if they existed they would have contacted us by now, so we are alone in the universe, which is known as the Fermi paradox. And the panel considered how long it would take a more advanced civilization to explore our Galaxy. This could be a million years, which is comparable to the current age of the human species.

(Link to the programme: http://www.uimp.es/images/pdf/Portada/Programa_General_Web_2019.pdf) 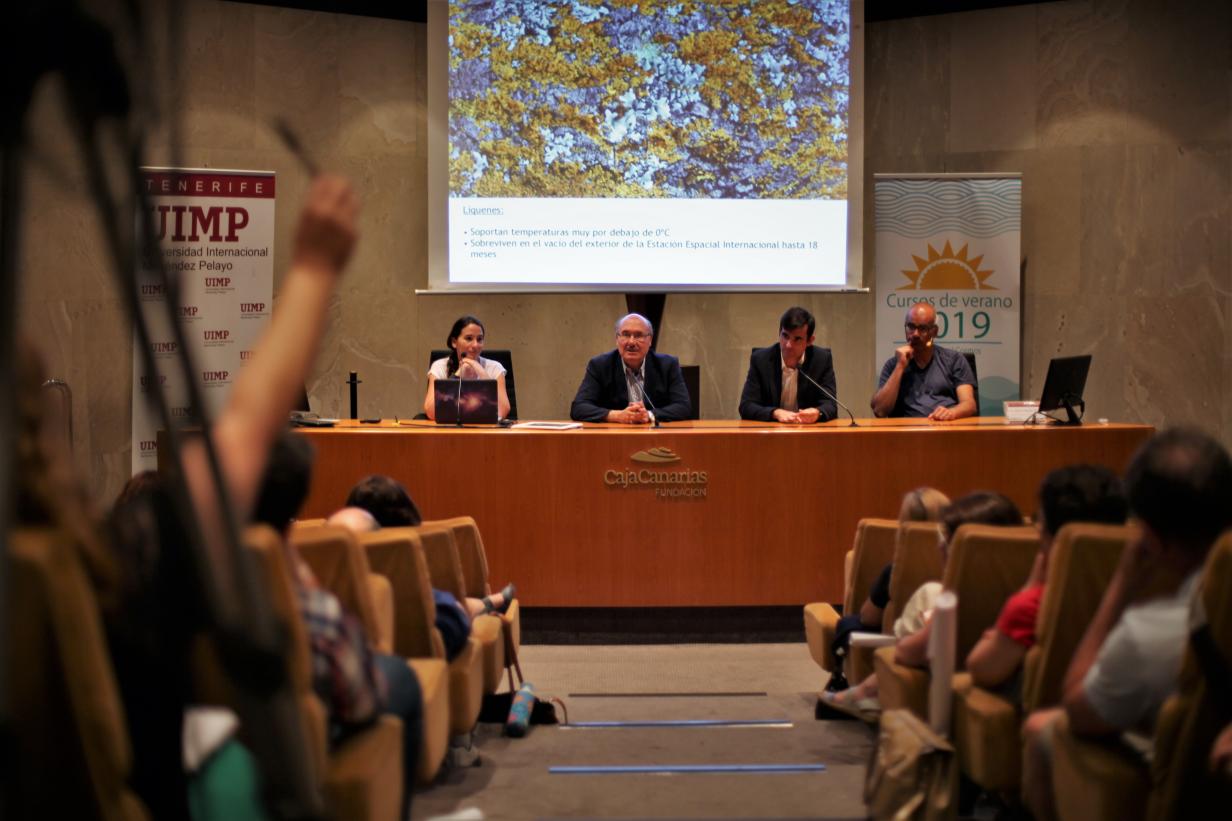