The European Research Council has awarded one of its prestigious “ERC Advanced Grants” to Javier Trujillo Bueno, CSIC Research Professor at the IAC 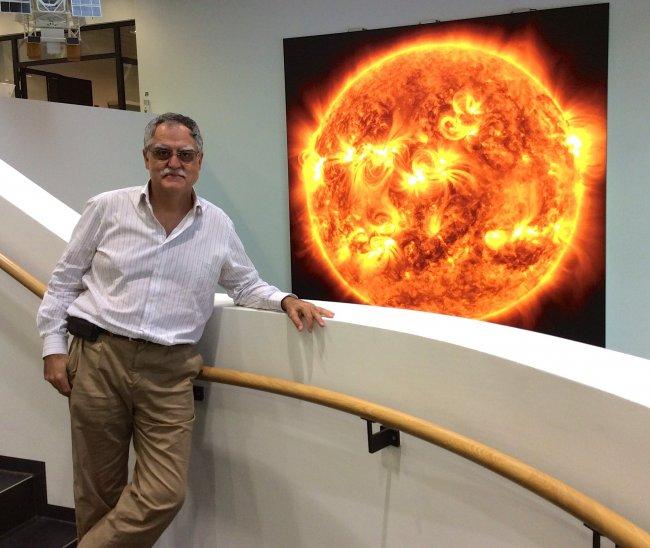 Javier Trujillo Bueno during an international congress at the Max Planck Institute for Solar Physics, in Gottingen (Germany).
Advertised on
27/03/2017

The scientific research carried out at the Instituto de Astrofísica de Canarias (IAC) have again achieved the recognition of the European Research Council (ERC).This organization has just made an ERC Advanced Grant, in a programme to fund the development of excellent and highly innovative projects, to the CSIC Research Professor at the IAC Javier Trujillo Bueno. The project, titled "Polarized Radiation Diagnostics for Exploring the Magnetism of the Outer Solar Atmosphere" (POLMAG), is aimed at the development of new methods for investigating the magnetism in the outer layers of the solar atmosphere (chromosphere and corona) based on the measurement and the theoretical interpretation of the polarization of the radiation in the solar spectrum. The results may open a new window of astrophysical research with important implications for our understanding of the Sun and its magnetic activity.

POLMAG will start in 2018 and will have a duration of 5 years. From the IAC Javier Trujillo will coordinate a research team which will have the full support of the Office for the Publication of Research Results (OTRI) and of the Research Division.

Javier Trujillo Bueno has a doctorate in Physics from the University of Göttingen (Germany) and is a Research Professor of the Spanish Higher Council for Scientific Research (CSIC), destined to the IAC. He has extensive experience in the field of solar physics, and specifically in solar and stellar magnetism, theoretical and observational spectropolarimetry, the quantum theory of light polarization, radiative transfer in magnetized plasmas, and numerical simulations. For the last 20 years he has been a pioneer in the development of studies of the magnetized solar plasma, and since 2011 is one of the Principal Investigators of CLASP (Chromospheric LAyer SpectroPolarimeter), a  series of space experiments using NASA sub-orbital rockets, based on the theoretical studies of Professor Trujillo and his international group. These, and other achievements, have served to make him the first Spanish scientist to obtain an ERC Advanced Grant in the field of “Science of the Universe”.

Winning this Advanced Grand is a new success for the Solar Physics group at the IAC, which is also the driving force behind the project to build the “European Solar Telescope” (EST), one of the European strategic scientific installations, which should be built at the Canary Island Observatories.

“The recognition given by the European Research Council to the work of Prof. Trujillo” stated Rafael Rebolo, the Director of the IAC “is one more indicator of the high research quality and excellence of the Solar Physics Group at the Institute, as well as a guarantee of the success of the future European Solar Telescope, whose construction we expect to receive the firm support of the Canary Government, and of the Government of Spain.

Among the support programmes with which the European Union can promote scientific initiatives with international impact, the ERC Advanced Grants are those which receive the greatest degree of economic support, as they are projects from all areas of science which are on the frontiers of knowledge. With these programmes it is expected that the research which is funded opens the way to scientific and technological results and new areas of research which, in the last analysis, can generate new ideas which give an impulse to innovation and invention in companies and tackle social challenges.