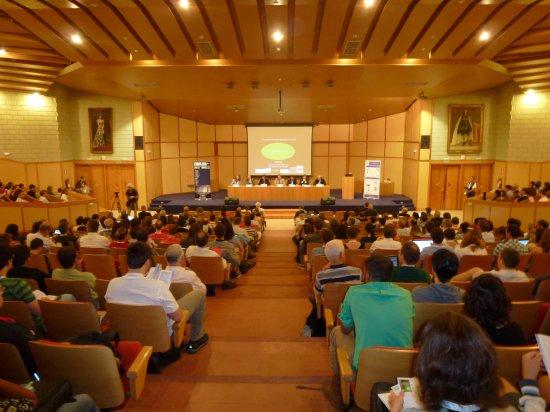 The keynote speech, by LIcia Verde, was dedicated to the 50th anniversary of the discovery of the cosmic microwave background

EWASS 2015 (European Week of Astronomy and Space Science), the biggest annual astronomical congress at European level, was inaugurated this morning. This year's meeting is being held at the Guajara Campus of the University of La Laguna (ULL) in Tenerife and will run until Friday (26 June). EWASS 2015 is being coordinated locally by the Instituto de AstrofÃ­sica de Canarias (IAC) and organized by the European Astronomical Society (EAS) in collaboration with the Spanish Astronomical Society (SEA), the IAC and the ULL.

All highlighted the importance for Tenerife of hosting a congress at this level for the first time. The number of participants (1200) is practically double what was expected initially. Furthermore, EWASS 2015 coincides with the 30th anniversary of the inauguration of the Canary Islands Observatories, and the IAC's Director announced that King Felipe VI will preside over the inauguration ceremony next Saturday of the two telescopes that comprise the Quijote Experiment, along with another six robotic telescopes at the Teide Observatory (for more information, see www.iac.es).

The next step will be to explain the first instant of the Big Bang. According to Verde, it could be some years before we achieve this goal: 'The Golden Age of cosmic microwave background observations is now over,' she affirms. To progress further, there are several Earth-based projects, such as the Teide Observatory's Quijote Experiment in Tenerife, due to be inaugurated this Saturday. The definitive experiment, she says, will be a new satellite that is right now in the proposal phase. 'But we could be in for a surpise,' she cautions. Maybe one of the ground-based experiments will produce revolutionary findings in the coming months. That's the way science is!

All this research on the cosmic microwave background could also open up new fields of investigation. 'I think the coming era will be the golden age of large-scale structure, by which I mean the mapping of the distribution of galaxies, galaxy clusters and dark matter. The many tools and great rigour developed by the scientific community to undertake high-precision cosmology of the cosmic microwave background are now being turned towards the field of large-scale structure, and a huge observational effort is being made in this direction,' Verde adds.

More information is available in the interview published at www.iac.es.

Following Licia Verde's talk, Professor Ewine van Dishoek, who received the L. Woltjer Prize of the EAS, spoke on the astrochemistry of complex molecules in space.

EWASS 2015 consists of various plenary and 40 splinter meetings, in which the latest advances in various fields of astronomy and astrophysics will be discussed. The congress will also serve to strengthen ties among various bodies dedicated to astronomy in the European continent. There will also be opportunities to debate the continent's science policy in the area of astronomy.