First Light of a "Guide Star" 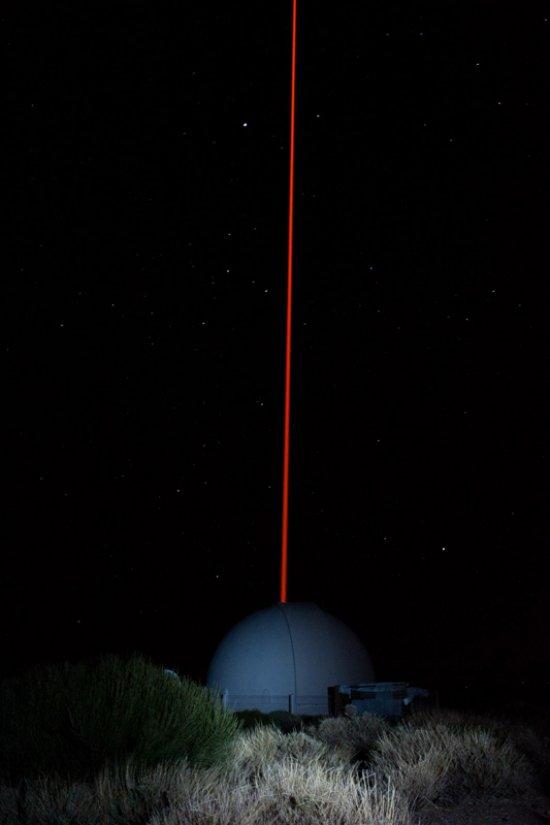 Laser Guide Star Systems are part of the technology used in the field of Adaptive Optics, a technique to compensate the atmospheric turbulence which affects ground-based observations, which will soon be put in place on the 10.4m Gran Telescopio Canarias (GTC) at the Roque de Los Muchachos Observatory on La Palma. A "Wendelstein Laser Guide Star Unit" developed by the European Southern Observatory (ESO), has just been installed and set working successfully at the Teide Observatory, thanks to an agreement signed in April 2014 between ESO and the Instituto de Astrofísica de Canarias (IAC), with the collaboration of the GTC, and the Astronomical Observatory of Rome, Istituto Nazionale di Astrofisica (INAF).

One of the worst enemies of astronomers is the Earth´s atmospheric turbulence, which makes celestial objects appear blurred when they are observed using terrestrial telescopes. To compensate for this effect, adaptive optics are used. In this technique computer controlled deformable mirrors are adjusted hundreds of times per second to correct in real time the distortion produced by the atmosphere.

Astronomers use bright stars close to the object under study to measure the effect of the turbulence, and use the measured signal to control the deformable mirror. Unfortunately the number of stars of this type bright enough for the needs of adaptive optics is very low. This problem is solved by using artificial references, so-called “laser guide stars”.

These guide stars are formed by aiming a powerful laser beam at the sky. The beam gives rise to a bright point, because it excites the sodium atoms in the mesosphere, a layer of the atmosphere some 90 km above the ground. The light which is reflected from these artificial references can be used by the adaptive optics to measure the effect of atmospheric turbulence and correct it, yielding astronomical images virtually as sharp as if the telescope were in space.

The collaborative activities which are being carried out at the Teide Observatory are phases of research and technological development aimed at optimizing the intensity of the laser guide star generated in the mesosphere, paying special attention to the influence of the Earth’s magnetic field in stimulating the emission of the sodium atoms.

The experiment uses technologies developed by ESO to produce a fibre based laser emitting continuously with a power level of 20 watt and with the ability to vary parameters such as the frequency, the spectral line emitted, the line width, the polarization, and the brightness. The observing campaigns will start this month, and continue at a rate of one week per trimester for a period of 15 months.

This work is part of a wider programme of research and technological development in adaptive optics and laser guide stars being carried out by ESO in collaboration with other institutions and companies in Europe, in the context of a number of present and future projects, such as the European Extremely Large Telescope (E-ELT). These experiments are also a step towards the laser guide star system for the GTC and can be adapted to improve existing systems on other telescopes, such as the Large Binocular Telescope.