The GTC observes, for the first time, a main belt comet (MBC) splitted into four fragments 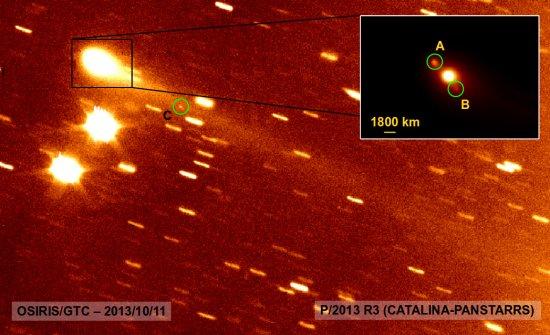 It’s not an asteroid because, like a comet, it has a tail . However, it's not a comet because its orbit could only be done by an asteroid. The scientific community has called this class of objects, of which only a dozen are known, as main belt comets (MBC). For the first time, a Spanish team of researchers has identified one of the bodies after being divided into at least four smaller fragments. The finding, observed through Gran Telescopio Canarias ( GTC), is a unique opportunity to study the internal structure of a MBC and discover the mechanism that makes it an asteroid with a tail , an  hybrid between an asteroid and a comet .

The work , led by the astrophysicist of the Instituto de Astrofísica de Canarias (IAC) , Jaiver Licandro , has also the participation of researchers assigned to the GTC and the Instituto de Astrofísica de Andalucía ( IAA ) . Licandro contextualizes the research: " One of the questions about the MBC is the mechanism by which they eject dust and form , such as comets , a comma and a tail. The asteroids, which until recently were considered to be composed of rock and metal, could not process of a tail like comets, at least not by the same mechanisms that they do. Comets, however , can because they are composed by ice”.

Licandro adds: “The MBC do not come from the same regions where the comets come from : the trans-Neptunian belt and the Oort cloud . These regions are populated by bodies composed by ices and silicates. These ices, when the object approaches the Sun, sublimate and drag dust forming the typical cometary tails. The MBC’s orbits are the  typical of a main belt asteroid. It is known that dynamically is almost impossible for a comet acquire such an asteroidal orbit”.

The Spanish team findings may be useful to solve this riddle. They have observed and characterized the MBC P/2013 R3 (CATALINA - PANSTARRS ), located at 1.2 astronomical units of the Earth ( about 170 million kilometers) . The object just divided into at least four pieces, in a fragmentation process similar to that observed in splitting comets. “These four pieces, if the survive, would result in four new MBCs. It is likely that the current nucleus and at least the brightest fragment, can be observed in the future”, said Licandro.

Now, continued the astrophysicist, the IAC and IAA group tries to determine the elements of these four pieces and thus, finally figure out what is the nature of the nucleus of an MBC. In their observations, the researchers have used the GTC OSIRIS instrument , located at the Observatory of the Roque de Los Muchachos (La Palma ) and the Sierra Nevada Observatory in Granada.

J. Licandro (Instituto de Astrofísica de Canarias, Spain),  F. Moreno (Instituto de Astrofísica de Andalucía, IAA, Spain), A. Cabrera-Lavers and C. Álvarez (Gran Telescopio CANARIAS, GTC and IAC), F. Pozuelos, and A. Sota (IAA) reports that  broadband r' and g' Sloan filter CCD images of Main-Belt comet (MBC) P/2013 R3 (CATALINA-PANSTARRS) have been acquired with the OSIRIS instrument at the 10.4m Gran Telescopio Canarias on the island of La Palma (Spain). Inspection of the stacked CCD images obtained on October 11.07 and 12.08 UT shows that the MBC present  a central bright condensation of r' magnitude 17.5+/-0.1  and a tail longer than 4 arcmin in PA=242 deg. The central condensations is surrounded by two weaker condensations also with a star-like profile (FWHM = 1.5 arcsec), possibly fragments of the original nucleus. The first one placed at PA=40 deg, with a relative brightness of ~23% with respect to the nucleus-centered region is compatible with the secondary nuclear component reported in CBET 3658.  The second one is at PA=213 deg with a relative brightness of 5-10% respect to the central condensation. These fragments, named A, and B, are placed at distances of 3.4 and 2.8"  from the main condensation (3089 and 2485 km, respectively). In addition, a third still weaker condensation, called C, is found at PA=242 deg and with a relative brightness of just about 0.5 percent respect to the central condensation, at a distance of 36" (32700 km) from it. All those fragments are seen in both r' and g' filters. The brightest A fragment was also detected at the reported position in CCD images obtained at the 1.52m telescope of the Observatorio de Sierra Nevada in Granada on October 12.1 UT. No apparent relative motion of any of the A, B , or C fragments was detected in the course of these observations. Images suggest that the MBC has experienced a cometary-like splitting event.