IAC astronomers discover  'The Music of the Galaxies' 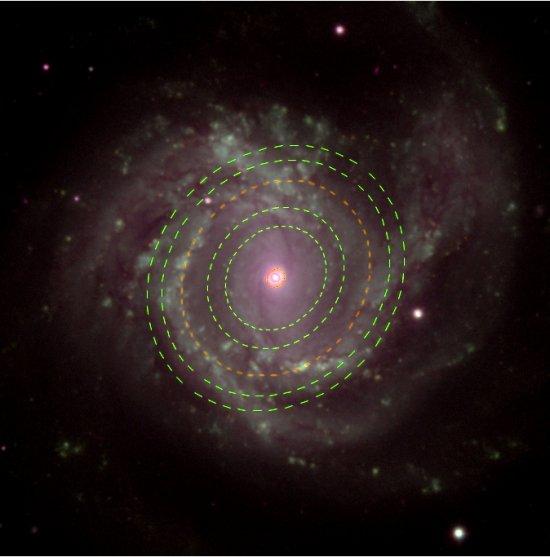 Image of Messier 6, one of the galaxies in the study. Superposed dashed ellipses are rings indicating concentric density waves in this galaxy. Source: SLOAN + IACbia
Advertised on
18/12/2013

Astronomers at the IAC have discovered complex patterns of resonances in the discs of spiral galaxies not previously described by theories.

Within the discs of spiral galaxies there are waves which propagate concentrically in the form of spirals. This is somewhat similar to the waves on the surface of a lake, or the standing waves on the strings of a violin, or on the surface of a drum, to use a musical metaphor. These are the so-called “density waves” . Astrophysicists from the IAC have discovered, in over a hundred galaxies which they have observed, that there are more density waves than predicted by theory and that there are relations between them forming a complex pattern of resonances, which orchestrate the “Music of the Galaxies”

The researchers of the IAC Joan Font Serra and John Beckman have studied the velocity fields ( the complete set of velocities in the material of a galaxy) of over 100 galaxies in order to find scientific evidence about density waves, and to measure with precision their velocities of propagation. These waves are lines of greater density of stars which propagate through the disc of a galaxy in the form of a spiral.

Until now the theory had described the existence in any galaxy with spiral arms of a density wave with its resonances. Many spiral galaxies contain, as well as arms, stars organized in a straight line pattern, called bars. For these galaxies the theory predicted two sets of waves, one in the inner part of the galaxy containing thebar, and the other in the outer part containing the spiral arms.

In their study, however, the astronomers found to their surprise more than two circular zones of density waves in almost all the galaxies analysed. The most frequently found number was four, although the maximum was seven.

“We could say that if we consider these density waves as waves in a vibrating instrument, in each galaxy we would be hearing a different symphony. That is to say the waves do not resonate in a chaotic or random way, but they follow patterns: there is orchestration in the music of the galaxies”

To reach these conclusions the astronomers have used a new method, and their own instrument GHaFaS, installed on the William Herschel Telescope at the Roque de los Muchachos Observatory, on the island of La Palma… GHaFaS is capable of measuring the complete velocity field of a galaxy in one go, using the light emitted by its ionized hydrogen.

The two paradoxes of spiral galaxies.

One could describe a spiral galaxy, seen from the side, as having the shape of a fried egg, with a bulge in the centre and a thin disc extending outwards beyond it.. the discs contain the spiral arms which glow with the light of millions of blue stars, which are the most massive and the youngest stars. Decades ago astrophysicists realized that there were two paradoxes related to these arms.

As Beckman explains “ spiral galaxies are like huge Catherine wheels, the fireworks which spin round on a nail.  But they are not solid; they consist of thousands of millions of stars. When we measure their velocities of  rotation about the centre of the galaxy we would predict that the arms would wind up in a couple of galaxy rotations and disappear. But the great majority of disc galaxies have arms, so they have not disappeared.

The answers to both of these paradoxes can be found in the theory of spiral density waves. “There exist waves, in spiral form, which rotate within galaxy discs, which keep the arms spiral, and which bring about the continuous formation of new massive blue stars, continually feeding the arms” explains the astrophysicist of the IAC. When the maximum density of a spiral wave passes through a region the gas in the region is compressed, causing the birth of new stars from the hydrogen which is abundant in the interstellar medium.

On the basis of this work we can explain more about the behaviour of these waves, and relate them to other observable parameters, such as the shape of the arms, the light distribution in the discs, or the presence of stellar rings in some discs. So we are offering new and useful data for the next generation of theories” summarises Beckman.