The journal Astronomy & Astrophysics is publishing a special volume of 31 articles about the cosmological results from the Planck satellite. 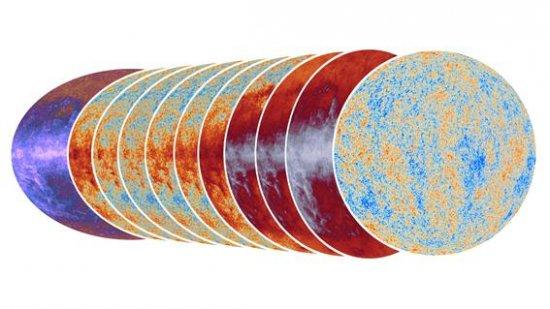 The stack of images in the figure shows: in the center, the nine all-sky images ranging from 30 GHz (left) to 857 GHz (right); at far left, a combined view of all frequencies; at far right, the all-sky image of the temperature anisotropies of the CMB der
Advertised on
05/11/2014

On May 14th 2009 the European Space Agency (ESA) launched into space from Kourou, in French Guyana, the Planck Satellite, together with the Herschel Space Observatory. The aim was to measure, with unprecedented resolution and sensitivity, the cosmic microwave background radiation (CMB) left by the Big Bang. This radiation is the oldest “light” in the Universe, emitted when it was only 380,000 years old.

The Astrophysics Institute of the Canaries (IAC), in collaboration with Spanish Industry, provided the electronic control system (REBA, Radiometer Electronic Box Assembly) for one of the two scientific instruments of this satellite: the LFI, the Low Frequency Instrument. Also IAC researchers form part of the Core Team, which works to produce and interpret the maps which are made by the satellite, and an astrophysicist of the Institute, Jose Alberto Rubiño, has coordinated the science group made up of over 50 researchers, dedicated to the study of clusters of galaxies detected via the Sunyaev-Zeldovich effect, which distorts the CMB.

Today Planck is clearly a technological and scientific success, as shown by the special volume which the journal Astronomy and Astrophysics (A&A) has dedicated to it, which contains an initial set of 31 articles base on cosmological data from over 15 months of Planck observations. Its impact has been enormous, and to quantify it since its appearance in the publication web archive astro-ph in 2013 it has received almost 5,000 citations in the ADS (Astrophysics Data System). The first article alone, dealing with cosmological parameters, has received some 2,200 citations (a rate of more than 100 per month). And three of the 22 articles published in scientific journals by the group coordinated by Rubiño are included in this volume. “This something very exceptional in astrophysics, and shows the great importance of this satellite for the scientific community,” stresses Rafael Rebolo, director of the IAC, and a co-investigator on this space mission.

Some 40 scientific institutions from Europe, the United States, and Canada have participated in the Planck Collaboration. The Spanish contribution has been important, not only from the IAC, which has been involved in this mission for over 20 years, but also from other centres such as the Cantabrian Physics Institute (IFCA), the University of Granada, the University of Cantabria, the Centre of Studies of Physics and the Cosmos of Aragon (CEFCA) and other universities such as those of Salamanca, Valencia, and Oviedo.

Since Arno Penzias and Robert Wilson discovered the microwave background radiation in 1965, which won them the Nobel Prize in Physics, many scientists have taken an interest in this remnant of the Big Bang. The study of this radiation is a field of considerable activity in Cosmology, because it sets limits to cosmological models. In particular observations of the CMB confirm the predictions of the Big Bang model, and more specifically of the cosmological “concordance model”.

The Planck Mission was designed to measure the emission over the whole sky at nine different wavelengths, which range from radio (1cm) to far infrared (300 microns). Several distinct sources of emission -of both Galactic and extragalactic origin- contribute to the observed characteristics of each of the nine images. Radio emission from the Milky Way is most prominent at the longer wavelengths, and thermal emission from interstellar dust at the shorter wavelengths. Other galaxies contribute to the background, above all in the form of unresolved sources. In the middle of the wavelength range of Planck the CMB dominates the sky at intermediate and high galactic latitudes. The spectral and spatial characteristics of all of the above mentioned sources are used to extract a whole sky image of the minute anisotropies in the CMB temperature with unprecedented accuracy. The properties of these fluctuations are used to infer the basic parameters of the universe close to its origin.

As announced last March, the Planck team has established in the studies presented here, the new “cosmic recipe” that is to say the relative proportions of the constituents of the Universe: baryonic (“normal”) matter, of which the stars and the galaxies are composed, makes up 4.9% of the matter content of the Universe. “Dark Matter”, which up to now has been detected only indirectly through its gravitational influence on galaxies and clusters of galaxies, makes up 26.8%, rather more than in previous estimates. On the other hand, the “Dark Energy”, a mysterious force which is considered to cause the acceleration of the expansion of the Universe, makes up 68.3%, rather less than previously thought.

The Planck team has studied the statistical properties of the CMB in great detail, including the statistical distribution of the temperature anisotropies. Although the observations on small and intermediate angular scales coincide very well with the predictions of the model, Planck has given the first clear evidence that the distribution of the primordial fluctuations was not the same on all scales, and has more structure than expected on large scales. An anomalous signal has been found in the form of a substantial asymmetry in the CMB signal observed in opposite hemispheres of the sky: one of the two hemispheres appears to show a significantly stronger signal than the other. Also the Planck data have been able to set more rigorous constraints on theories of cosmic inflation.

The CMB is not only an image of the Universe taken 13,8 thousand million years ago, it is also an image which has been distorted during its journey to us because the photons of the CMB have interacted with the large scale structure they have encountered (such as galaxies and galaxy clusters). The scientists have been able to extract from the Planck data a map of the gravitational lensing effect observable today in the CMB and which covers the whole sky. The maps published in these articles show a new way to investigate the evolution of structure as the Universe itself has evolved.

The research group coordinated by Rubiño has produced the largest catalogue of galaxy clusters based on the distortion of the CMB spectrum caused by highly energetic electrons in galaxy clusters, known as the Sunyaev-Zeldovich effect. “ The combination of these measurements of galaxy clusters detected by Planck and the measurements of the anisotropies of the microwave background gives us a valuable astrophysical tool to characterize the physical properties of neutrinos, and in particular of their mass” comments Rubiño.

The volume which is being published now incorporates the final version of the results announced months ago, based on the measurements of the intensity of the microwave background radiation. In December ESA and the Planck Consortium will release publicly the results obtained on the polarization of this radiation.