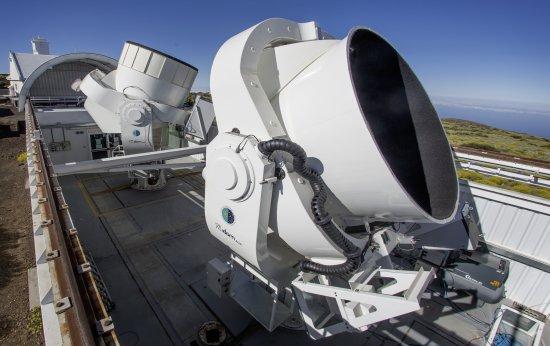 This Saturday, 27 June, His Majesty the King will inaugurate the two telescope that make up the QUIJOTE Experiment, a project led by the Instituto de Astrofísica de Canarias (IAC), together with six robotic telescopes: MAGEC, from Majorca (Spain), SLOOH (OTA) and Las Cumbres (LCOGT) from the United States, MASTER (RUSSIA), QES (Qatar) and AMOS-CI (Slovakia).

After the ceremony, which will take place at 18:00, visitors will be able to visit the QUIJOTE installations, and the other six telescopes will be described to them. The event will be webcast live from the websites of the IAC (www.iac.es) and its collaborators (sky-live.tv and slooh.com). Representatives for each of the telescopes will be present, and Los Sabandeños, a well-known folklore group from the Canary Islands, will give a performance.

In search of the remnants of the Big Bang

QUIJOTE, which comprises two 2.5 metre telescopes located at Teide Observatory (Tenerife), is a cosmological experiment with the objective of studying the polarization of the cosmic microwave background, with particular emphasis on the conditions that gave rise to inflation (the primordial phase of rapid expansion of the Universe).

QUIJOTE I, which has been in operation since 2012, observes at frequencies 11, 13, 17 and 19 gigahertz, and is dedicated to characterizing polarized emission from our Galaxy. It uses complex, cryogenically cooled mechanisms to modulate the microwave radiation. The recently installed QUIJOTE II, will operate between 30 and 40 gigahertz, and is designed to characterize the polarization of the cosmic microwave background with a view to detecting remnants of the birth of the Universe in the form of gravitational waves generated a fraction of a second after the Big Bang.

Some telescopes can be programmed and operated remotely, so that the astronomer need not be on site to direct the telescope. A distinction is made between telescopes that operate by remote control (via the internet) and those that are programmed to operate within pre-defined parameters (robotic telescopes). In the former case, the astronomer decides the observations to be carried out, whereas robotic telescopes perform routine tasks, such as making continuous observations of the whole sky or observing previously programmed objects without the need for continuous human intervention.

Las Cumbres Observatory Global Telescope Network (LCOGT) is an integrated network of robotic telescopes distributed worldwide for both professional and citizen science. Its targets range from supernovae to extrasolar planets. With its headquarters based in La Goleta (California, USA), there are at present telescopes located at Haleakala (Hawaii, USA), McDonald (Texas, USA), Cerro Tololo (Chile), Sutherland (South Africa) and Siding Spring (Australia). Two 0.40 m telescopes have been installed at Teide Observatory (Tenerife, Spain), and it is planned to install four more telescopes of the same diameter and a further three of 1 m diameter.

The two SLOOH telescopes (the Optical Telescope Array - OTA) of diameters 50 and 35 cm), located at Teide Observatory since 2004, form part of a network of small robotic telescopes on various sites worldwide. These are telescopes designed for outreach purposes and will permit users, via the internet, to operate them remotely to obtain images of the sky. They are owned by the Telescope Society in Delaware (USA). The OTA has obtained 2.4 million images in real time of more than 40 000 celestial objects and has participated in numerous discoveries with leading astronomical centres.

MASTER, a project of the Sternberg Astronomical Institute of the University of Moscow M. V. Lomonosov (Rusia), comprises eight nodes distributed worldwide, each one with two 40 cm telescopes in parallel. The main objective of the project is to measure the polarization and chromatic properties of the initial optical emission from gamma ray bursts (GRBs) and to carry out a rapid whole-sky survey every night. The project aims to solve a number of fundamental problems: the search for dark energy through the discovery and photometry of supernovae, the search for extrasolar planets, the effects of microlensing, the detection of small bodies in the Solar System, and the monitoring of space junk. All the MASTER telescopes have the capability to be guided via gamma ray burst initial optical emission alerts in various filters and polarization planes.

The QES (Qatar Exoplanet Survey), of the Qatar Environment and Energy Research Institute (Qatar) is a single instrument dedicated to a whole-sky search for exoplanetary transits. Its goal is the detection of hot exoplanets with masses between those of Neptune and Jupiter around low-mass stars. Eight 0.1 m telescopes have been installed at Teide Observatory.

The AMOS-CI (All-sky Meteor Orbit System-Canary Islands) facility of the Department of Astronomy, Earth Physics and Meteorology of Comenius University (Bratislava, Slovakia) consists of two sets of cameras that register meteors in the atmosphere at an altitude between 80 and 120 km and in a range that covers hundreds of kilometres from the station. The two stations, one in Tenerife and the other in La Palma, permits the determination of the meteors' trajectories through the atmosphere and their orbits around the Sun, which in turn enables us to link the meteors with their objects of origin. In May of this year, this telescope captured a very bright asteroidal-type meteor that passed over Tenerife at a height of 84 km before disintegrating above the ocean.

MAGEC (Majorca cAnary survey of very fast movinG sky objECts), of the Observatorio de Astronomía de Mallorca (Spain) is a single facility dedicated to the discovery and monitoring of celestial objects that move relatively quickly across the sky (mainly asteroids and comets). Among these objects are included Near-Earth Objects (NEOS), asteroids that cross the Earth's orbit, and that are therefore potential hazards with the possibility of a collision. The facility comprises five (two 0.45 m, an 0.40 m, an 0.30 m and an 0.17 m diameter) telescopes.

ATTENTION: Accreditation details for the media

Interested media representatives must give their accreditation, including their first and last names, and identification document numbers, when applying to prensa [at] iac.es ( ).

The IAC will provide the media transport to Teide Observatory, scheduled to leave IAC headquarters in La Laguna at 16:00 h on Saturday, 27 June.