"From La Palma to the sky"

Sergio Matos thanked the participants for visiting the island of La Palma and remembered that, in the last few years, thanks to the official institutions in La Palma and the IAC, “the most direct path to the sky is from the Observatorio de los Muchachos, in La Palma”. He pointed out that the future Cherenkov telescopes will contribute to the development of the Island.

This was followed by a speech of the mayor of the municipality in which the Roque de los Muchachos Observatory is located, where the construction of the first of the 4 Large Size Telescopes (LST) has begun, and first light is foreseen next year. After welcoming the participants, Martín Taño announced that the outreach talk which was planned yesterday afternoon in Garafía, cancelled due to the meteorology, will take place in the next days.

During his address, the president of the Cabildo of La Palma thanked the presence of more than 200 participants in this meeting, who will visit the Observatorio del Roque de los Muchachos on Saturday. He highlighted the importance of the cooperation of the local authorities and the researchers in the field of Astrophysics, and also the protection of the sky of La Palma, thanks to which the island has optimal conditions to perform astronomical observations. He reminded the possibilities the LST telescopes will provide to obtain new information of the Universe in high energy, and he thanked the 20 million Euros of FEDER funds which allow to carry out this astrophysical research and are complemented with 3 million Euros provided by the Cabildo.

The director of the IAC, Rafael Rebolo, mentioned that 500 people work in the field of Astrophysics in the Canary Islands. He reiterated the commitment of the Observatorio del Roque de los Muchachos with the environment, and he thanked the collaboration of the inhabitants of La Palma and the local authorities to allow this field of Research to continue advancing. He also highlighted the commitment of the IAC for the Cherenkov Telescope Array project to be a success.

Rene Ong, co-spokesperson of CTA, introduced his talk reminding the participants of the progress in the LST construction. He remembered that in 2003 the first MAGIC telescope was inaugurated and he payed an homage to Eckart Lorenz, founder and promoter of the HEGRA and MAGIC Collaborations. He continued with the progress made since the last meeting in Rio de Janeiro; highlighted the fast construction of LST1; he introduced the new project manager Wolfgang Wild and the new members of the Project Office, and also reported on the completion of the new Science with CTA report which will be published soon. He continued presenting the main technical challenges ahead, including the installation of the LST1 dish, which will happen soon. He also reminded the CTA Consortium has 1240 members in 32 different countries.

The next presentation was from Stefano Vercellone, Physics coordinator of CTA and researcher of the Osservatorio Astronomico di Brera del INAF (Istituto Nazionale di Astrofisica), Italy, who reviewed the different scientific objectives of the project.

Stefan Funk, from the University of Stanford (EEUU), explained in his talk “Data challenge” thr aim to make more realistic simulations of the data at the highest level. Later, Sera Markoff, of the University of Amsterdam (The Netherlands), talked about the need to have optical telescopes to make complimentary follow-up observations of the Cherenkov observations; and Fabian Schüssler, from the Institute of Research of the fundamental laws of the Universe (IRFU) in Saint Aubin, France, explained the possibilities CTA offers to carry out follow-up observations when gravitational wave alerts appear.

The astrophysicist Jorge Casares of the IAC, local researcher invited to give a Highlight Science talk, closed the morning session with the talk “X-ray and Gamma-ray binaries: an optical perspective”.

He explained that optical observations can give clues to what happens when black holes “wake-up” and to find correlations of optical flares and the X-ray activity in the interior. A report on transient binaries of X-rays, one of the unresolved astronomical puzzles, and gamma-ray binaries discovered recently, closed the morning session.

During the afternoon technical sessions will be chaired by the director of the CTA Observatory (CTAO), Ueli Straumann, in which the coordinators of the different phases of the project will present the latest status.

The Observatories of the Instituto de Astrofísica de Canarias (IAC) are part of the network “Insfraestructuras Científicas y Técnicas Singulares” (ICTS) of Spain. 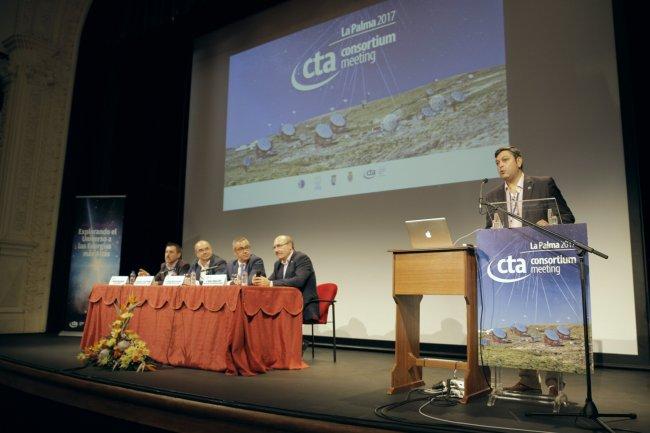