The most complex molecules in the Universe 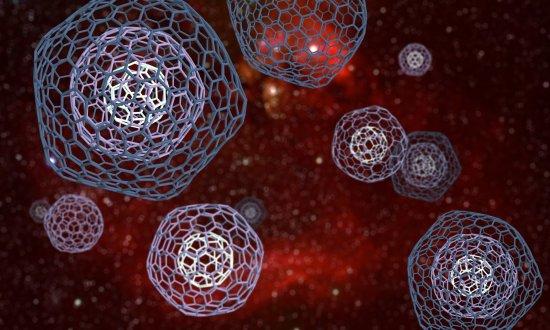 Artist's impression of  complex fullerenes (carbon onions or multishell fullerenes such as C60@C240 and C60@C240@C540) produced by a planetary nebula and expelled into the interstellar medium. The connection between these molecules and certain diffuse int
Advertised on
25/01/2013

This finding, which also provides a key to unravelling one of the most enigmatic phenomena in astrophysics - diffuse interstellar bands - has just been published in Astronomy and Astrophysics Letters

Researchers at the Instituto de Astrofísica de Canarias (IAC) have found evidence that the presence of ‘carbon onions’ and other large molecules derived from fullerene (a form of carbon) could be commonplace in space. These are the most complex molecules detected so far and their discovery has important implications regarding our understanding of circumstellar and interstellar physics and chemisty, as well as of molecular processes in the final stages of stellar evolution.

The study, which combines astronomical observations and physical theory, has found evidence of these molecules in the surroundings of two planetary nebulae rich in the most common form of fullerene (C60), indicating that its presence could be more widespread than previously thought. ‘Planetary nebulae [low mass stars in the final stages of their lives] produce organic molecules that they later eject into space, which is why they are fundamental to our understanding of molecular processes in the interstellar medium, where new stars and planets are formed, and they help us understand the formation process of molecules that are the precursors to life,’ explains Anibal García-Hernández, first author of the article.

In the past, scientists had speculated concerning the idea that fullerenes, which can act as traps for other molecules and atoms, could have brought substances to the Earth that might have given rise to the origin of life. Evidence for this theory stems from the fact that C60 fullerenes had been found in meteorites carrying extraterrestrial gases. However, ‘all this is mere speculation,’ says García-Hernández.

The work also provides new insights into understanding the origin and composition of the so-called diffuse interstellar bands (DIBs), one of the most enigmatic phenomena in astrophysics. Dispersed throughout space, the molecules responsible for these bands capture part of the visible light emitted by stars, which then reaches us slightly dimmed. When they examined the optical spectrum of planetary nebulae, the researchers found that two known DIBs seemed particularly intense, and that a hitherto unknown band appeared.

These observations concur with earlier theoretical studies on large and complex fullerenes (carbon onions, or multishell fullerenes such as C60@C240 y C60@C240@C540) and their hypothetical behavior in space: ‘These complex fullerenes cannot be studied in the laboratory with present techniques, so we’ve based our work on theoretical calculations available in the literature and combined these with astronomical observations, and the evidence agrees,’ García-Hernández explains. ‘The fullerenes in their multifarious manifestations (carbon onions, fullerene clusters, or even complex species formed by fullerenes and other molecules like hydrocarbons, or atoms) could hold the key to solving the mystery of the DIBs,’ he concludes.

‘The next step is to characterize all the DIBs in these planetary nebulae, and to synthesize and characterize new fullerene-based molecules, comparing them with astronomical data,’ adds Jairo Díaz-Luis, co-author of the study. ‘Unravelling the secret of the DIBs would aid us in understanding what the interstellar medium is made of in every part of the Universe,’ he concludes.

Discovered 90 years ago, diffuse interstellar bands are found in every direction in space (more than 400 are known). They are more intense in areas of abundant interstellar dust and are characterized by their absorption of part of the visible light emitted by stars. Indeed, we know they exist because certain wavelengths are dimmed when we observed the visible spectrum emitted by a star. Researchers therefore deduce the presence of something between us and the star. This material  generates characteristic bands of absorption (so-called diffuse bands) in the spectrogram of the star (like a fingerprint).

Researchers can study DIBs and their composition only indirectly by assuming, on the basis of laboratory experiments and theoretical calculations, which class of molecules could trap the light in this particular way. It has been suspected for some time now that they could be generated by carbon-based molecules. The IAC team confirm this theory and also identify a particular class of carbon molecule, complex fullerenes (carbon onions or multishell fullerenes). Their results will be presented at the next International Astronomical Union symposium on diffuse interstellar bands, to be held in The Netherlands next May.