Scientists from the US, Japan and Europe meet to discuss the results of the CLASP-2 experiment

CLASP and CLASP2 are opening a new window for the investigation of magnetism in solar and stellar physics.

In 2008 an international team of solar physicists started a novel project of space experiments. By means of telescopes and instruments launched on board of NASA suborbital rockets, unprecedented measurements of the polarization of the ultraviolet light emitted by the Sun in several atomic lines were performed. Such spectro-polarimetric observations are needed for obtaining information on the magnetic field in the enigmatic chromosphere-corona transition region of the solar atmosphere, where in less than 100 km the plasma temperature jumps from ten thousands degrees in the chromosphere to more than one million degrees in the corona. The corona is that extremely rarified and extended region of the outer solar atmosphere visible with the naked eye only during a total solar eclipse.

In September 2015, the Chromospheric Lyman-Alpha Spectro-Polarimeter (CLASP) experiment achieved the first measurement of the linear polarization produced in the hydrogen Lyman-α line of the solar ultraviolet radiation, opening a path for probing the magnetic field and the three-dimensional structure of the plasma at the base of the solar corona. After this success, the Chromospheric LAyer Spectro-Polarimeter 2 (CLASP-2) was proposed and developed to measure the linear and circular polarization of the most intense radiation produced by the ionized magnesium atoms of the solar chromosphere.

Recently, in April 2019, CLASP-2 was successfully launched from the station that NASA has in White Sands Missile Range (New Mexico; USA), measuring for the first time the detailed wavelength-dependent variation of the light polarization in the important region of the solar ultraviolet spectrum located around 2800 Angstroms. “The polarization signals measured by CLASP and CLASP-2 in several spectral lines of the solar ultraviolet spectrum are providing unprecedented information on the magnetic field in active and quiet regions of the solar chromosphere”, says Javier Trujillo Bueno,  Research Professor of the CSIC at the IAC and one of the four Principal Investigators of CLASP and CLASP-2.

Both space experiments were motivated by theoretical investigations carried out by physicists of the POLMAG group of the IAC (see http://research.iac.es/proyecto/polmag/ ).

This group has organized the present meeting of the international CLASP-2 team, formed by about 25 researchers from USA, Japan and Europe. The CLASP-2 Science Meeting is taking place this week at the IAC headquarters in La Laguna. On Thursday November 14, the team will visit the Teide Astrophysical Observatory after two days of scientific talks and discussions about the results obtained thanks to such novel space experiments, which are opening up a new diagnostic window in solar and stellar magnetism. 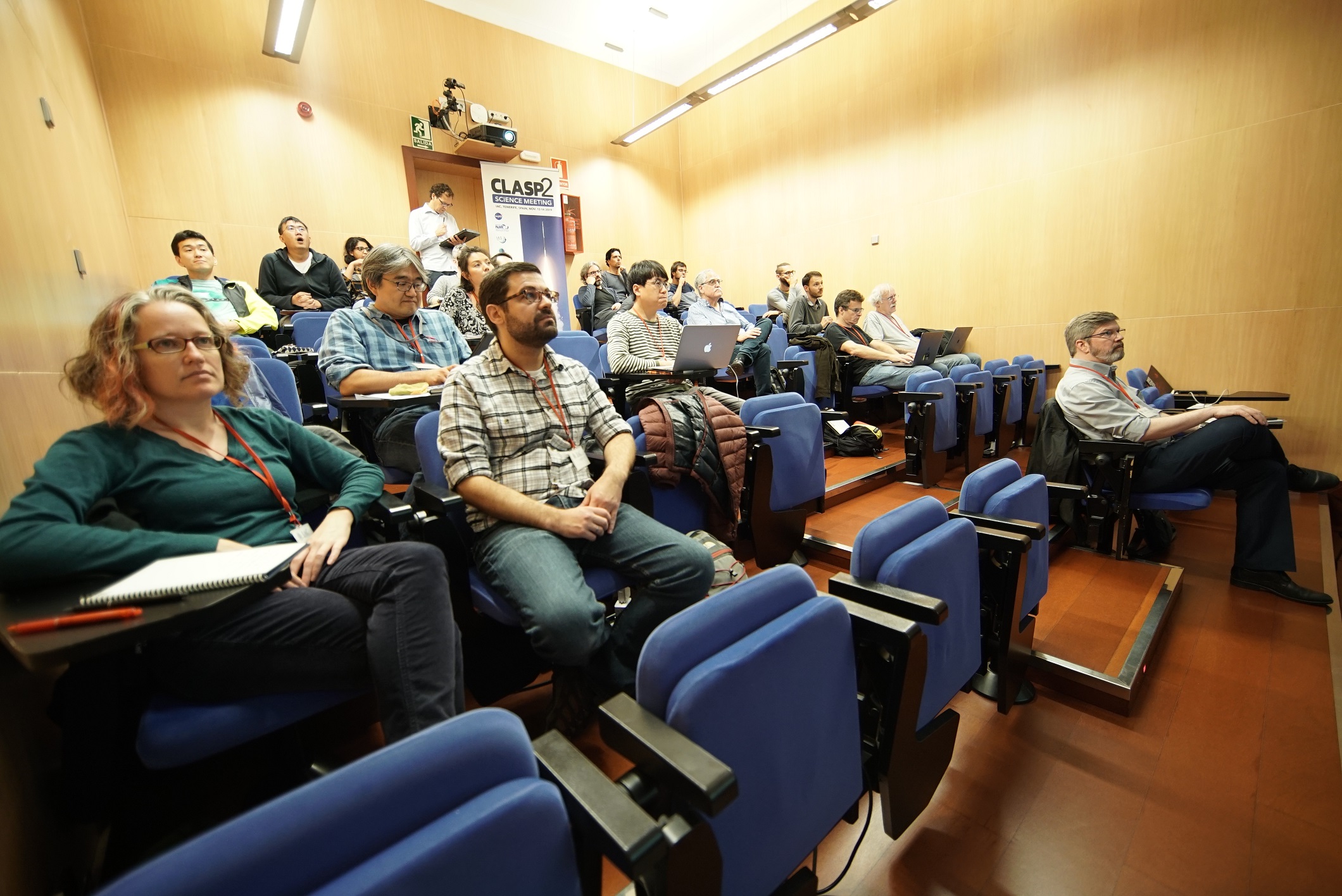 Contact:
Javier Trujillo, Researcher at IAC and PI of CLASP and CLASP-2: jtb [at] iac.es