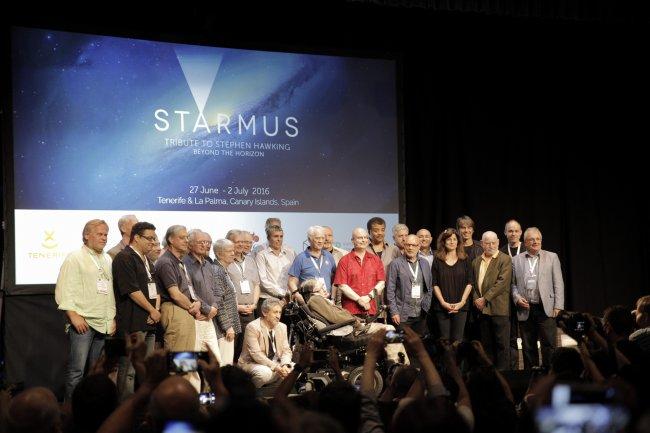 The third edition of the Starumus festival began this aftenoon in Tenerife with the welcome address of Garik Israelian, IAC researcher, founder and director of Starmus, who said that the motto of the festival this time is Beyond Starmus "because it is a special event in honour of Stephen Hawking". He was followed by Rafael Rebolo, the Director of the Instituto de Astrofísica de Canarias (IAC) who made the point that "we are very proud of the work of Stephen Hawking, and for that reason we have named him Honorary Professor of the IAC". He also stressed the potential of the Canary Islands for attracting major telescopes in the future. He was followed by Carlos Alonso, the President of the Cabildo of Tenerife and Teresa Lorenzo, Councillor for Tourism, Culture, and Sports, who both gave their addresses of welcome.

With the theoretical physicist and popularizer Jim Al-Khalili as moderator the first invited speaker was Adam Reiss, Nobel Laureate in Physics 2011 for his share in the discovery of the accelerating expansion of the universe. He explained how distances in the universe are measured, and he told us that the cosmos seems to be expanding some 8-9% more quickly than predicted by the standard model, from the Planck satellite observations of the cosmic background radiation.

Another Nobel Laureate,Robert Wilson, explained how they had discovered this radiation and he emphasized the importance of current experiments studying its polarization, such as QUIJOTE at the Teide Observatory, for improving our understanding of the origin and evolution of the universe. Wilson, who has been invited to STARMUS for the second time, talked about “a new instrument to make unexpected discoveries, as happened with the cosmic microwave background”.

Brian Green, a physicist at the University of Columbia, and author of the popular book “The Elegant Universe” commented that our universo could be one of many universes. He talked about string theory and the nature of reality. “The beauty of the theory of the multiverse is that there could be universes with different proportions of dark energy, and that we live in a universe in which the fraction of dark energy is compatible with the formation of galaxies, and with the emergence of life”.

Brian Cox, and Neil DeGrasse Tyson, physicists, and great specialists in outreach, from the United Kindgdom and the United States, respectively, talked in a humorous way about the differences between the US and the UK in communicating science, and about how to make complex scientific ideas attractive and accessible to the general public.

The planetary geologist Alfred McEwen, commenting about whether we should keep on looking for life on Mars, noted that there are a number of surveyors and rovers on Mars studying the planet and looking for signs of water and life. He said that there is evidence for liquid water in the Martian crust, which is protected from radiation. He pointed out that “The ocean of Europa (the satellite of Jupiter) contains twice or three times the water as there is on Earth”. He said that there could be life on Europa as it has water and energy. He concluded by saying that “Life on Mars, and on Europa, could be very rare, but if we find it at all it would be a great step forward for science”.

The first sesión was brought to an end by Anthony McCarten, who produced and scripted the film “The Theory of Everything” based on the life of Stephen Hawking. He sent a message to “Stockholm” asking for the Swedish Academy to stop dithering and award the Nobel Prize to the British cosmologist and physicist.

The second session of the afternoon was started off by Barry Barish, a scientist on the LIGO project, who reminded us that Einstein himself thought that gravitational waves could never be detected, but that after 100 years of General Releativity “we have detected them”. He continued “LIGO has allowed us to detect the most massive stellar black holes observed until now, and we hope to be able to detect the traces of gravitational waves in the cosmic microwave background” which is one of the objectives of the QUIJOTE experiment at the Teide Observatory.

The Canadian science fiction writer Robert J. Sawyer, winner of many awards, cited Ray Bradbury that “our work is not to predict the future but to warn about the future”.

Peter Schwartz, a futurologist and founder of  the Global Business Network (GBN), an expert in artificial intelligence (AI) pointed out its three main risks: the risk for employment, an AI incompetent which does not carry out orders, and and AI which wants to dominate us. He said that “Present forms of AI are really productive for companies, but will will they be able to carry out non-routine tasks?”.

Joel Parker, who worked on both ESA’s Rosetta Mission and NASA’s New Horizons mission, talked to Starmus about what the comets can tell us about the origin of the solar system. “To find answers to this question” he said, “we landed on a comet”. Parker, who showed some spectacular pictures taken from Rosetta, told us that it had not found ice on comet 67P/Churyumov-Gerasimenko, but explained that “there must be ice present because of the gas and water vapour we detected around it” He also regaled us with spectacular pictures of Pluto from New Horizons, showing its layered atmosphere and its large ice plain unmarked by meteorite impacts, revelaing its extreme youth.

The astrophysicist Steve Balbus gave a talk with the title “Why did the fish come out of the sea?” He pointed out that the similarity in angular size of the sun and moon implies a similarity in the size of the tides they raise in the seas on Earth. This causes tides with strong variations in height, leaving pools where the fish could optimize their adaptation to life on land, which occurred during the late Devonian period some 300 million years ago, and was a key step towards the eventual evolution of all land animals including ourselves.

Finally, Eric Betzig, Nobel Laureate in Chemistrhy 2014 talked about the big and the small, about the role of telescopes and microscopes in our understanding of the universo and of ourselves. “ We might think” he said, that making bigger and bigger telescopes me would automatically collect more light, but we need to compensate for the aberrations produced by the atmosphere. To try to reduce this distortion astronomers put large telescopes on mountain tops, such as here in the Canaries but also need to work on systems such as adaptive optics to optimize image quality. He compared this work with his development of the PALM technique of super-resolution for microscopes for which he was awarded the Nobel Prize, and also discussed newer more advanced techniques which he is helping to develop.

Starmus, a multidisciplinary festival which brings together art, music, astrophysics and space science, is being celebrated until 2nd June in Tenerife and La Palma. The Instituto de Astrofísica de Canarias and the Gran Telescopio CANARIAS are again collaborating with Starmus.