Stephen Hawking, key figure on the 3rd day of Starmus 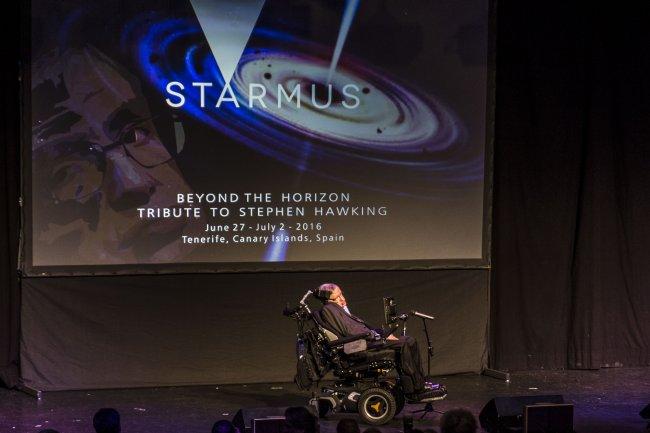 The cosmologist and theoretical physicist Stephen Hawking, who was recently named Honorary Professor of the Instituto de Astrofísica de Canarias (IAC) was the key figure of the first session, -moderated by Brian Cox, physicist and science popularizer on the BBC-  on the third day of the Starmus Festival in Tenerife. In his talk, with the title “A brief History of Mine” he began by describing his childhood, and his years at school and at university, until he obtained his studentship at Cambridge, to study for his PhD in cosmology. He explained that during his student years “they diagnosed my illness and I began to treasure every moment”. He might have worked on his thesis with Fred Hoyle, then one of the most famous cosmologists and one of the authors of the Steady State cosmology, but in the end his supervisor was Dennis Sciama, who was less well known at the time. The discovery of the cosmic background radiation in 1964 finally put paid to the Steady State theory.

After obtaining his doctorate his passion for studying the origin of the universe grew, but his research centred on the physics of black holes as related within the theory of General Relativity. Hawking talked about how his prediction about the event horizon during the merger of two black holes had been recently confirmed by the results of the LIGO experiment. He then explained that his interest in cosmology, which he had left to study black holes in the seventies, revived when the inflation scenario was proposed, a scenario in which there was a very rapid expansion of the universe just after the Big Bang. He recalled the great event of the detection of the anisotropies of the background radiation by the COBE satellite (which were also detected from the ground by the Tenerife experiment), and he added “Cosmology became a precision science with the results of WMAP, which have been improved by the Planck satellite, which may detect primordial gravitational waves (a possibility which might also be awaited from the QUIJOTE experiment at the Teide Observatory). “The detection of primordial gravitational waves would be like having a quantum history written on the sky”.

It is important, stated Hawking, that scientists explain their work, and especially the cosmologists. Commenting on one of his most famous books “A Brief History of Time,the Big Bang, and Black Holes (1988) which has been translated into thirty languages, he said that “the sales went surprisingly well, although I don’t know many people who have read the whole of it, or understood it all” he said ironically. In his final message he invited the public to look upwards at the stars, and not downwards at their feet, to ask where the universe has come from, and to be curious. “The most important thing,” he concluded “is never to give up”.

After his lecture, a tribute was paid to him in the form of a fictitious film in which he appears as a rap performer, in which the words of the songs talk about being afraid of black holes (Fear of Black Holes).

The musician Brian Eno, in his talk about the interaction of Art and Science, started by saying that science is a public conversation about life, and set out his theory about why the human brain is smaller than it was in previous epochs “Now we are much more specialized” he said “and have access to many other brains, those of our collaborators in a scientific project, for example”. According to him “Science is how we discover things, whereas art and culture in general are how we digest them”.

Joseph Stiglitz, Nobel Laureate in Economics in 2001 and vice-president of the World Bank between 1997 and 2000, first commented on how much he was learning about the universe and the other subjects at this festival. Then he began to analyze the increasing inequality which has become prevalent in the majority of countries in the world. “Is this due to the laws of Nature or the actions of men?” he asked. In his opinion “The inequality is the result of human actions, it is something we have chosen, it is an option. The proof,” he stressed “is that the laws of economics are applicable to all countries, but the results are different from country to country. In the United States” he pointed out “bankers earn 300 times as much as the average worker, even if they ruin the banks they run”.

Nowadays salaries are not proportional to productivity, and this disconnection started from the 1980’s.  This has led to inequalities in health, and access to justice, as well as to disparities in wealth. “There is also inequality of opportunity, the USA is, ironically, among those countries with where opportunity is most restricted. Those economies with the least inequality and greatest equality of opportunity also work best. The change in economic policies since 1980 helped to augment the inequality between the top 1% and the rest of the population. In the USA only 62 individuals have 50% of the wealth of the country.” The economist concluded on a slightly more optimistic note, “Inequality is not inevitable, it is the result of the way we have changed the rules of the game”.

The astrophysicist Martin Rees, of the University of Cambridge, in his talk “From Mars to the Multiverse - the post-human future” said that “Certain people now walking on our planet will one day tread the soil of Mars”. He talked about the Kepler mission, in which thousands of exoplanets have been discovered, (and in which the IAC participates). He suggested that “there could be many other universes in the multiverse, and there could have been many Big Bangs, not just one. If there were many, they might not be governed by the same laws of physics, and he finished by stating that “ Our planet is special, it is unique in that we know it harbours life, and we are the first generation capable of making significant changes to the planet”

Elizabeth Blackburn, Nobel Laureate in Medicine for discovering the enzyme telomerase, a chemical which helps to structure the telomeres which form and protect the ends of chromosomes and which play an essential role in cell ageing, explained how she made her discovery. “The more the telomeres of a living creature are shortened, the greater is its mortality” she explained, because shortening the telomeres brings a rise in illnesses such as cancer or Alzheimer’s disease. “Each time a cell divides, the ends of the chromosomes are shortened”. But the good news is that laboratory rats can regenerate their cells and their telomeres. To conserve them Blackburn recommended three basic rules: exercise, sleep well, and reduce stress.

Rusty Schweickart, an Apollo 9 astronaut, told us about his 15 year involvement in Planetary Defence (against asteroid and meteorite impact). Three actions are needed for this to succeed: the first to have an early warning system, which needs an infrared space telescope which we don’t have; the second is to divert the danger, and thereby reduce its destructive capacity, by evacuation for a smaller meteorite, or in the case of a larger body, change its orbit, perhaps even using a nuclear explosion, although there will be new methods in the future. The third action is to make agreements on all such activities on a planet-wide scale. “Any decision would involve the whole planet, so that we must take decisions for the planet as a whole and not as individual nations, but we know that at geopolitical level this type of decisions are difficult to take”. He ended his talk by encouraging all the “Crew of Spaceship Earth” to celebrate June 30th , Asteroid Day, and to sign a declaration so that world leaders become aware of the problem and that there is international coordination to take speedy decisions in the face of a possible cosmic impact.

David Gross, Nobel Prize in Physics 2004 for the discovery of asymptotic freedom, spoke of the great challenges of physics. He stated that "we are now at the point where we can control individual atoms". He spoke of the Unification Theory Forces and whether the particles are different modes of vibration of a superstring. According to Gross, "the most important product of knowledge is ignorance " and challenge of science is to "defend the rationality, transparency and collaboration."

Then there was a discussion between the biologist Richard Dawkins and the astrophysicist Steve Balbus about evolution and about whether there is life in other places in the universe. Dawkins said that we would recongnize life by the complexity of its organization and its apparent design, and that we know that all life on Earth has a common ancestor. Balbus asked whether extraterrestrials would have developed eyes. Dawkins replied that this would depend on the planet. “If it was covered in dense cloud eyes wouldn’t be much use”. He wound up the discussion by saying that “It is very probable that there is life in other parts of our Galaxy and in the universe. If we were alone this would imply that the origin of life is absurdly improbable. This does not seem to be a plausible idea”.

The sessions closed with a survey of human achievement in circumnavigating the world, and with spectacular images of the Earth taken from the International Space Station, with comments by the astronaut Chris Hadfield, and with the musician and astrophysicist Brian May presenting a small device for looking at 3D images of the universe, uniting science and art yet again.