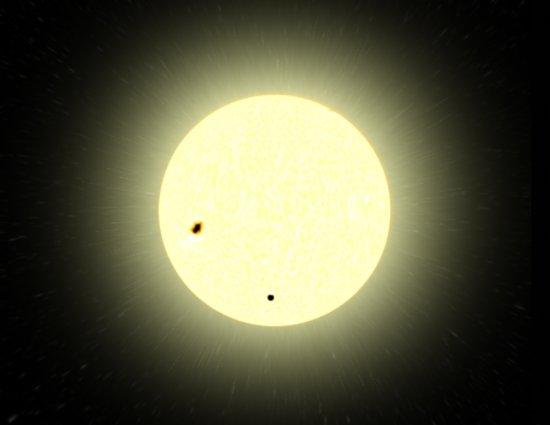 Artistical representation. This image is to scale. Note that the planet is in the lower bottom; the irregular spot in the left of the star is a star-spot. Made by Tautenburg Observatory, Germany.
Advertised on
03/02/2009

The CoRoT satellite has allowed the discovery of the smallest exoplanet ever characterized, of a size comparable to that of the Earth. This new object, named CoRoT-Exo-7b, is very different: its diameter is about twice that of the Earth. With a revolution period or “year” of only 20 hours, it is located very close to its primary star, so that its temperature is extremely high, between 1,000 and 1,500 degrees Celsius. Astronomers were able to detect the new planet by the very slight dimming of the star that occurs at regular intervals, each time that the planet passes in front of it.

Most of the over 330 planets discovered so far are giant planets made up mostly of gas, like Jupiter and Neptune. CoRoT-Exo-7b density has not yet been well determined: it could be a rocky object like the Earth or covered with liquid lava or a mixture of both. “Identiffying the nature of this terrestrial planet will require many future investigations - we may term this as the beginning of 'exoterrestrial astronomy'” comments Hans Deeg, investigator at the Instituto de Astrofísica de Canarias and member of the discovery team.

Astronomers have been detecting planets orbiting around stars for some fifteen years. Today, over 330 are known, most of them quite large, with up to twenty times the mass of Jupiter. But very few have masses comparable to that of the Earth and the other terrestrial planets (Venus, Mars, and Mercury) because they are extremely difficult to detect. “Finding such a small planet wasn’t a complete surprise”, says Daniel Rouan, researcher from LESIA at the Observatoire de Paris, who coordinates the project. “CoRoT-Exo-7b belongs to a class of objects whose existence had been predicted for some time", he adds.

“Most of the methods used so far are sensitive to the mass of the planet, while CoRoT is sensitive to its size, which is an advantage,” explain Roi Alonso and Magali Deleuil, researchers at LAM (Marseille). “Another of CoRot’s advantages is the fact of being in space, where disturbances are much smaller and the periods of uninterrupted observations are much longer than from the ground,” adds Hans Deeg.

The internal structure of CoRoT-Exo-7b particularly puzzles scientists. “It is a question that has attracted the attention of the astronomical community for several years: Are there also “Ocean Planets”? These would be objects originally composed to a half by ice that would have drifted towards their star, the ice then melting to form a liquid envelope,” says Alain Léger, from IAS (Paris).

This discovery benefited from complementary observations made thanks to an extensive European telescope network operated by various institutes and countries. The European Southern Observatory at Paranal and La Silla (Chile) and the Canada-France-Hawaii Telescope on Mauna Kea, Hawaii (CNRS, CNRC, and University of Hawaii). At the IAC, planet candidates found by Corot undergo a routine surveillance, and the IAC 80cm telescope at Teide Observatory was the first one that reobserved Corot-Exo-7b after its detection by CoRoT. Further observations at IAC with the newly developed FASTCAM instrument - a camera of extremely high resolution - on the 1.5m TCS and the 2.5m NOT telescopes excluded other sources that may mimic the signal from the planet and were important steps to the discovery of Corot-Exo-7b.

Video animation: Artitical representaton, made by Tautenburg Observatory, Germany. The system is to scale ; note that the first third of the video is from a different perspective, without transits.