New observations of the NGC 5240 system show for the first time that it comprises three merging galaxies,which explains the rapid evolution of galaxies in the universe and does not contradict its age. This study, led by German researchers from Göttingen and Potsdam, at the suggestion of the researcher at the Instituto de Astrofísica de Canarias (IAC) Ana Monreal Ibero, has been carried out using a new technique on which the IAC is working, which combines the integral field spectrograph MUSE with adaptive optics on the VLT telescope from Chile. 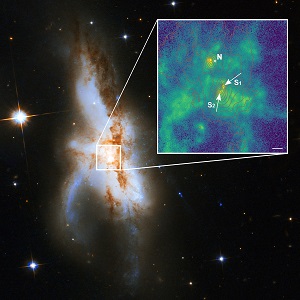 The galaxies contain between 100 and 300 thousand million stars, and at their centres is a black hole with a mass between several million and 100 million times the mass of the Sun. The galaxy NGC 6420 is an irregular galaxy, which is relatively near to us, and which has been studied at practically all wavelengths, as it is considered a prototype of galaxies in its class (interacting galaxies). Given its morphology astronomers thought, until now, that it had been formed by the collision of two smaller galaxies, and therefore contained two supermassive black holes in its interior. These previously merging galaxies had approached one another at speeds of severla hundreds of km/sec and even today the merger process has not finished. REPETICION:. This system of galaxies, situated at some 300 thousand million has been studied in detail over a full wavelength range, and it is considered a prototype interacting galaxy.

"In this study, explains Wolfram Mollatschny, a researcher at the Georg-August University of Göttingen, the first author of the article in Astronomy and Astrophysics, we have used spectral data at very high spatial resolution, we we have found that there are not two, but three black holes inside it. This is the first time that three supermassive black holes have been found so close to each other.. This is observational evidence that three galaxies are merging at the same time."

This finding is very significant in the context of the formation and evolution of galaxies. “ At the present time” says Peter Weilbacher, a researcher at the Leibniz Institute of Astrophysics at Potsdam (AIP) who is another author of the article, “it is difficult for us to explain how the most massive galaxies have had time to form by the merging of two smaller galaxies. With the known age of the universe there has not been enough time for this. However if we assume that there have been mergers of more than two galaxies the evolution of galaxies is much quicker. This results shows that this scenario can exist in nature”

“The interest in this study is not only scientific” explains the IAC astrophysicist Ana Monreal Ibero, another author of the article “ it is also technically interesting because it clearly shows the potential of the joint action of instruments based on integral field spectroscopy and adaptive optics. This duo of techniques are just what is planned in the design of Harmoni, the integral field spectrograph for the Extremely Large Telescope (ELT) in Chile, in which the IAC is participating.

Scientists are predicting that the imminent merger of supermassive black hole will also generate very strong gravitational waves. In the likely future the gravitational wave detector LISA will be able to measure those signals, and discover new merging systems.

Link to the article in Astronomy and Astrophysics: