Total eclipse of the sun: 20TH MARCH. GLORIA will transmit images in real time, from the Faroe Islands 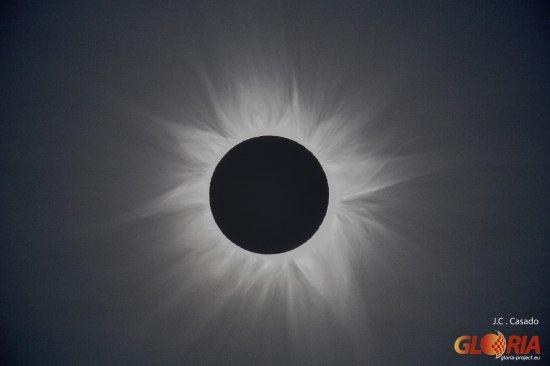 Why have the astronomers in GLORIA chosen such an isolated site from which to send the transmission? Miquel Serra-Ricart, the leader of the expedition explains that “This eclipse will be very hard to observe, because it can only be seen from two arctic archipelagos, the Faroe Islands and Svalbard. The maximum duration of totality with be 2 minutes 47 seconds. In addition the low probability of completely clear skies gives an extra helping of excitement”. In order to choose the correct site Serra-Ricart took into account not only the visibility of the eclipse but also the probability that there would be good atmospheric conditions, the existence of adequate roads, and the security of his team.

This will be the eleventh eclipse expedition to be led by the astronomer of the Institute of Astronomy of the Canaries, (IAC). The first was in 1998, to the middle of the Atlantic. “No two eclipses are alike, and there are always new phenomena to surprise you”. Miquel stresses the features which give added interest to the coming event: the Sun is now close to its maximum activity in the present cycle, number 24 ( solar cycles last around 11 years) and the observation will take place from a spot where you can see auroras. “The probability is very low, but we just might see a double spectacle during the eclipse totality: the solar corona flanked by green auroral lights, what a dream!”

During the eclipse of March 20th Europe will undergo a test of adaptation of its electricity grid to astronomical events which can cause fluctuations in the electricity supply (since 1999 there has not been a total solar eclipse with similar characteristics in Europe, and at that date solar energy made up only 0.1% of the European Union’s energy supply ENTSO-E).

If we note that by 2020 the European Union and its member states are committed to attain a level of 20% of renewable energies for the total energy consumption in the regions “the eclipse is an opportunity to test the impact of events of this type on the stability of the electricity grid. GLORIA with gather environmental data (temperature, pressure, light level, and humidity) registered at Tórshavn, the capital of the Faroe Islands, which it will make available to the experts. We will not have a similar total eclipse in Europe until 2027” adds Miquel Serra. From the data obtained during the eclipse it will be possible to prepare teaching modules for schools. Access to these modules will be through the GLORIA portal, and astroaula.net.

The Centre of Maritime Studies of the University of the Faroe Islands will participate in the broadcast. Three Spanish supercomputing centres: CETA-Ciemat (The Extremadura Centre of Advanced Technology), CSUC (Consoritum of University Services of Catalonia) and the IAC (Institute of Astrophysics of the Canaries) will collaborate in the distribution of the web-portal of the transmission (sky-live.tv).

Information about the broadcast transmission:

Information activities organized during the eclipse (courtesy of OSAE and AAM):