The VI Conference “Science with the Gran Telescopio Canarias” opens 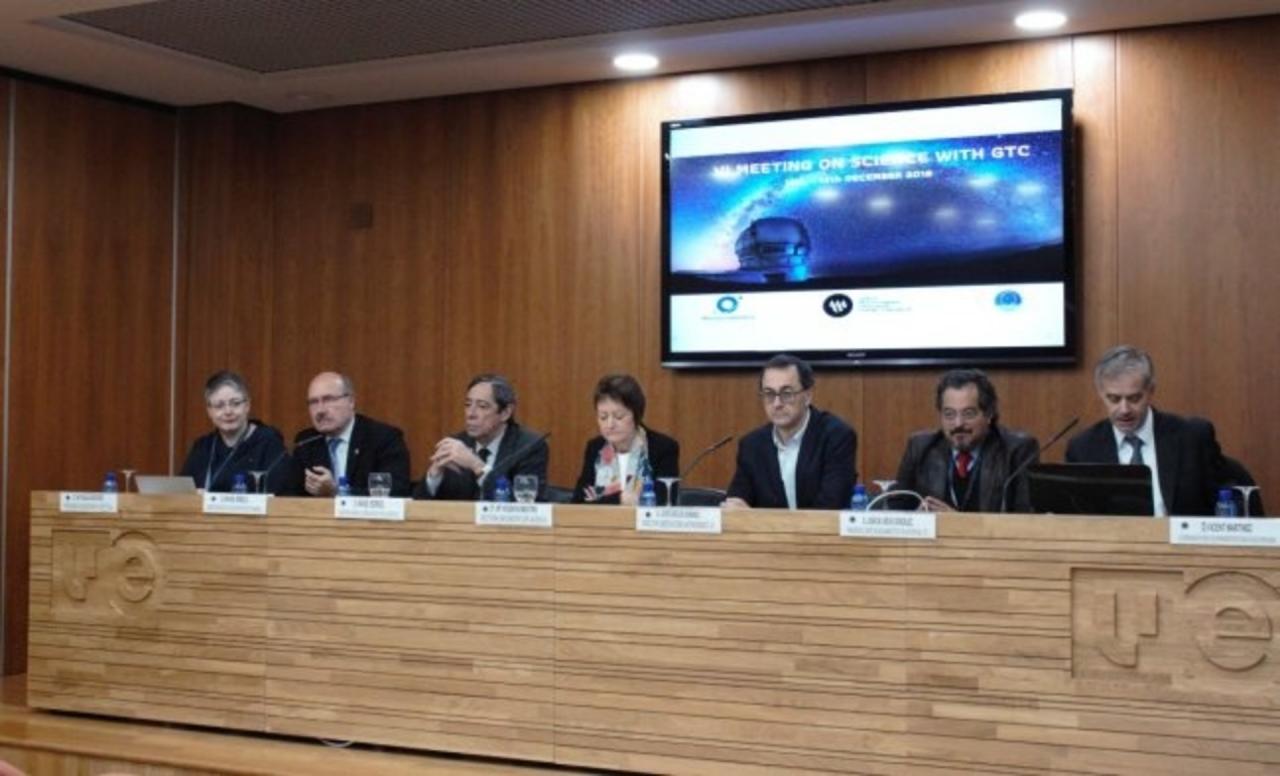 The Gran Telescopio Canarias (GTC), the largest optical and infrared telescope in the world, initiated its observations in 2009. After it has been used for research for nearly 10 years, the VI Conference on Science with the GTC is analyzing the latest results, and future observational strategies.

During the inaugural session María Vicenta Mestre, the Rector of the University of Valencia and the first women to occupy this position in this university, expressed her pride that the University-Business Foundation was the venue for this conference, and José Carlos Guirado, the Director of the Astronomical Observatory of the University stated that “The Gran Telescopio Canarias drives and leads Spanish astronomy”.

Rafael Rebolo López, Director of the Instituto de Astrofísica de Canarias (IAC) dedicated his opening words of thanks to those who promoted the construction of the GTC: Francisco Sánchez, the founder of the IAC, and Pedro Álvarez, the first director of the Telescope. After that Rebolo recognized the efforts of all the partners who have made possible this great astronomical instrument, and stressed his commitment to the telescope. “Since ten years ago the GTC has been at the forefront of Science. We will ensure that this continues to be possible, with a very advanced programme of instrumentation for the new decade".

“A major part of the success of the GTC is due to its site” commented Rafael Rodrigo, the Secretary General for coordination of science policy of the Ministry of Science, Innovation and Universities, “On the island of La Palma geography and climate unite in the environment of the Roque de los Muchachos Observatory to guarantee the astronomical quality”.

The Director of the Institute of Astronomy of the National Autonomous University of Mexico (UNAM) and the chair of the oversight committee of users of the GTC José de Jesús González, said that he was convinced of the need for these meetings. “They have always been catalysts of ideas which make the GTC continue to be increasingly powerful and efficient machine for studying the universo”, he emphsized.

The VI Conference on Science with GTC produced a notable participation from the scientific community. “We hado ver 90 proposals for oral contributions and poster”, noted María Rosa Zapatero Osorio, the scientific organizer of the conference, and Research Professor of the CSIC in the Astrobiology Centre (CAB), but we could fit in only 47 during the three days of the meeting.

The chair of this inaugural session was Vicent Martínez, Professor of Astronomy and Astrophysics at the University of Valencia, and coordinator of the Network of Infrastructures in Astronomy, which incorporates the Singular Scientific and Technical Installations (ICTS) devoted to astronomy in this country. “The Gran Telescopio Canarias is one of them and probably the most singular of all of them. It is a pleasure for us to inaugrate this conference about the science which is being carried out on this telescope”, he said.

After the inaugural session, the Director of the Gran Telescopio Canarias, Romano Corradi, started the scientific session by reviewing the current situation and the challenges facing the GTC during the coming years.

The Gran Telescopio Canarias is funded by the Autonomous Community of the Canaries and by the Spanish State (cofinanced with FEDER funds, Europeaj Funds for Regional Development) with international participation by institutions in Mexico ,IA-UNAM, (the Institute of Astronomy of the National Autonomous University of Mexico), INAOE, (the National Institute of Astrophysics , Optics and Electronics) both cofinanced by the CONACYT (National Council for Science and Technology of Mexico), and the United States (Foundation for Research of the University of Florida).

The Observatories of the Instituto de Astrofísica de Canarias (IAC) and the Gran Telescopio CANARIAS (GTC) are part of the Spanish Unique Scientific And Technical Infraestructures (ICTS) network.