The Ambassador of Portugal in Spain visits the IAC headquarters

João Mira-Gomes, Portuguese Ambassador to Spain, visited the Instituto de Astrofísica de Canarias (IAC) headquarters in La Laguna this morning, together with Vicente M. Álvarez Gil, Portuguese Consul in Santa Cruz de Tenerife, and several members of his team, accompanied by Rafael Rebolo, Director of the IAC, and Mahmoudreza Oshagh, senior postdoctoral researcher. During their tour of the facilities, they were informed about the different projects that are being developed in the framework of the Portuguese-Spanish collaboration.

The IAC participates in several consortiums and scientific collaborations with Portuguese institutions. One outstanding cooperation is with the Instituto de Astrofísica e Ciências do Espaço (IA) of Portugal and the University of Porto (U.Porto) in the ESPRESSO project, a spectrograph installed at ESO's Very Large Telescope (VLT) in Chile, whose two Co-Principal Investigators are Rafael Rebolo (IAC) and Nuno Santos (IA-U.Porto).

The IAC is also collaborating with the University of Coimbra (UC) in the framework of the European Solar Telescope (EST) project. Both institutions have agreed to lead the development of an instrument, based on an Integral Field Unit (IFU) system, for polarimetric observations in the near-infrared (NIR) of the EST. In addition, the IAC works together with Portuguese scientists on the PLATO and EUCLID missions of ESA. 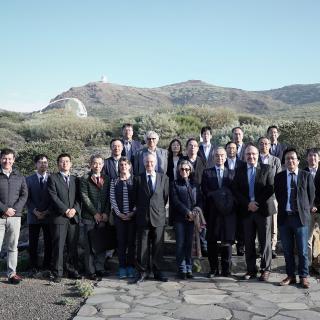 The Japanese ambassador to Spain, Kenji Kiramatsu, yesterday visited the Instituto de Astrofísica de Canarias (IAC) and the Canary Island Observatories, together with Masahiro Aoki, secretary to the Embassy, Yoshihiro Miwa, the consul of Japan in Las Palmas de Gran Canaria, and Josep Piqué Camps, President of the Council of the Spain Japan Foundation. Yesterday, they were received by Rafael Rebolo López, the Director of the IAC and Jesús Burgos, administrator of the General Services of the IAC at its headquarters in La Laguna. After a short visit, the delegation went up to the Teide 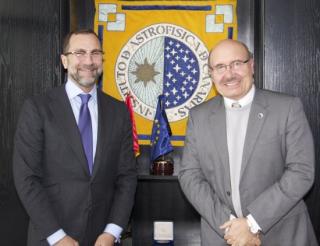 Press release
The US ambassador to Spain visits the IACPHOTO NEWS

The US ambassador to Spain, James Costos, has visited today the headquarters of the Instituto de Astrofísica de Canarias (IAC) in La Laguna, accompanied by the director of the IAC, Rafael Rebolo, and other researchers and engineers from the center. During his visit, he was informed about the research conducted in this institute and in the Canarian Observatories, as well as the technological projects in which the IAC is currently involved. Special attention was paid to the collaborations between the IAC and US research centers -including the Department of Astronomy, University of Florida 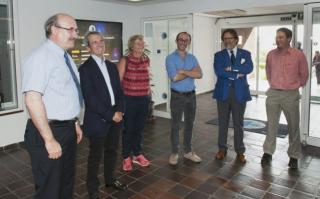 Press release
The French Ambassador to Spain visits the IAC

The French Ambassador to Spain, Yves Saint-Geours, visited the Headquarters of the Instituto de Astrofísica de Canarias (IAC) yesterday morning, and in the afternoon he visited the Teide Observatory, Izaña (Tenerife) accompanied by the Consul, Francisco de Esteban García, in order to learn about the programmes of scientific collaboration in which France and the IAC are jointly involved.During his visit to the Institute, the Ambassador was accompanied by the Director of the IAC, Rafael Rebolo, and was told about the projects of research and technical development in which France is