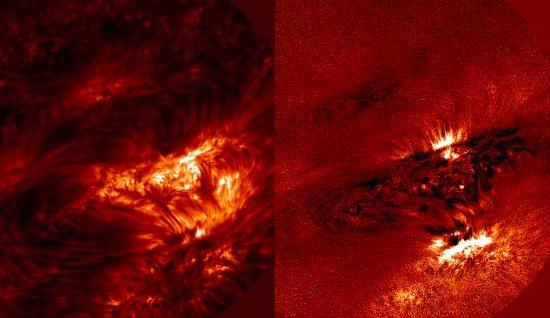 Left: Chromospheric image of a chromospheric active region at -161 mÅ from the core of the Ca II 8542 line, where fibrils are covering almost the entire field-of-view. Right: Circular polarization image (Stokes V) at the same wavelength, quantifies the st
Advertised on
01/01/2011
References
2011, A&A, 527, L8.

Fibrils are thin elongated features visible in the solar chromosphere in and around magnetized regions. Because of their visual appearance they have been traditionally considered a tracer of the magnetic field lines. To our best knowledge, this common conception has never been actually put to test, probably because a proper empirical determination of the chromospheric magnetic field is very challenging, requiring high-resolution spectro-polarimetry in chromospheric lines. In this work we challenge that notion for the first time by comparing their orientation to that of the magnetic field, obtained via high-resolution spectro-polarimetric observations of Ca II lines. The transverse (i.e., projected on the plane of the sky) component of the magnetic field, which is what we are interested in for this work, is determined solely by the observed linear polarization signals (Stokes Q and U profiles). Unfortunately, such signals are typically very weak and their observation presents numerous challenges. In order to extract a clear signal above the noise we select by hand a small segment along the direction of a fibril and average the Stokes Q and U profiles spatially to improve the signal-to-noise ratio. From the profiles thus obtained we can determine the azimuth of the magnetic field on the plane of the sky. Our measurements suggest that fibrils are mostly oriented along the magnetic field direction, however we find evidence of misalignment in some cases.