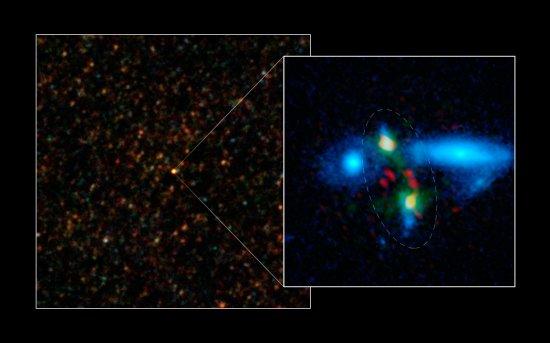 Merging galaxies in the young Universe discovered with Herschel. This image shows the source HXMM01, which was discovered in a survey from ESA's Herschel Space Observatory and comprises a pair of massive and gas-rich galaxies in the process of merging. Th
Advertised on
22/05/2013

An international team, including researchers from the Instituto de Astrofísica de Canarias (IAC) and Universidad de La Laguna (ULL), has detected the formation of a very remote galaxy from the violent collision of two other galaxies

The data, obtained by NASA and ESA space telescopes, and by terrestrial telescopes, contradict a commonly-held theory that explains the formation of massive galaxies from the agglomeration of smaller galaxies over time

When the Universe was three or four million year old it was already populated with massive red elliptical galaxies containing old stars. The scientific community has hotly debated the question of whether these galaxies were formed gradually over time through the merging of smaller galaxies (the most popular and widely accepted scenario), or whether the formation occurred rapidly through the powerful collision of two giant galaxies. A study, shortly to appear in the journal Nature, suggests that it is this latter scenario involving violent collisions and massive merger that generated these 'dead' red galaxies. It seems that peace did not reign in the early days of the Universe.

The Herschel space observatory, a European Space Agency (ESA) mission with the participation of NASA, took images penetrating large clouds of dust of a rare collision involving two giant galaxies. A number of different studies carried out with various space and terrestrial telescopes, including the Hubble Space Telescope and the William Herschel Telescope at Roque de los Muchachos Observatory on the island of La Palma, relate the history of two remote intertwined galaxies in the process of frantically manufacturing stars. The galaxies are expected eventually to settle down and form a single supergiant elliptical galaxy.

'We're looking at an early stage in the life of dead red galaxies, an adolescent explosive phase of activity that won't last long,' says the leader of the research team, Hai Fu, from the University of California (Irvine).

'These merged galaxies are exploding to form new stars and are completely shrouded in dust,' says Ismael Pérez Fournon, a researcher at the Instituto de Astrofísica de Canarias (IAC), professor at the University of La Laguna and coauthor of the study. 'Without the sensitive far-infrared detectors of the SPIRE instrument on board the Herschel, we would not have been able to see the activity veiled behind the dust,' he adds.

The 'lensing' effect of the galaxies

The Herschel space telescope was used to identify galaxies (named HXMM01) in the process of collision, located some 11 thousand million light years away, at a time when our Universe was about three thousand million years old. At first, the astronomers thought that the two objects were different magnified images of a single galaxy. The 'lensing' effect produced by other galaxies along the path of light emitted by reddened galaxies is fairly common in astronomy and is produced when the gravity of a foreground galaxy 'bends' the light coming from a more distant object. After a meticulous investigation, however, the team realized that what they were really seeing was two massive galaxies merging.

Analysis of the galaxy pair in collision revealed that they were generating the equivalent power of 2000 suns per year.In comparison, the Milky Way 'incubates' around two or three solar-type stars a year. The two galaxies contain a total of around 400 thousand million stars. Mergers are fairly common in the Universe, but this particular event is unusual, given the prolific quantitities of gas and stars in formation, as well as the great intensity of the merger for such a remote epoch.

As Paloma Martínez Navajas, an IAC researcher and coauthor of the paper, emphasizes, 'observations made with the LIRIS instrument on the William Herschel Telescope helped determine the great stellar mass of the two distant galaxies. Medium-sized telescopes equipped with infrared instruments continue to be fundamental to this type of study.'

The entire Herschel database at the disposal of the scientific community

These results are to be published shortly after the Herschel Space Observatory is to end its mission as its helium supply, which maintains its three instruments at low temperatures, becomes exhausted. Herschel was launched into space together with the Planck satellite on 14 May 2009. In these four years, Herschel has carried out some 35,000 observations for 600 scientific programmes during more than 25,000 hours of observation. It has also produced more than 600 scientific publications.

The greater part of the astronomical data obtained are already freely available for scientific exploitation in the Herschel archive and will be used by the international scientific community in the coming decades. There will be no other space observatory operating in Herschel's wavelength range at least until 2022.

For further information and interviews:

Additional information: The IAC is a member of the international consortium that built the SPIRE instrument on board Herschel since its foundation at the end of the nineties, which has enable the Herschel/SPIRE team of the IAC to participate in HerMES, the largest project carried out with Herschel, being a study of the different aspects of galaxy evolution in the distant Universe based mainly on observations with the SPIRE camera of Herschel.