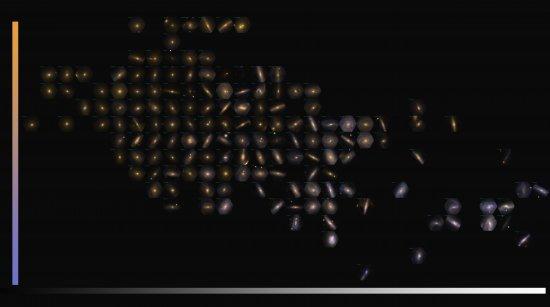 The colour-magnitude diagram of 151 galaxies observed by CALIFA. For each galaxy it is shown a true-color image created using the B (blue), V (green) and R (red) band reconstructed images extracted from the CALIFA datacubes. In this diagram, the galaxies
Advertised on
31/10/2012

The Calar Alto Legacy Integral Field Area survey (CALIFA survey),  that counts with the participation of the Instituto de Astrofísica de Canarias (IAC), announces today its first public release of data, offering an unprecedentedly detailed view of one hundred galaxies in the local universe with ample opportunities for scientific study.

Together with the data release, two technical publications authored by members of the CALIFA collaboration have been made publicly available, describing the data and showing some of their scientific applications.

The Calar Alto Legacy Integral Field Area survey (CALIFA survey),   that counts with the participation of the Instituto de Astrofísica de Canarias (IAC),  announces today its first public release of data, offering an unprecedentedly detailed view of one hundred galaxies in the local universe with ample opportunities for scientific study. Together with the data release, two technical publications authored by members of the CALIFA collaboration have been made publicly available, describing the data and showing some of their scientific applications.

“I am tremendously happy to see a dream come true" says Sebastián Sánchez, Principal Investigator of CALIFA. "When we first thought of CALIFA, five years ago, the perspective of releasing such wonderful data seemed far off, yet it is happening right now! We hope and expect that the scientific community will make use of the opportunity”, points out Sánchez.

Galaxies are the end products of cosmic evolution along cosmological times, and their secret history is hidden in the properties of their different components. CALIFA is an on going project running at Calar Alto Observatory, focused on characterizing the galaxies in the local universe with unprecedented detail, trying to uncover these ‘archaeological treasures’.

To this end, CALIFA uses the technique called integral field spectroscopy (IFS) to obtain data of 600 galaxies in the local universe. Traditional observational studies in extragalactic astronomy used one of two classical techniques: either imaging, which gives detailed information about the spatial extent of galaxies, or spectroscopy, which gives detailed information about many properties of galaxies, but no or very little information on the spatial distribution of them. The recent technology of IFS allows taking a multitude of simultaneous spectra at many points on each galaxy, thanks to a clever combination of fibre optics and classical techniques. CALIFA is the first IFS study to be explicitly designed as a legacy project and, upon completion, it will be the largest survey of this kind ever accomplished.

The integral field spectrograph used for the CALIFA survey at Calar Alto Observatory, PMAS (in a special configuration called PPAK) uses more than 350 optical fibres to cover a field of view of one square arcminute (equivalent to the apparent width of a 1 euro coin placed at a distance of approximately 80 metres). This way, a complete extended object, such as a galaxy, can be fully mapped in detail in just one exposure.

Maps to ‘surf’ the history of cosmos

The delivered data allow producing maps for the different properties of galaxies, such as velocity, stellar ages or chemical composition, to mention just a few. This information will yield new insights in several key issues linked to the structure and history of galaxies in the universe. It is expected to reach results, for instance, on which processes drove galaxy evolution in time, how the chemical elements needed for life are produced inside different galaxies or at different regions inside individual galaxies, the phenomena involved in galaxy collisions… This wealth of information allows to uncover the history not only of an entire galaxy, but also of its different components.

"The amount of science we can do is simply incredible" says Jakob Walcher, Project Scientist of CALIFA. "We can study local processes that drive galaxy evolution and that happen at different places in the galaxies, such as star formation, dynamical effects etc. But we also globally characterize the properties of galaxies in the local universe in a way that was not possible before. For example we map the 2D distribution of the stellar mass and chemical elements in the galaxies. Finally, our large sample will allow us to draw comparisons between different galaxy types”, adds Walcher.

Calar Alto Observatory is jointly operated by the Max Planck Institute for Astronomy (MPIA-MPG, Heidelberg, Germany) and the Astrophysical Institute of Andalusia (IAA-CSIC, Granada, Spain). The Observatory has guaranteed 250 observing nights (distributed along three years) for the CALIFA survey with the 3.5 m Zeiss reflector, supporting the acquisition, reduction and data storage processes. To accomplish this enormous effort the concourse of a large collaboration of astronomers is required, its composition reflecting the dual Spanish/German heritage of the Observatory. However, it also includes participants from all over the world, comprising a total of 80 people from 13 nations spread among 25 research institutes, from so far away as Australia and Canada or the USA.

With ten scientist involved in the CALIFA survey, coordinated by Jesús Falcón, the Instituto de Astrofísica de Canarias (IAC) is one of the major partners of the collaboration. The IAC is the leading group in the study of all aspects of the kinematics in galaxies: from the stellar angular momentum and emission-line kinematics to the pattern speed of bars in spiral galaxies. These studies on the large morphological coverage of the CALIFA survey will provide an unbiased view of the dominant processes driving the evolution and fate of galaxies.

An example of the scientific results that can be obtained from CALIFA data: A stack of maps of one galaxy (NGC 5406) displaying the spatial distribution of several properties; from top down: emission from ionized hydrogen, velocity of the gas inside the galaxy, estimated age of the stellar population, brightness in the visual band.