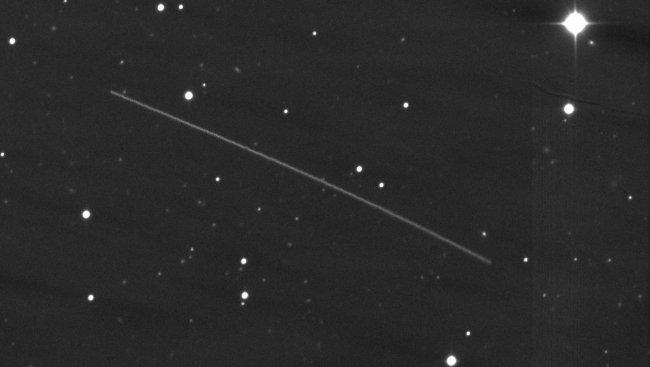 Trajectory of the NEO 2015TB145 (track on the image against a background of stars) on the night of 27th October for three hours. The observations were taken by Ovidio Vaduvescu at the Isaac Newton Telescope (INT) at the Observatorio del Roque de los Mucha
Advertised on
29/10/2015

The Canary Observatories are following the trajectory of the asteroid 2015 TB145 during the nights before its closest approach to the Earth, on October 31st, in the framework of the international EURONEAR collaboration.

From the Teide Observatory (OT) in Tenerife they are obtaining images of this asteroid in visible light with the IAC80 and TAD  (Telescopio Abierto Divulgación) telescopes. The idea is to calculate its period of rotation by measuring how it varies in brightness with time.

From the Roque de los Muchachos Observatory (ORM) in La Palma they will try to obtain spectra in the visible and the infrared using instruments on the William Herschel Telescope (WHT) and the National Galileo Telescope (TNG) in order to obtain information about the surface composition of 2015 TB145. A fifth telescope, the Isaac Newton Telescope (INT) is also making fotometric measurements in the visible. In the first images from the INT we can already see the asteroid moving towards its perigee (point of nearest approach to the Earth) and can observe variations in brightness which show that it has a rotation period of four hours.

2015 TB145 is a very interesting object for two main reasons. Firstly it is potentially dangerous. It is a very big NEO (Near Earth Object) which measures between 270 and 590 metres across, which will pass very close to our planet, a 486,000 kilometres, (1.3 times the distance to the Moon). In the future its orbit could bring it into collision with the Earth, and its close passage now gives us a unique opportunity to make a better measurement of its orbit.

The second reason is that we need to know whether it really is an asteroid, or perhaps an inactive comet. Its orbital parameters are those of an extinct or dormant comet, objects which in astronomical parlance are known as ACO’s (Asteroids in Cometary Orbits). 2015 TB145 could be a “retired” comet, which has passed close to the Sun so many times (it passes close to the Sun every three years) that it has lost the volatile materials from its surface, which has become covered in a layer of dust, so it shows no activity in the form of a tail or coma.

Finding whether its physical properties are those of a comet would give us information about its nature, and give us useful data about the presence of these objects in the population of NEO’s. The main objective of the observations, then, is to discover the true nature of 2015 TB145 : comet or asteroid. This is critical when we make plans to deviate it if we discover that it has a reasonably high probability of colliding with the Earth in the future.