The dance of the small galaxies that surround the Milky Way 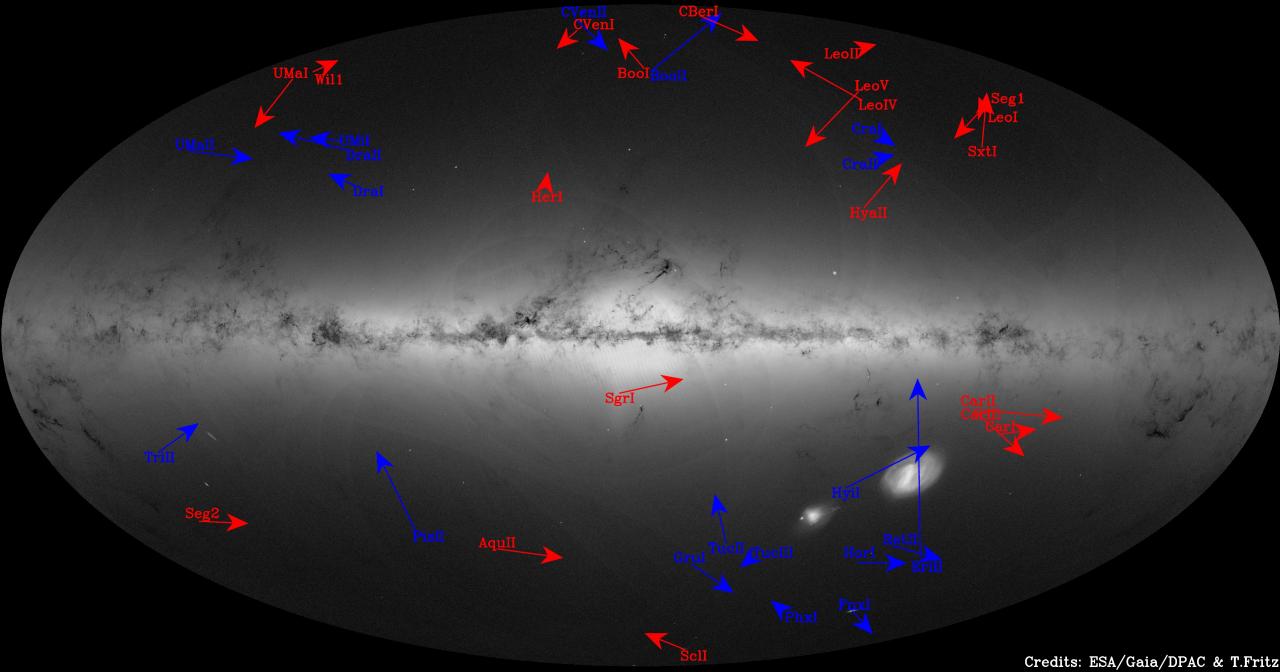 Motions of the 39 dwarf galaxies. In the background we show the image built from point sources in Gaia One can only see the brightest dwarf galaxies, and even theyy are barely visible. The galaxies are labeled with their names, and the arrows show the dir
Advertised on
13/11/2018
Authors
Alejandra
Rueda Moral

Around the Milky Way there are many small galaxies (dwarf galaxies), which can be tens of thousands of times or even millions of times less luminous than the Milky Way. In comparison with normal or giant galaxies, dwarf galaxies contain much less stars and therefore their luminosity are smaller. These small galaxies have been the subject of the study of an international team of astronomers led by Tobias K. Fritz and Giuseppina Battaglia, both researchers of the Instituto de Astrofísica de Canarias (IAC). Thanks to the data acquired by the ESA Gaia space mission, which became available in their second release in April 2018, the researchers have been able to measure the on-sky motion of 39 dwarf galaxies, determining its direction and velocity. Before the second release of data from the Gaia satellite, it had not been possible to perform such measurements for 29 of the galaxies analyzed by the team. The researchers found that many of them are moving in a plane known as the vast polar structure. “It was already known that many of the more massive dwarf galaxies were found in this plane - says Fritz, main author of the scientific article -, but now we know that also several of the less massive dwarf galaxies might belong to this structure”. Battaglia highlights that the origin of ‘the vast polar structure’ is still not fully understood but its characteristics appear to challenge cosmological models of galaxy formation. “Also the Large Magellanic Cloud is found in this planar structure, which might imply the two are connected”. By analyzing the data concerning the motions, the team found that several of the dwarf galaxies have orbits that bring them close to the inner regions of the Milky Way. The gravitational attraction that the Milky Way exerts on these galaxies can be compared to the action of tides. “It is likely that a few of the dwarf galaxies studied are perturbed by these tides, which stretch them like a stream”. In this way one could explain the observed properties of some of these objects, such as Hercules and Crater II”, comments Fritz. On the other hand, new questions arise. “Over the years some galaxies have been observed to have peculiar characteristics that could have been potentially due to tidal perturbations by the Milky Way  (e.g. Carina I) - indicates Battaglia -, however their orbits do not appear to confirm this hypothesis. Perhaps we should postulate that encounters with other dwarf galaxies might have been the culprit”. The orbits determined allowed the researchers to detect that the majority of the galaxies studied are found close to the pericenter of their orbit (the point closest to the Milky Way center). Nonetheless, basic physics explains that they should spend most of their time close to the apocenter of their orbit (the point farthest from the Milky Way center). “This suggests that there should be many more dwarf galaxies that have yet to be discovered and that are hiding at large distances from the Milky Way center”, states Fritz. Dwarf galaxies, besides being interesting in their own right, are one of the few tracers of dark matter that can be used in the most external parts of the Milky Way. It is thought that this kind of matter accounts for about 80% of the total mass of the Universe. However, it cannot be observed directly, therefore its detection is difficult. The movements of celestial bodies such as dwarf galaxies can be used to measure the total mass of matter within a volume. To this aim, one subtracts the mass of those luminous objects that are detected and obtains an estimate of the amount of dark matter. From this data, the researchers could infer that the amount of dark matter in the Milky Way is large, about 1.6 trillion solar masses.   Links of interest: