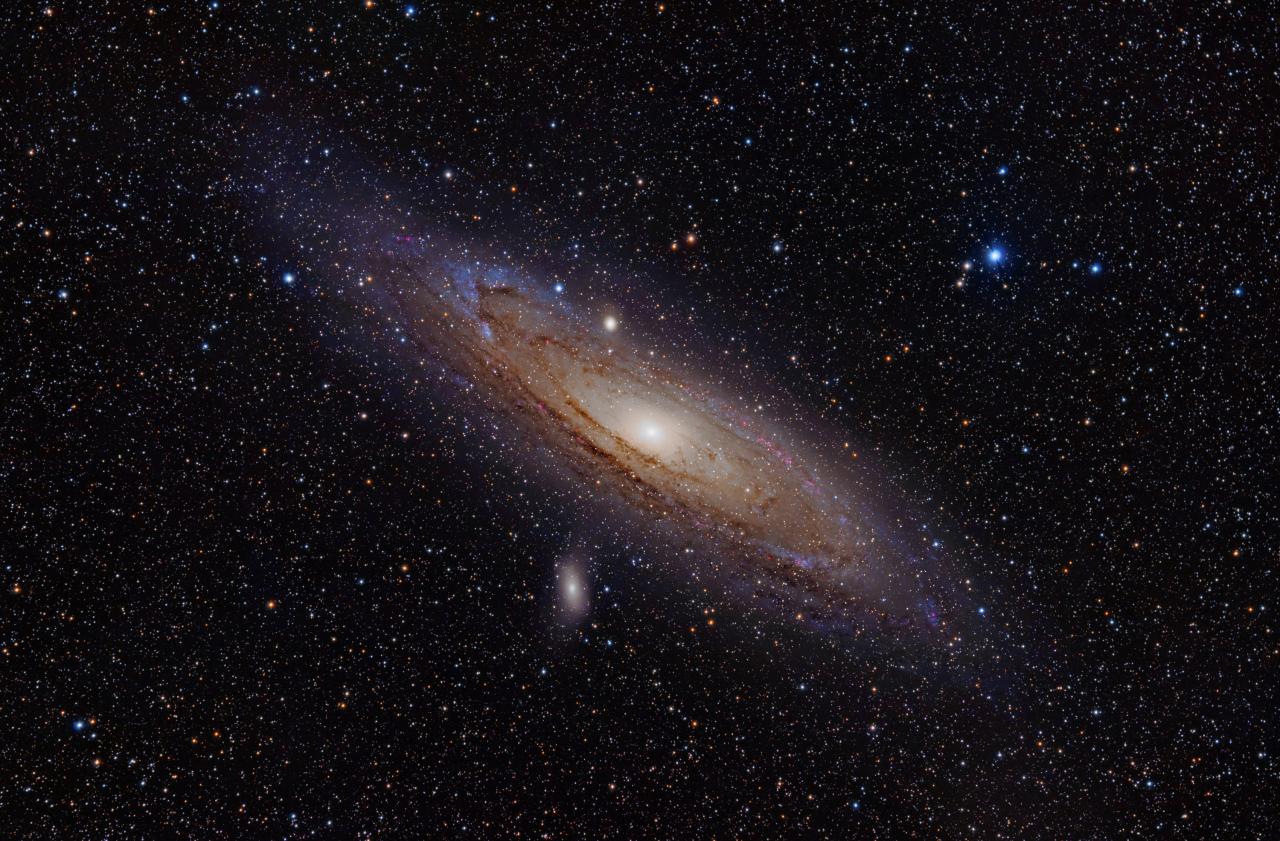 The M31 Galaxy, more commonly known as the Andromeda Galaxy, is a spiral galaxy situated some 2- 2.5 million light years from us in the direction of the constellation of Andromeda. Credits: Adam Evans/wikipedia.
Advertised on
13/01/2015

The nearby spiral galaxy M31, better known as the Andromeda Galaxy, is situated only 2 million light years from Earth. The next nearest similar galaxy to ours, and to M31, in size is ten times further away, so it is especially interesting to study its properties

But in spite of its similarities to the Milky Way, Andromeda shows differences. For example it has a significant number of very bright planetary nebulae [1] well outside its inner disc.

Just as in the Milky Way, the inner disc is the zone where stars of a variety of sizes are being born and die. Discs of this kind are common in galaxies, and they give rise to many exceptionally bright planetary nebulae, which form as late stages in the evolution of moderately massive stars.

However we would not expect to see this type of planetaries well outside the inner disc because at those large radii the stars are old, and any star of reasonably high mass should have disappeared long ago [2]. This is because massive stars use their fuel much more rapidly than lower mass stars, and so have much shorter lifetimes.

Nevertheless there they are: very bright planetary nebulae in the outer regions of the Andromeda Galaxy, at the outer edges of its disc.

For Bruce Balick, of the Astronomy Department of the University of Washington (USA), who led this piece of research: “The area surrounding M31 is a continent in the sky. It took an enormous effort lasting over a decade by a British group to detect the planetaries in the first place, but once localized they are easy to find”.

Studying the oxygen with the Gran Telescopio Canarias (GTC)

The authors of this article used the GTC and other telescopes to observe the spectra of these objects and to determine the amount of oxygen in their layers of emitting gas. They chose to study oxygen because the oxygen lines are much brighter than those of most elements (only hydrogen and helium produce brighter lines, and in any case oxygen emission is a defining characteristic of planetaries).

To carry out the study correctly they had to observe a number of oxygen lines, but not only the brighter ones; a key line is a weak line at 436 nanometres of wavelength, and for that they needed large telescopes such as the GTC.

The results were surprising: these very bright planetary nebulae, which should not even exist in a region which is so far from the centre of M31 and from the spiral arms, contain almost as much oxygen (always measured using the hydrogen content as a standard) as the Sun. This contrasts strikingly with the fact that the stars in this part of M31 contain a fraction of iron which is only some 10% that of the Sun. But why is that so important?

The reason why the stars right at the edges of galaxies have low iron abundances is because they are virtually as old as the galaxies themselves. Given that in general new stars have not been forming out there, the stars we see are those which formed at the beginning of the history of the galaxies, when there were far smaller quantities of heavy elements in the Universe.

According to Romano Corradi, resarcher at the Astrophysics Institute of the Canaries (IAC), and a member of the research team: “Until now, work on the standard model of galaxy formation in the Universe suggested that these outer zones have been formed by the gradual assimilation of tiny 'dwarf' galaxies, formed very early in the history of the Universe, which ended up forming the outer reaches of a galaxy: its stellar halo and outer disc, but the oxygen-rich planetary nebulae in the outer parts of Andromeda tell a very different story”.

What makes this so interesting? It tells us about the history of Andromeda iself. These results suggest that these stars were trapped in Andromeda during an encounter with its companion spiral M33, “The Triangulum Galax”, which took place some 3,000 million years ago. The encounter was not a head-on collision. On the contrary, the two galaxies brushed past each other. During the encounter the gravitational force of each galaxy acted on the other one, perturbed the gas and stars in the zone of the encounter, and part of the gas was in fact thrown clear. It is possible that from this oxygen-rich gas were formed the stars of moderately high mass which in the latter stages of their lives have given rise to the bright planetary nebulae which we observe at large distances from the centre of Andromeda.

The planetary nebulae and the iron-rich stars don´t necesary prove that this idea is correct. However, an encounter between M31 and M33 is the easiest way to explain why these objects are present only in M31 among all the many galaxies in the Local Group where we might have been able to detect them.

Another much more dramatic encounter awaits the Andromeda galaxy: an encounter with the Milky Way in some 5,000 million years, just before our Sun will run out of its hydrogen. This will indeed be a genuine collision, and both galaxies will suffer the consequences. It is even possible that the Sun, now in the disc of the Milky Way, may be flung out to great distances, into the halo. One can imagine the night sky during the time when the remnants of this crash between the Milky Way and Andromeda are being flung out into deeper space.

[1] Planetary nebulae are the gaseous shells expelled from the outer layers of moderately massive stars (those having masses between one and eight times the mass of the Sun), at the end of their “normal” lives. They are hollow spheroidal clouds of gas and dust, which have, at their centres, white dwarf stars, which are the very hot, dense remains of the central parts of the original stars.

[2] Some studies suggest that almost all the stars in these stellar populations are at least 8,000 million years old.

This study has been published as a scientific article “Metal-Rich Planetary Nebulae in the Outer Reaches of M31” in the journal The Astrophysical Journal, Volume 774, Number 1 (doi:10.1088/0004-637X/774/1/3) and the authors are B. Balick (Department of Astronomy, University of Washington, USA), K.B. Kwitter (Department of Astronomy Williams College, Williamstown, USA), R.L.M. Corradi (IAC), and R.B.C. Henry (H.L. Dodge Department of Physics and Astronomy, University of Oklahoma, Norman, Oklahoma, USA).

Link to the published article: “Metal-Rich Planetary Nebula in the Outer Reaches of M31”