Discovery of interstellar dust in the reionization era of the Universe: ALMA observations of a z=8.38 galaxy amplified by the gravitational lensing effect of the galaxy cluster Abell 2744 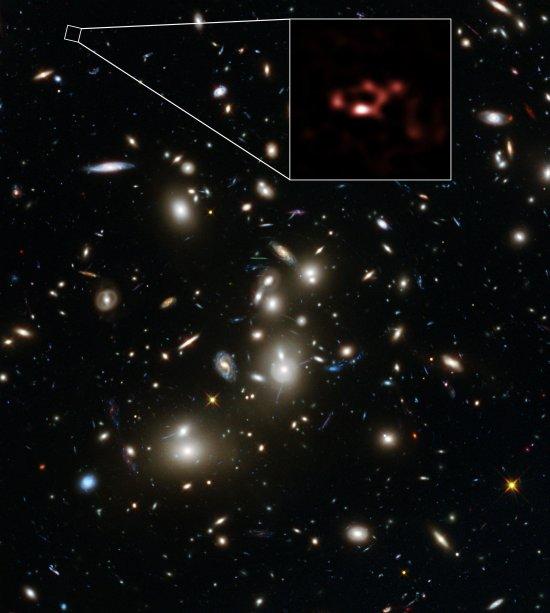 The first billion years of cosmic history represents the final frontier in assembling a coherent physical picture of early galaxy formation, and a remarkable progress in this area has been made in the last few years. We have carried out a detailed analysis of a gravitationally lensed galaxy A2744_YD4 at z = 8.38 behind the massive galaxy cluster Abell 2744. The photometric redshift of about 8, estimated from HST, VLT and Spitzer data, was confirmed by the detection of the Ly_alpha line at a redshift of z=8.38 in a deep VLT X-SHOOTER spectrum. The follow-up observations with the Atacama Large Millimeter/submillimeter Array (ALMA) detected a significant 1 mm continuum flux indicative of the presence of dust in a very young star-forming galaxy. The ALMA spectrum showed also ionized oxygen at the same redshift. This is the most distant, and hence earliest, detection of dust and oxygen in the Universe. A2744_YD4 contained an amount of dust equivalent to 6 million times the mass of our Sun, a total stellar mass of 2 billion times the mass of our Sun, and a star formation rate ~ 20 solar masses per year. The detection of dust in this early epoch of the Universe provides key information on when the first supernovae exploded and hence the time when the first stars appeared in the Universe.