Evidence for rotational motions in the feet of a quiescent solar prominence. 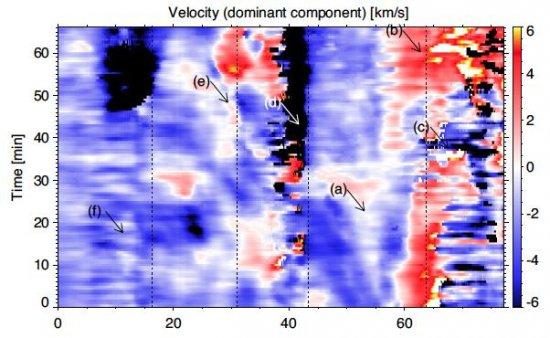 Doppler shifts resulting from a two-components Gaussian fit of the He I 10830 triplet intensity profiles. The velocity is saturated at ± 6 km/s. Vertical lines delimit the prominence feet.
Advertised on
01/01/2012
References
2012, ApJ, 761, L25

We present observational evidence of apparent plasma rotational motions in the feet of a solar prominence. Our study is based on spectroscopic observations taken in the \ion{He}{1}~1083.0~nm multiplet with the Tenerife Infrared Polarimeter attached to the German Vacuum Tower Telescope. We recorded a time sequence of spectra with 34 s cadence placing the slit of the spectrograph almost parallel to the solar limb and crossing two feet of an intermediate size, quiescent {\it hedgerow} prominence. The data show opposite Doppler shifts, $\pm$~6\kms, at the edges of the prominence feet. We argue that these shifts may be interpreted as prominence plasma rotating counterclockwise around the vertical axis to the solar surface as viewed from above. The evolution of the prominence seen in EUV images taken with the {\it Solar Dynamic Observatory} provided us clues to interpret the results as swirling motions. Moreover, time-distance images taken far from the central wavelength show plasma structures moving parallel to the solar limb with velocities of about $10-15$\kms. Finally, the shapes of the observed intensity profiles suggest the presence of, at least, two components at some locations at the edges of the prominence feet. One of them is typically Doppler shifted (up to $\sim$~20\kms) with respect to the other, thus suggesting the existence of supersonic counter-streaming flows along the line-of-sight.