The excitation of solar-like oscillations in a delta Scuti star by efficient envelope convection. 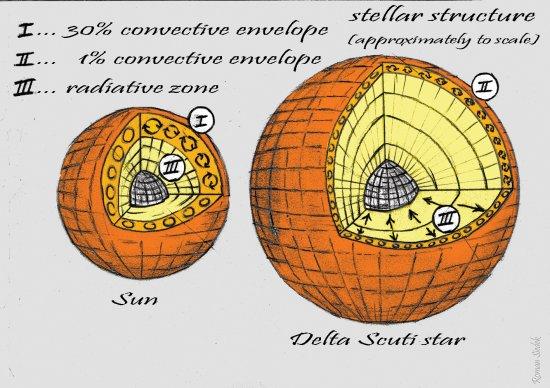 Delta Scuti (δ Sct) stars are opacity-driven pulsators with masses of 1.5-2.5M⊙, their pulsations resulting from the varying ionization of helium. In less massive stars such as the Sun, convection transports mass and energy through the outer 30 per cent of the star and excites a rich spectrum of resonant acoustic modes. Based on the solar example, withno firm theoretical basis, models predict that the convective envelope in δ Sct stars extends only about 1 per cent of the radius, but with sufficient energy to excite solar-like oscillations. This was not observed before the Kepler mission, so the presence of a convective envelope in the models has been questioned. Here we report the detection of solar-like oscillations in the δ Sct star HD 187547, implying that surface convection operates efficiently in stars about twice as massive as the Sun, as the ad hoc models predicted.