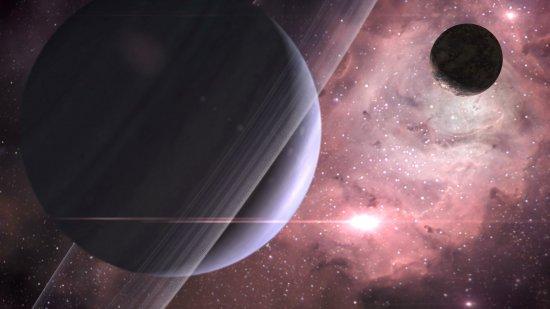 Artist's impression of a planetary system, with a giant planet in the foreground and one of its moons occulting the central star. Copyright: Gabriel Pérez Díaz, Instituto de Astrofísica de Canarias (Servicio MultiMedia)
Advertised on
23/10/2013

When the first exoplanet was discovered orbiting a star in 1995 the astrophysics community could not have imagined that, two decades later, the study of exoplanets would form one of the fundamental pillars of modern astronomy, and that the number of exoplanets discovered would reach a total of 1000, as attested by the latest edition of The Extrasolar Planets Encyclopaedia.

With the excuse of having reached such a round number of planets found we now present you with so key facts on these distant worlds beyond the Solar System. For this we let Hans Deeg and Roi Alonso, researchers at the Instituto de Astrofísica de Canarias (IAC) and both pioneers in the search for extrasolar planets, explain in their own words.

Figure 1: Schematic overview of the radial-velocity method for detecting extrasolar planets. The star wobbles slightly owing to the gravitational pull of the planet. For an observer on the Earth, this motion of the star causes a subtle redward or blueward shift in the colour of its light (the Doppler effect).

Figure 2: With the transit method the brightness of a star is monitored over time. If a slight drop in  brightness is detected, this could be caused by the passage of a planet in front of the star. Artistic simulation of the planet CoRoT-9b orbiting its star. Copyright: Gabriel Pérez, Servicio Multimedia del IAC

For further information and interviews: