Explanation of the linear polarization of the Ca II IR triplet: zero-field dichroism in the solar chromosphere 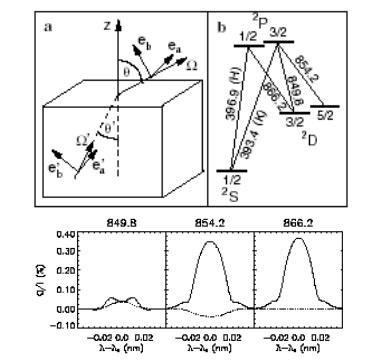 The linear polarization produced by scattering processes in the spectral lines of the IR triplet of Ca II can be observed near the edge of the solar disk. The cause of this polarization was considered a true enigma until the year 2003, in which IAC researchers could carry out sophisticated calculations based on the quantum theory of the spectral line polarization. In this way, they could demonstrate that the physical origin of the enigmatic polarization is the presence of "atomic polarization" in the lower levels of such spectral lines, which produces dichroism (i.e., selective absorption of the polarization components of the radiation beam that propagates towards the observer) without the need of a magnetic field. This result is important because it provides a way to detect extremely weak magnetic fields in Astrophysics, both in the solar atmosphere and in other astrophysical plasmas (e.g., in the atmospheres of supernovae).